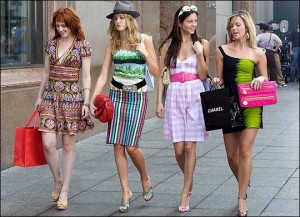 Sex and the City is unboubtably one of the most successful premium cable series in television history and HBO would like nothing more than to continue the cosmopolitan saga on it’s air.  The network is proposing a project based on Candice Bushnell’s novel The Carrie Diaries, a SATC prequel focusing on Carrie Bradshaw’s teenage years.    The project could end up on a network such as The CW.

“Discussions are underway for The Carrie Diaries, Candice Bushnell’s book about Carrie Bradshaw’s high school years, to find a home as a potential television series,” confirmed an HBO representative.

The latest Sex and the City movie featuring the adult cast was a bit of a disappointment for critics, as well as at the box office.  The Carrie Diaries starts with Carrie’s senior year in high school in the 1980s and continues to her first internship in New York City. Samantha Jones is in the story, but the other SATC characters are not.  (The above picture is a mockup / cos-play… calm down, people!)

So what do you think SatC fans?  Are you glad just to have more content or are your more worried that it won’t live up to the magic of the original, or worse yet, take away from it?  Share your comments below!

UPDATE:  The show has gone to The CW.