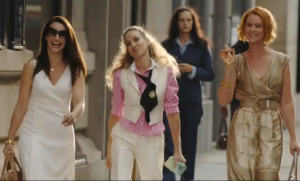 We had just announced the likelihood of a continuation of this series a bit ago and, just like that, it fell into place. The lives of Carrie Bradshaw, Miranda Hobbes and Charlotte York in their later years will play out but this time on HBO Max. Here is the official announcement:

HBO Max has given a series order to AND JUST LIKE THAT…, a new chapter of the groundbreaking HBO series, “Sex and the City,” from executive producer Michael Patrick King and starring Sarah Jessica Parker, Cynthia Nixon and Kristin Davis. The new Max Original series is based on the book, “Sex and the City,” by Candice Bushnell and the original TV series created by Darren Star. The series will follow Carrie, Miranda and Charlotte as they navigate the journey from the complicated reality of life and friendship in their 30s to the even more complicated reality of life and friendship in their 50s. The ten-episode, half-hour series is scheduled to begin production in New York late spring.

“I grew up with these characters, and I can’t wait to see how their story has evolved in this new chapter, with the honesty, poignancy, humor and the beloved city that has always defined them,” said Sarah Aubrey, Head of Original Content, HBO Max.

AND JUST LIKE THAT… is executive produced by Sarah Jessica Parker, Kristin Davis, Cynthia Nixon, and Michael Patrick King.

Samantha Jones, Kim Cattrall’s character from the original series and its two movies, is not likely to appear unless totally recast because Cattrall had made it clear she was done with the franchise back in 2019. USAToday curated some responses related to Cattrall’s absence:

Fans commented on Parker’s Instagram post about the lack of Samantha, including @j.asminemartin who explained that “they dislike each other.” Parker replied: “I’ve never said that. Never would. Samantha isnt (sic) part of this story. But she will always be part of us.” Another user, @sylviasalcedola, wrote that she “will miss Kim/Samantha.” Parker wrote back, “we will too. We loved her so.”

Though Cattrall has not posted a statement about the show on social media, she did like a tweet from a fan pointing out her absence from the project.

“I absolutely love Sex and the City and whilst I am saddened that Samantha will not return, I applaud doing what is best for you and think this is great example of putting yourself first,” reads the tweet from user @charlieronce, posted Monday. “Well done @KimCattrall”

Cattrall also liked another tweet posted Monday by @TheWomensOrg. The account retweeted an image of a 2019 statement from Cattrall, in which she said, “I don’t want to be in a situation for even an hour where I’m not enjoying myself.” The account added: “We couldn’t agree with you more on this one @KimCattrall.”

Despite all that, we can be assured that Parker, Nixon and Davis will collectively put their best well-fashioned foot forward to make an exciting sashay through NYC when the ladies return to look at love & life in the city once again.