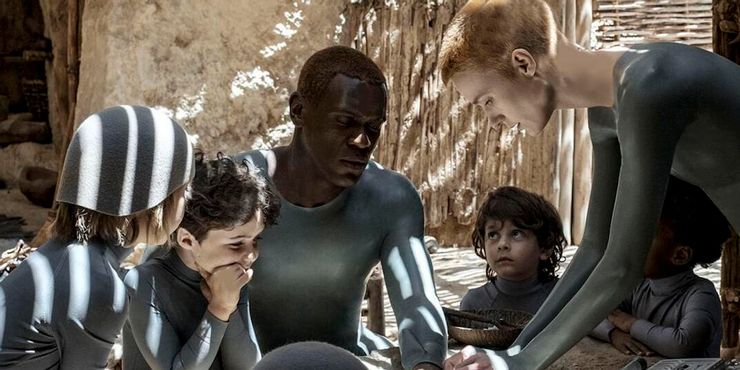 On one hand, with the first three episodes, we are given inspired performances, stellar direction, captivating cinematography, and near theatrical release quality special effects. On the other hand, we are given concepts and plot points that would be abstract and pompous to even the most open-minded viewer.  Nevertheless, for better or worse (in this reviewer’s opinion, for the better), Raised by Wolves is the first notable original series to be spawned from HBO Max. 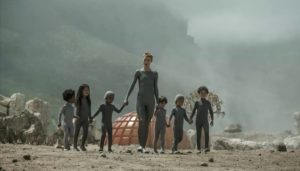 Episode 1 & Episode 2: “Raised by Wolves” and “Pentagram” are helmed by legendary director Sir Ridley Scott. The pilot episode opens with a sleek spacecraft breaking Kepler-22B’s (named after an actual exoplanet) atmosphere and making a rough landing on the rough terrain.   The craft lands near a deep hole, which initially appears to be a crater. It is later revealed to be a hole burrowed by a giant creature.   The two pilots of the craft, Mother and Father, barely escape before it plummets into the dark abyss.   Mother and Father are two service androids that are assigned to birth, raise, and at all costs protect human beings. Mother plugs her artificial umbilical cords into artificial wombs that grow the embryos for nine months as Father looks on as a watchful guardian.  During the birthing, one of the children seemingly dies, deeply saddening the artificial guardians.  Fortunately, the baby is able to be revived.  However, tragedy strikes as all of the children die over the course of a 5-7 year time span, with the exception of young Campion.  Campion is the baby that nearly died during birth. He believes “that something may be inside of him.”  This something inside of him may be of divine or advanced secular power, as this series is set after a war between Christians and atheists.  The potential of this mystery could sink or elevate this series. 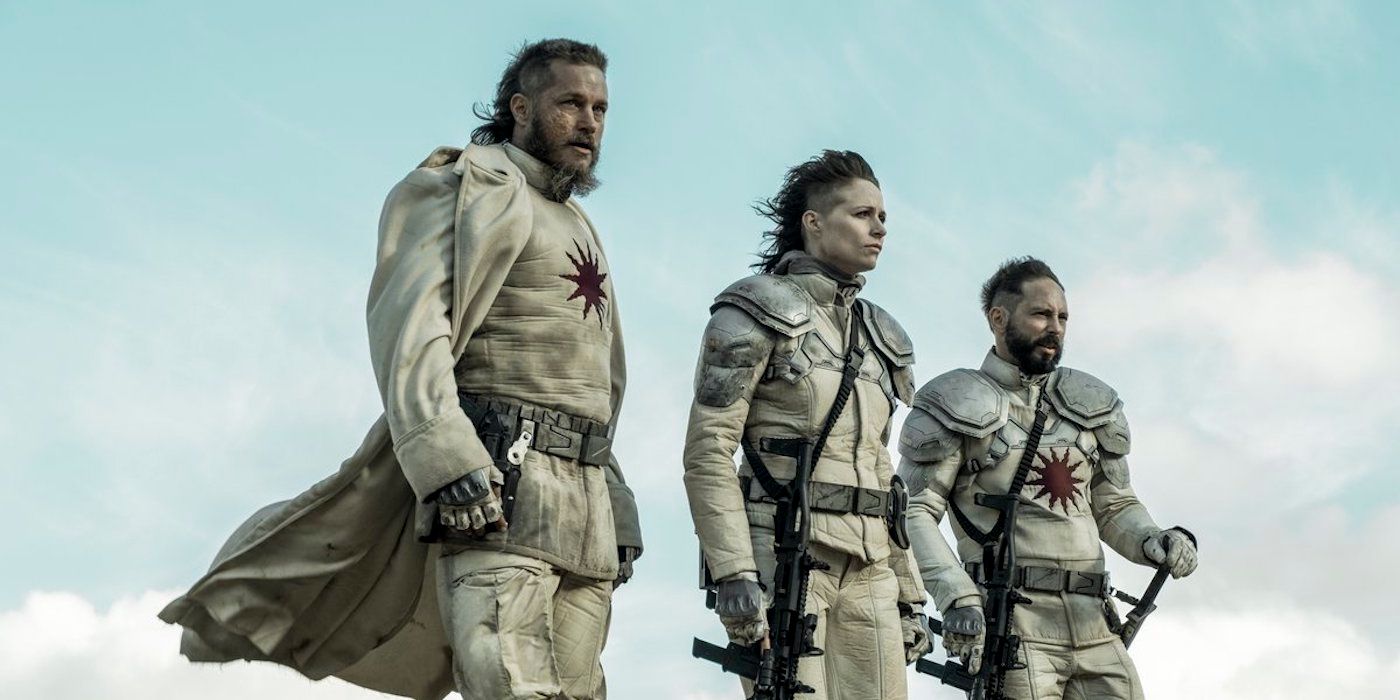 The Christians seemingly were the victors in the war; however, the outcome was a Pyrrhic victory, due to the Earth becoming uninhabitable.  The remaining religious population boards a massive spacecraft called ‘The Ark’, and travels the universe searching for surviving humans who may have escaped to find a habitable home.  The group hopes to find other believers or convert survivors.  This is a major problem for Mother and Father, for they were programmed by atheists to raise humans to depend only on science and logic, rather than what atheists call fairy tales.  Regarding fairy tales, Mother believes that it is important to occasionally let one’s imagination run rampant, and she gives the children a poignant rendition of “The Three Little Pigs.”  Adding to the tension, Mother and Father later discover that Campion has been praying.

Elements of Alien, Blade Runner, Gladiator, and Kingdom of Heaven, are acutely apparent in “Raised by Wolves” and “Pentagram.”  The attire worn by the religious sect is modeled after the clothing that was worn during the Christian Crusades.   The violence and suspense are reminiscent of the science fiction horror classic Alien.  The handheld weapons and flying crafts are indicative of such gadgetry in Blade Runner.

Episode 1 of Raised by Wolves is currently streaming free on YouTube:

Episode 3: “Virtual Faith” is helmed by Ridley Scott’s son Luke Scott.  Luke’s dialogue scenes are similar to those of his father. But his action sequences are not as fluid. These scenes are more chaotic than intense. Yet, the most interesting aspect of Mother is revealed:  She was programmed by atheists to be a Necromancer.  A Necromancer is a powerful android that is nearly impervious to other weaponry and is able to release supersonic shrieks that shred enemies into innumerable pieces.   When a Christian group arrives from ‘The Ark’, the confrontation leads to the destruction of the ark, and Mother and Father taking care of surviving teenager, although it is implied that others have also survived.  These teenagers are frustrated with a conflicted Campion, as he struggles to reconcile logic from faith. Mother and Father defend the camp against smaller versions of the creatures that bored the giant hole seen in the pilot episode.  The teenagers are slowly beginning to trust their synthetic protectors, as their prayers alone cannot keep them safe.  Yet, the series maintains an agnostic balance, keeping the scales balanced between the faith and science influence.

Mystery 2:  It is unknown how other religious groups fit into these conflicts.  Are they neutral?  Do they side with the Christians, or are they mutual enemies of both groups?   The series has an intriguing third mystery:  Who are Sue and Marcus, and why have these atheists stolen the Christian Mary and Caleb’s identities, only to practice Christianity?  Are Mother and Father the best guardian for the children, particularly Campion?  The track record of Ridley Scott suggests that some of these questions will be answered, while some will be intentionally up to the viewer to interpret.

What is your take on the first three episodes of this series? Let us know in the comments below.