Although The Sopranos is considered to be HBO’s first hit series, the premium cable network was long known for its comedies.  Foregoing the troupes of traditional network sitcoms, series such as Dream On, Arliss, and The Larry Sanders Show defined HBO as a curator of sublime programming.  HBOMAX is methodically churning out it’s original programming, and one of its comedy entries is Love Life – this streamer’s first hit series.

While breaking down this series, it must be said that the paragraphs will be brief, much like the format of the show. Although 30 minutes in length like most television comedies, the pace of the series is almost like a webisode vs an episode. This is not a negative criticism, for the performances and the unpretentious yet ludicrous nature of the show is quite enjoyable. Love Life does not break new ground like the aforementioned HBO comedy classics. Yet, it is a decent entry in the HBO family library.

Engaging opening narration from a faceless entity introduces us to Darby Carter, played by Anna Kendrick. Darby, an assistant at an NYC auction house, is immediately likable and appropriately quirky. Although set in NYC, the world is not a carbon copy of the popular and rambunctious Sex and the City.  Nor is it quite as cynical as the other Big Apple-based series Girls. Love Life is very much a story that voices the escapades of millennials seeking true love, yet not having the life experiences to maintain that true love. Episodes 1-3 introduces the viewer to three of Darby’s love interests. The first relationship (Augie, played by Jin Ha; pictured) ends at no fault of Darby’s, her companion simply decided that his career is more important than their relationship and takes a job overseas. Seeking to fill the void, Darby has a one night stand with a random guy she met at a rooftop party. The young man attempts to remain in touch with Darby, however, she tells a sad yet hilarious lie that she is suddenly moving to Cleveland. The third doomed relationship is with an older gentleman. The relationship becomes serious but at the funeral recession of her new boyfriend’s father, she realizes that she does not have the life experiences to console and give appropriate advice to someone from an older generation.

Three years transpire between episodes 1-3.  This series is extraordinarily fast-paced but does not skim on character development.

One love interest is prominent in episodes 3-6, a gentleman named Magnus, played by Nick Thune (pictured). Magnus is a waiter at a lauded Manhattan restaurant and simply adores our lead character. The trouble with this relationship is not due to Darby’s inexperience or hasty decision making. Magnus is fired from his job, and it is highly suggested that the termination was appropriate. Nevertheless, Magnus futilely attempts to bring up a wrongful termination case against his former employer. Darby attempts to help and brings in a lawyer to assess the chances of having a strong case. The lawyer infuriates Magnus with the news that he does not have a case. 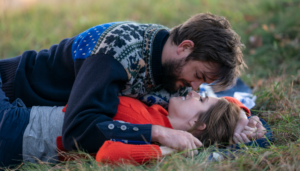 The genius of episodes 5-6 is that we are introduced to a keystone character named Luke in flashback sequences. Luke is a conduit into Darby’s adolescence, allowing the audience to see Darby’s troubled relationship with her mother. For Luke was the first person to notice the negative effects Darby’s mother has caused. Luke was Darby’s high school crush. Unbeknownst to Magnus, Luke is the lawyer that first attempted to help with the futile wrongful termination case. Darby and mutual friends of the couple discover that Magnus is tens of thousands of dollars in credit card debt. Furthermore, Magnus is intimidated by Darby’s recent big work promotion. Yet, Magnus manages to have Darby agree to be his wife. Episode 6 concludes with the inevitable – Darby divorces Magnus.

Darby has a medical scare and immediately inbound is her mother, Claudia.  With her appendix removed, Darby’s physical recovery has a strong prognosis, however, her mental being is an entirely different scenario. Our narrator discloses Darby and Claudia were not planned pregnancies, and their mothers were ill-prepared for parenthood.  Claudia’s parenting is very invasive and outright controlling, and at times is quite annoying. However, in one scene of comedic genius, Darby is forced up from the toilet so her mother can use the restroom after her mother grows impatient waiting on Darby to tend to the call of nature. Claudia later takes time for herself to explore NYC and has a panic attack from the overwhelming surroundings. This simple scene is a metaphor for people not being as confident as they appear. 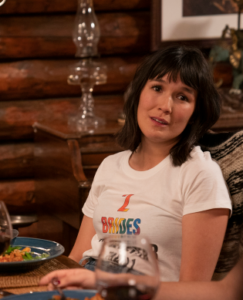 Augie returns in Darby’s life, and the two rekindle their brief but strong relationship. Darby’s best friend Sara ( Zoë Chao; pictured) is having issues maintaining any relationship. Sara was dumped by her boyfriend after a disagreement over whether or not to sell or live in his deceased aunt’s home. Sara loses her job and spirals near the point of no return. After a drug-induced night out leads to larceny, Darby gives Sara an ultimatum: Go to rehab or they are no longer friends. Sara seemingly agrees, however feigns forgetfulness of the promise the next morning.  Love Life intentionally skims over particulars and introduces us to Sara at her happiest, her wedding day.  The series is superb at showing the cyclic nature of human life: We are up one minute and down the next.

The penultimate episode and finale cover Darby’s pregnancy and finding her true soul mate. The former event is the gift from the breakup with Augie and the latter happens at Sara’s wedding.  Love Life will either entice or detract viewers with its breezy set-up and execution.  Although the show will not put HBOMAX originals on par with HBO originals,  I appreciate the entertaining characters and not entering the pretentious territory. Love Life never pretends to be a Curb Your Enthusiasm or Veep, but is still more impactful than other shows stuffed on streaming platforms. 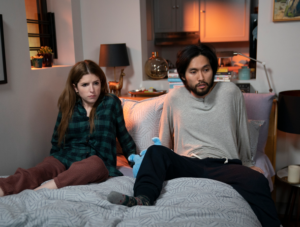 Love Life is worth setting aside time for its half-hour runtime.  I imagine that most HBO loyalists are waiting for more profound series that justify why our beloved brand was shoehorned into a CINEMAX-HBO buzzword. I am certain that Dune: The Sisterhood, Raised by Wolves and other series will make a more memorable debut. But for now, Love Life is a decent entry into HBOMAX’s current line-up.