This is the first of three posts that have been created by a guest writer for HBOWatch. If what’s offered is seen favorably then CAROLINE FUGER will soon be a permanent writer for the site. Good luck, Caroline! 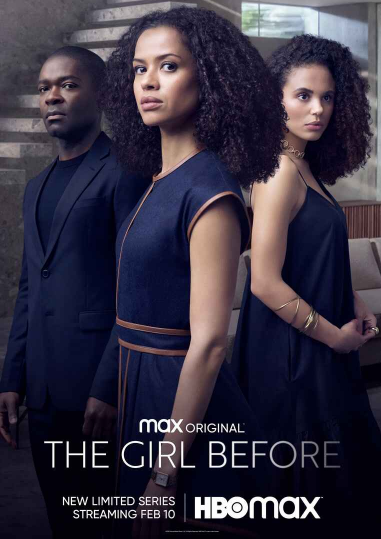 The Girl Before is a four-episode BBC production based on the 2016 book of the same name by author JP Delaney. The show is produced by author JP Delaney, Eleanor Moran, Rory Aitken, Ben Pugh, Ben Irving, Lisa Bruhlmann, and Rhonda Smith. It stars David Oyelowo, Jessica Plummer, and Gugu Mbatha-Raw.

The Girl Before is about an architect/landlord Edward Monkford (David Oyelowo) who has built a modern house in London and has provided a set of strict rules the tenants must follow. He will only rent to the people that he knows will follow his rules. Before choosing new tenants, Edward has them complete an extreme questionnaire and makes them agree to his rules: only bring a few personal belongings that will fit in one small closet, no children, no books, no rugs, and no mess, ever. The series simultaneously weaves two stories separated by three years and follows the lives of both the tenants, Emma (Jessica Plummer) and Jane (Gugu Mbatha-Raw) who both mysteriously look alike. Is this a coincidence?

The house, located at One Folgate Street is almost a character itself. The house is a minimalist dream, modern and stark with an open staircase and courtyard with a single tree. The house is equipped with a tech system, named Housekeeper. Housekeeper functions as a security system, plays music to suit the mood and displays frequent UX questions which provides Edward with even more information about his tenants. During the initial tours of the house, it is revealed that Edward had planned to live in the house with his wife and child, but the deaths of his family changed his plans.

Emma and Jane have recently suffered traumas. Emma wants to move to the new house because she was recently robbed at her old house. Jane has experienced the pain of the stillbirth of her daughter and is looking for a new beginning. Emma moves into the house first with her boyfriend Simon. It quickly becomes apparent that Emma and Simon aren’t following the rules, when they have a party. The police come to the house to talk to Emma about the home invasion and reveal that she was sexually assaulted, something Simon knew nothing about. At first, he is a supportive boyfriend, but by the end of episode, Emma breaks up with Simon.

Three years later, after the house has been vacant and Jane moves in, she discovers flowers left by the front door. Jane invites some close friends over for a quiet night, but is interrupted when flowers are again delivered to the house. She rushes out to catch the delivery man, who is revealed to be Simon. He tells her the flowers are intended for Emma, the woman who lived in the house before her who died at One Folgate Street.

Both Emma and Jane begin a relationship with Edward, three years apart. He shows a romantic side by taking both women to places that are meaningful to him, buying them expensive gifts, and offering to cook dinner, but it is creepy as he courts them both in the exact same manner and makes the viewers question if his intentions with both Emma and Jane are pure, or what exactly is he doing? Emma visits her therapist and tells her the truth about being sexually assaulted. Jane is exploring the house more by attempting to find out more information about Emma. Jane becomes even more suspicious of Edward after being awoken by a strange noise and finds a hidden technology room off of the bedroom. She discovers what she believes to be Emma’s belongings and finds a card with the name and number of Emma’s therapist. As she leaves the room, she notices Emma’s writing on the wall that reads “Help Me.” Jane visits Emma’s therapist and when Jane reveals that she has been seeing Edward, the therapist warns her that she is in danger.

As episode two explores the similarities between Emma and Jane, episode three starts exploring the differences between the two by putting the characters in danger and having to face their truth. Emma’s character is forced to face her truth of her recent trauma when the police discover the truth about her rape and charge her with perjury. Emma begins to unravel as a resultof this discovery.

Jane discovers she is pregnant with Edward’s child which forces Jane to explore her recent trauma of losing her daughter. For the sake of her new baby, Jane is forced to find out why her daughter died. She obsessively looks at her charts and makes an appointment with her team of doctors. Her doctors tell her she didn’t do anything wrong, that these things just happen. For the sake of her new pregnancy and new baby, Jane starts to uncover more about Emma’s relationship with Edward. Jane becomes more obsessed with solving the death of Emma and begins to interview Emma’s friends and colleagues. They aren’t able to provide her with a lot of details, but they all suggest that Edward’s aloofness was unnerving.

Edward breaks up with Emma and tells her to move out of the house by the end of the week as he thought she was a different person. Rattled and scared, Emma calls her ex-boyfriend Simon for help and comfort. Simon agrees to watch over the house and protect Emma from Edward. Jane is still on her quest to find out more about Edward and Emma’s death. She talks with the police, acquaintances of Emma, and even Emma’s ex-boyfriend Simon. Simon listens to Jane’s worries and advises her that Edward seems to have a pattern with his relationships. She confronts Edward about the night that Emma died and asks if there is any video evidence from that night. He says the video cameras were not working on the night of her death. This leads Janet to think that someone who knew the house and the security system tampered with the system so that there would be no evidence. By the end of the episode Jane puts the pieces of the puzzle together and discovers the difference between Emma and herself.

The Girl Before is a psychological thriller, but with so few characters it really is much more interesting as a character study. The show’s casting is outstanding as all three actresses resemble each other (Elizabeth, Edward’s dead wife, & Emma and Jane), while at the same time bringing their own unique personalities and style to their characters. Although when it was finally revealed how Emma died, it was still a bit of a surprise so it did have a twist. Even more surprising was why would anyone agree to live in Edward’s masterpiece of a house with all its rules, even with a more than reasonable rent? Both Emma and Jane agree and since they have both recently suffered traumas it might make sense that they crave order and structure. When they both pursue a relationship with Edward, one has to wonder what were they thinking? To be fair, they don’t know all that the viewers know, like how he takes them to the same place, says the same things, buys them the same dress and necklace, and is basically a controlling creep, and yet, we wonder if he is as bad as he seems. After all, he is going through a trauma too. In the end,Emma meets with a tragic end, Edward is still stuck in his past and his perverse relationship with his house, and Jane, through the help of the other women, finds her way out of the house and finds herself a new beginning.

Find The Girl Before to stream exclusively on HBO Max.