The bus is hitting L.A. as Deborah (Jean Smart) wants to visit one of her properties she’s been trying to sell. The neighbors built a treehouse so now she has no view. I can understand how that would hurt the selling, but also it sounds like you’re not willing to negotiate on price, Deb. So this is also at least a little on you. Ava (Hannah Einbinder) makes a return to her condo and visits a sub-letter. Well, she wants the tax returns from the garage but why not say hi. She also bumps into an old friend and offers apologies for past wrongdoings. Honestly, I actually see some growth in Ava, which is quite refreshing.

Jimmy (Paul W. Downs) is being considered for removal from Deb. Now that she’s pivoted to wanting to do her own special, she needs a network on board. Sadly for her, their offers are pitiful or nonexistent. The way the whole office scene went down was not surprising and I’m proud of Jimmy for stepping up. He’s on his own now, but not completely alone. Kayla (Megan Stalter) just kills me every time. But in actuality, it’s not a great look for the company and she’s offering her trust fund. Deb handles the network news with a chainsaw.

Ava has not only made amends with a friend, she happens to get herself some action. Man alive, what an awkward morning after. Oh Ava, why do you always look tired in your sleep? I feel like this has got to be me. She makes it to her friend’s party and oh who else is there? Her ex, Ruby (Lorenza Izzo) is there as well and aren’t they giggly with each other. But wouldn’t you know it, as soon as all the stars align everything blows to shit. 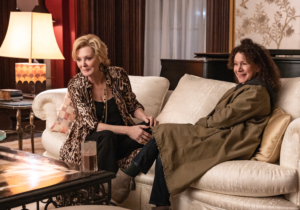 Next is some auction action and of course Deb’s there to be miserly to Marty (Christopher). His new fiancé wanted the painting instead of a ring. My, how elitist of you. A diamond? No, a Kandinsky. And it could have been all yours, Deb. If you had only tried. She wants to change how she went out and that means the Palmetto. One night return for her filming and she’s out. Of course, he’ll give it to her. And as much as she might want to deny it, all she really needed to do was ask and it would have been hers. 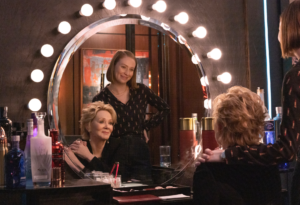 Meanwhile, Jimmy is trying to maintain clients while Janet Stone (Ming-Na Wen) attacks the list. I wonder who she’ll meet in the V’s… Then Ava’s also gotten a new gig from her old friend. Well, she wants Deb’s permission first which of course she gets. She’s helping with some joke writing and nailing it. But wouldn’t you know who comes back for the taping? Quitting a week long job before the week is done seems not the best choice. Could you at least try to fly back?

But the filming has arrived and it’s time to get serious. Serious as a heart attack apparently. Well, they never confirmed, I just assume. Quite the save from Jimmy though and really proves the mindset he has for his clients. He wants Deb to succeed and thanks to Janet Stone’s visit, they know exactly where to market Deb’s special: her QVC work. Wouldn’t you know? It’s the sweet spot. Deb’s soaring and making some big decisions. Even if Ava wore that dress. The reality is she’s trying to give Ava a career. Even if it’s heart breaking and stupid and I cried all over the place. I couldn’t handle Ava’s “Please don’t make me do math right now” comment. Nothing confirmed but we can hope for a season three and more Deb and Ava antics. Following two funny women seems a worthwhile use of time to me, even if I’ll never make it in comedy.