Episode 1: “There Will be Blood”

I couldn’t wait for this show to return, particularly because of Jean Smart’s acerbic wit as Deborah Vance but also the insane charisma between her and Ava (Hannah Einbinder). Tension is the name of the game starting season two however, as Ava awaits news of the email. Them both hitting their phones the minute the plane landed was hysterical. Ava’s doing everything she can to quash the email but it’s no surprise she’s on edge. Deb however is ecstatic to be working on new programming and wants to get started right away. Poor Ava needing to be attached to her hip.

Then there’s poor Jimmy (Paul W. Downs) stuck back in L.A. and stuck with the insane Kayla (Megan Stalter). He just needs a moment’s peace and with her around he’ll never have it. I doubt anger management is the answer, but do you, Jim. She’s coo-coo for Cocoa Puffs so I wish you the best. I doubt this will end here, though the HR lady did try to help you out. Bless, she was hilarious.

But the reality for Ava is she really cooked her goose with this email. The whole Christmas room scene had me in stitches. She’s trying to get this thing killed and yet cannot help but continue to say dumb shit. Ava gets the last of her things from the hotel and I hope Ray (Joe Mande) comes around again at some point. His comedic delivery is unparalleled but also one of the people to call Ava out on shit to her face in a delightful way.

Deb’s focus on her act meets a bump in the road when her daughter DJ (Kaitlin Olson) shows up. DJ wants a family with her new husband Aiden (Paul Felder). I love that he’s a UFC fighter, but especially his needing Deb’s approval. The whole Midwest thing killed me because I’m a Midwesterner and it is a whole thing. But Deb does show for fight night and ends up being the motivation Aiden needs to get it done. Deb’s sick of seeing the future she was supposed to have dangling in front of her face. Unsurprising that she’s the get even type. Motivational speech? Unexpected, yet delightful. Paintball gun? Not surprised in the least. 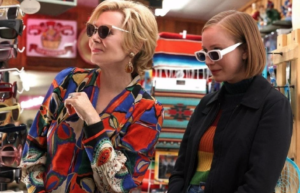 The duo hit the road and it’s clear Deb finds the road a delightful place to be. She’s simply joyful being on her own, doing as she pleases. But Ava is still on edge and working to get the email killed. She’s finding it harder and harder to be around Deb knowing the approaching shitstorm. Jimmy’s hustling back in L.A. to get it killed, lining up a meeting with Janet Stone (Ming-na Wen), who is a big Hollywood hot shot. And yet, in true Hacks fashion, Jimmy screws the pooch spectacularly and now has to go suck up to the Boss Man. Have we mentioned who his daughter is? One guess. But Jimmy does what he needs to do and sucks it up. Way to take one for the team, Jimmy. Sorry it’s a gonna be a moot point.

Deb takes Ava to see her psychic. The trading conversation had me cracking up, but also Deb’s investing advice isn’t entirely bad. Honestly, it’s decent common sense. Have your hands in all the pots. Smart. She’s got enough wealth to spread it around to invest in everything and can pull out if it’s getting rough. Look at me learning how to try and be wealthy! But the visit gets to Ava and she ends up spilling the beans anyway. Does it complicate things? Sure. Is it better to be a honest person? Umm, yeah. I’d say so. Deb’s mad but she’ll come around. I mean, she’s gonna make it awkward and painful as hell first but I foresee you guys coming out this okay. Well, I suppose we’ll have to make it through litigation first. 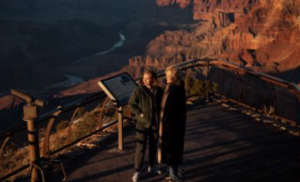 The tour bus arrives and Jesus, it’s nicer than my house. Probably better square footage too. But it’s the tour manager Weed (Laurie Metcalf) that was the real scene stealer. Lawd, I could not stop laughing. It felt like she had every good line in those opening scenes. What brilliant casting, honestly. I grew up watching Rosanne, but damn, she’s prime time now. Deb is making things just absolutely miserable for Ava. Unsurprising, it does rather seem her M.O. to punish those who have wronged her. Of course, not much was said about how true it all is and what that actually means about Deb, but I’d imagine she’ll have some self-reflection at some point this season. She’s downright miserly at the yard sale, especially knowing the real value and it made me mad. Perhaps, you need to be taken down a notch or two, dear.

Marcus (Carl Clemons-Hopkins) is holding things down at home. Or is he? Post-break-up, he’s not doing great. Seems like he’s struggling to find his center again. We need more Miss Loretta (Luenell) scenes, please and thank you. I love when she drops in with his momma (Angela Elayne Gibbs). Marcus has a sweet moment with Josefina (Rose Abdoo) and it was nice seeing their dynamic outside of Deb. You’re always different when the boss isn’t around. It’s just true. But it offers some perspective for him and his new furry companion is just adorable.

But the kicker of the episode is seeing everyone rally to find the missing tennis ball cannister. The moment Ava realized it was gone I started crying. I can’t imagine that fear and panic. Only to discover it’s been thrown away? I would be raging in that bus. But seeing Deb’s shift, as I hoped she would, was inspiring. Litigation might still be ahead but she’s not as cruel as she really seems. Crazy, yes absolutely, but not downright evilly cruel. Ray comes back around and offers some much needed perspective for Ava. What a perfect way to honor him. 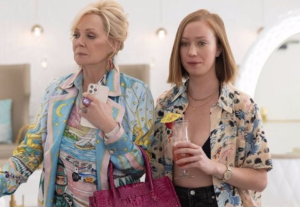 Deb’s still hustling on the road, prepping QVC pitches outside. Admittedly, the lighting was pretty damn good. She’s gotta make sure she keeps checks rolling in. But she’s prepping for a cruise that Marcus booked. Remember how he was super on top of things? Well, turns out his partying new lifestyle leaves some room for improvement. Gay cruise? Well, in a manner of speaking, just not what she had in mind. Look, you got to see Margaret Cho, I’d say that’s acceptable if not an actual win. Ava’s still trying to stay on the straight and narrow which could be hard in international waters with a bunch of gorgeous women. Look, I’d get distracted too, Ava.

In fact, Ava and Deb’s entire conversation about sexuality was quite refreshing. Examining your attraction and what it means to you is a new concept to some. I personally felt very validated by the conversation being LGBTQ identifying myself but couldn’t help giggling over the Kinsey scale reference. But Deb’s willing to try and she has an absolutely bomb time singing. She’s won them over and feeling good about being there even if it was Marcus’s mistake. But that good feeling goes away quickly when she steps over herself. It’s hard to get away from old biases and she’s not particularly great at biting her tongue anyway. Nor reading the room either. Dinghy for two?

Then there’s Marcus who is clearly trying to prove something to himself about what kind of person he is. I was really excited when he got the puppy because I thought we’d see him spending time with the dog maybe at a park or something. I figured that would open him up to a new dating experience. And it still might, but to see it go this way was so heart breaking. I was fully prepared to turn it off if anything happened to that sweet baby. Look, I get it’s fake but even then I cannot stand the thought of animals in pain. And that teeny, tiny little nugget especially. I hope this is the wake-up call he needs. I don’t know what will happen to Joe but it’s probably best that Marcus be around work right now because I don’t think he can handle being by himself.