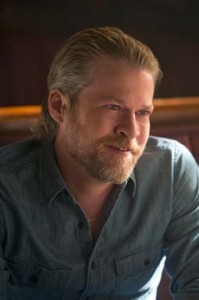 We at HBOWatch owe you, the fans, an apology. As you know, one of Bon Temps most loved residents passed away this season. We were so shocked that we forgot to write about it. Let me fix it for you.

Terry started off as a minor background character, but grew into a role as one of Bon Temps’ fan favorites as the quirky marine with a big heart. I’m going to really miss Terry, moments of weird and all. These are just a couple of my favorites, and a wrap up of Terry’s last hours in season 6, episode 6, Don’t You Feel Me.

This is probably my favorite Terry moment, and you may remember it, too. For just a little while, when Maryann was in town, you may remember things got a little chaotic. Under the spell, Terry emerged as a leader and a soldier. Who wouldn’t cheer Terry calling out the god without horns?

I love this clip showing the everyday Arlene and Terry.
Give me your tawngs…

Terry went all the way from living in his back yard to being an animal lover and a family man. Watch him tell Arlene why he’s great with kids.

Unfortunately, sometimes the past catches up with you, and Terry spent season 5 battling a fire demon and dealing with a fellow marine. He had to kill that marine in self-defense, and the guilt was too much for him. I hated the way it happened, especially the scene where Terry asks yet another soldier to kill him, and the soldier says yes. It’s a heartbreaker knowing that Terry is suffering so much that he doesn’t think of what it will do to the people he loves.

Terry is making his final preparations for his exit. The writers must have looked at some kind of list of suicide warnings on Wikipedia for this one. He gives a safe deposit box key to Lafayette (giving away personal items) and thanks him with a goodbye hug (saying goodbye to people is another one). I don’t know if Lafayette is a little loaded by what he may have stuffed in that blunt . Maybe he cruises WebMD in his spare time looking for symptoms of various diseases because he’s a hypochondriac and knows what’s up. Whatever the case, he is spooked, and he calls Arlene and tells her. Arlene and Holly hatch a plan to have a vampire glamour Terry into being happy again.

Gay Vampire Dad owes Holly a favor, and bops over to their place to talk to Terry. Is Holly living at the Bellefleurs, too? It’s like a bed and breakfast with all the people and supes coming and going. He zips to Terry at vampire speed and puts the marine veteran under to do his work. Arlene tells them what she wants Terry to forget, and it’s all over before we could think much about what’s happening. Arlene is snuggling in Terry’s lap while Holly and Gay Vampire Dad are chatting like it’s just all good.

A couple of points, if I may– judging from the dialogue, Gay Vampire Dad glamoured Terry because Holly picked his kids up from soccer practice. That seems like a whopper of a favor if you ask me, especially if you consider that he risked his life to get there with the vampire curfew in effect. Pshaw, he says, nobody ever pulls over a Camry! (I beg to differ.)

Given that they don’t seem to mind glamouring, and it seems to work so well, why haven’t any vampire glamouring businesses opened up in the True Blood world? There’s no overhead, and depending on how desperate humans were, they might pay anything to have a vampire fix them. Wipe away your anger, make your mental problems disappear overnight. Get glamoured and watch the pounds melt away. Want to learn French? See a vampire, get glamoured and get going. I just think this is a whole missed plot point and opportunity for young vampires looking to save for their next vacation or retirement.

Huh? Ehrm, folks, the editors are telling me to stop making memes and get back to the show. Sorry about that. Back at Merlotte’s later, Terry seems to be having a great day. Lafayette asks Arlene if everything is OK, and she says everything is going well. Terry takes the trash out, and stops for a brief chat with Big John (OK that’s where this guy came from. Whatever.). This sequence takes too long for someone taking out the trash, so you know it’s coming and all you can do is sit there and wait.

A shot is fired that gets everyone’s attention. The staff finds him out back. They try to stop Arlene from going to him, but she goes anyway. It’s just awful because he probably doesn’t even remember hiring that guy and everything was going his way. Arlene sings him a lullaby as he takes his last breath.

I think Terry’s story arc, death and funeral lasted way too long. I preferred him as a background character and not the way he was right before the end. But that brings up one thing we may have forgotten– that Terry died happy, all his anguish gone. Sookie will never undo his glamouring by mistake, and no vampire will ever do that to him either. To leave life with no regrets– that might be worth a mom’s $5 trick after all.

…and here’s a full Episode 6 Recap (if you can stand it):