Here is another instance of not a lot of news but just a key bit of information to keep fans happy. That tidbit here evidently is that a second season of GENTLEMAN JACK is back in production. As you may recall the series is a historical drama series created by Sally Wainwright and is set in Yorkshire, England in the 1830s. It stars Suranne Jones as landowner and industrialist Anne Lister and is based on the collected diaries of Lister, which contain over four million words and are written largely in secret code, documenting a lifetime of lesbian relationships. 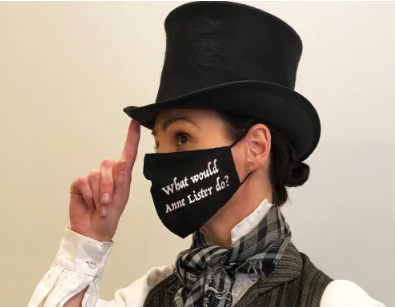 When last we saw Anne, those around her were setting up to get her married off to an eligible bachelor, though Ann Walker wishes to marry her. Had she any say in any of these plans? Well, production plans are moving forward to get viewers that answer and more as the cameras roll. The production, manned by Lookout Point, is taking place in Yorkshire, England, under local coronavirus safety protocols, with series regulars including Gemma Whelan, Gemma Jones and Timothy West returning. Joanna Scanlan (SALLY4EVER episode and Getting On) will join Season 2 in the role of Lister’s outrageous former lover Isabella ‘Tib’ Norcliffe.

The headmistress of it all, Sally Wainwright, stated, “I’ve been in a little bit of heaven once again spending so much time deep in Anne’s diaries as I’ve written the scripts, and can’t wait to see the fabulous, joyous magic and detail that Suranne and Sophie will bring to it all.”

Could the sophomore season get to us by late 2021? As the pandemic surges it is hard to know just when content will make it to the screen but, we can be assured, by the very picture above, that Suranne Jones is taking all precautions. Look for GENTLEMAN JACK returning to HBO.