From Variety comes the news that GENTLEMAN JACK has been renewed for another season. The first one is just about to wrap up on MONDAY, JUNE 10. As we leave the season, we will see that Anne Lister (Suranne Jones) has fled Shibden Hall for a trip around Europe to forget some of the stresses she faced at home. I a bit of a spoiler on the last episode about to air here as I say that that holiday is short-lived as word gets to Anne that her attentions are indeed needed back 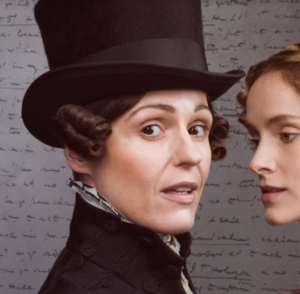 home. So much for getting away, but what is the emergency? Is it continued problems with the coal mining operation she owns or something of a more personal nature?

We will have to wait for Season Two for that bit of news but at least we know there is one and Jones is delighted. She states, “We always dreamed there would be more and now we get to play it all out. It’s such amazing and positive news. I love working with the brilliant and talented Sophie Rundle and can’t wait to create some more Lister and Walker moments with her too.” Rundle plays the lesbian lover Ann Walker in the piece. The story, over a total of eight episodes, examines Lister’s relationships with her family, servants, tenants and industrial rivals and, most importantly, would-be wife. Based in historical fact, the real-life Anne Lister’s story was recorded in the four million words of her diaries, and the most intimate details of her life, once hidden in a secret code, have been decoded and revealed for the series.

If you haven’t been watching GENTLEMAN JACK it is never too late to catch up as the series is present on HBO Now/Go, HBO On Demand and across the channels. You have until sometime in 2020 to catch up in time for the sophomore season of this BBC/HBO co-production.