Washington (Joe Armstrong) is carrying out the notices, bringing him to the Priestley family door. Mrs. Priestley (Amelia Bullmore) is bit frustrated about the status of her day school and Sunday school. That’s fair, but really there shouldn’t be too much worry about Miss Walker (Sophie Rundle) not keeping it up. Just because she’s bringing accounts into where they are supposed to be for the requested division doesn’t mean she would abandon children’s education. She’s not sinister, she’s just a woman taking charge of her affairs. But the environment for conversation was tense and after all, let’s remember he’s only the messenger. Though given the past with the Priestley family, this does seem rather a fuck around and find out type situation.

Lister (Suranne Jones) is focused on her new business venture opening the inn and casino. She wants Walker to lay the first stone as well as give a little speech. It will be a cute moment but Walker is in a mood. First, accosted while out shopping for doing nothing wrong in managing her affairs. Then she’s catching on to rather a lot of her money being spent by wifey. Ann feels rather like a pocketbook and not a wife. Then there’s also the issue of the Captain (Derek Riddell) who continues using his wife (Katherine Kelly) as an excuse to not yet come handle the matter. Though arrival is soon, he’s continuing his conniving and manipulative manner but I’m in an annoyed mood overall right now with the country so this is where my annoyance is landing. 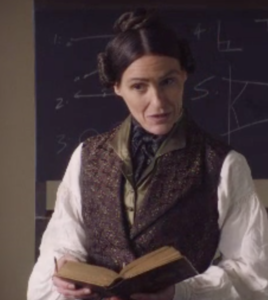 Meanwhile, Washington enlists both Ann and Anne to assist with the Sunday school given it’s now under their charge. Washington and Walker have similar experiences with bored children. Lister has more success keeping the children enraptured in tales of math. Washington’s daughter Hannah (Rosina Carbone) spills to a classmate witnessing the married women. We’ll see if anything comes from that in the future. But also for Lister, she catches her staff in the act and I knew it had to be coming. Given how many people have caught them thus far. 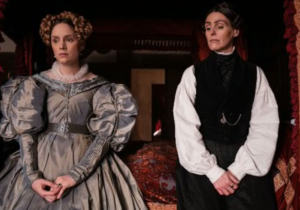 Gearing up to conclude the season, Walker is still in a mood. Her wife refuses to let her meet her friends. In this case, I get both sides. Lister doesn’t want Walker to get overwhelmed. That’s valid. Walker has had quite the roller coaster since we met her and it makes sense to me that Lister would be concerned. But you’ve got to give her something. Especially after your own conduct with a certain someone. Which she clearly has caught onto not to mention all the money of hers that you’re spending. Or maybe this is just it? Maybe it’s time to move on? They go see a monument at Lister’s request. A little girl who died which provides a few meanings for Lister. Is this the child she could have been or the child she’ll never have herself?

The Captain and Elizabeth arrive though everything seems rather stiff, though in part that could be Ann’s hangover. He’s of course out to prove Lister is a predator out to steal Ann’s fortune. In some ways, I don’t necessarily disagree considering how much of Ann’s money she’s spending right now. But I disagree with her being a predator. He tries to get the lawyers on his side and it’s clear that won’t work either. In fact, given everything Mr. Gray had to say regarding the matter I think it’s more likely you’ll end up being sued yourself if you don’t get your shit together. Refusing to sign the papers at this point is just juvenile and petty, though Lister makes quick work of that. Elizabeth eventually spills the beans and given the snake has finally been made out, progress can be had and he signs the papers. The estate is officially separate and Walker is ready to move forward with the wills. Doubts are natural but she’s becoming better at trusting herself and her path and that means with Anne. Who herself receives some painful news.

Marian (Gemma Whelan) finally opens up to Anne. She’s not happy at Shibden and the mock marriage announcement has scared away Mr. Abbott (John Hollingworth) for good. If anything I would have expected Lister’s word to be the end of it, but regardless it’s over. She wishes Anne the best, but this isn’t the place for her anymore. The show has yet to be confirmed for another season. I hope this is not the end. I would like to get a bit more of a glimpse of their married life. The real couple had a few years together before Anne Lister passed. I’m sure we could get one or two more seasons for married shenanigans. Ann Lister seems quite the mischievous type so I’m sure her diary could reveal more content for us. But for now we can celebrate seeing more LGBTQA+ representation in media and especially one with important historical roots.