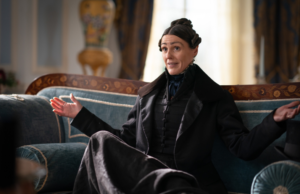 HBO has different ways of letting us know that shows are in the pipeline. Evidently, Season Two of GENTLEMAN JACK must be on the docket and so information on the season will start to trickle in. However, it is not ready to reveal too much. We are not getting a trailer, poster or interview just yet. All we get is a few photographs to tide us over. We’ll take what we can get. 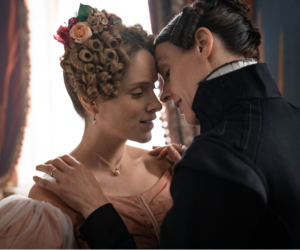 We haven’t mentioned this work in a long while. If you recall the story is about Anne Lister. Returning after years of exotic travel and social climbing, Anne determines to transform the fate of her faded ancestral home, Shibden Hall, in Halifax. To do this, she must re-open her coal mines and marry well. But the charismatic, single-minded, swashbuckling Anne Lister – who walked like a man, dressed head-to-foot in black, and charmed her way into high society – has no intention of marrying a man. True to her own nature, she plans to marry a woman. HBO Watch looked at what transpired in Season One here. A second season was announced in June of 2019 and it got before cameras in November of 2020.

It seems we shall see the sophomore season in early 2022. It all leads us to ask what else is there for Anne Lister (Suranne Jones)? We have already seen her create a unique relationship with Ann Walker (Sophie Rundle) who she had all plans to court. The relationship proved delicate as it did novel. She was even forced to fight off a suitor or two. To add to her woes, the financial state of her estate was dismal. So, would they see it through or wouldn’t they, keeping in mind the society of the day?

The photos we add here from Season Two are not very telling of what is to come, but they should help us sense the dramatic and romantic flair that will flourish when GENTLEMAN JACK returns.