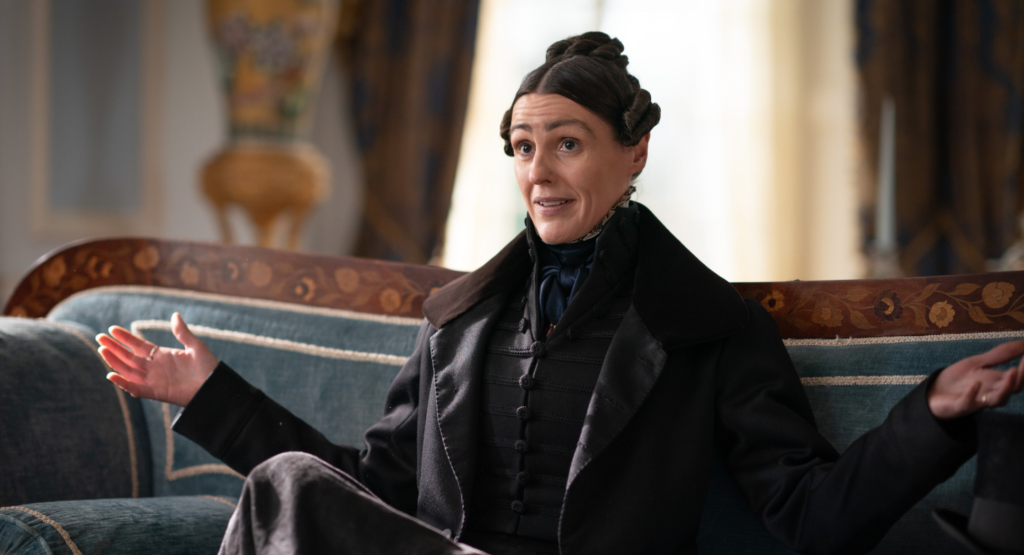 We welcome this second season and the secretly married Anne Lister (Suranne Jones) and Ann Walker (Sophie Rundle). After the painful events of last season and the tender reuniting of the two, Lister made sure Walker would be in good care and in a spot she can recover her good health. Namely, far away from her family. She’s making the rounds assuring everyone, but of course no one is much assured. In fact, they’re basically mooing around wondering where their cash cow went. But also Walker will soon be taking up residence at Shibden and that’s quite a pill to swallow for Walker’s family. The Lister family is quite thrilled. 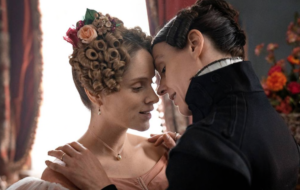 Meanwhile, Lister herself is preoccupied with land matters. Acquisition of more, but also the now changing landscape of water canals versus new railways. If you’re on this side of the timeline, you have an idea which technology wins out. Back then however, it’s a race to protect your shares. But overall, Lister’s main focus is her new wife and safeguarding their life together. Once wills are arranged, they’ll have a place in each other’s families should anything happen. It’s a tad easier for Lister. Walker is the one hounded by relatives for money and will need her sister to separate the estate. But there is also a future Paris trip to look forward to and Walker doesn’t seem in nearly as much of a rush as Lister to push the division. But they do socialize with friends of Lister, the Norcliffe family, who know her taste in company and it’s nice to see people being less snooty about the LGBTQA lifestyle. Pssst, did you know LGBTQA people have always existed? Shocking, I know. But here’s a whole show that’s proof. Because it’s based on a real woman. And I love it.

But back to Lister, she’s got quite a lot on her plate besides her new wife. Christopher Rawson (Vincent Franklin) is still stealing her coal and she’s working on mitigating that. Father Sowden of the pig owning Sowdens is still missing. Remember what happened to him? Well, she ain’t gonna find him. And Marian (Gemma Whelan) seems to be coughing an awful lot. Is that something we ought to be concerned about? Well, according to the science wielding Lister, no. But also she’s spending quite a lot of money lately and let’s make sure the coffers don’t run dry making your new wifey comfortable, eh? Walker assures her to keep the faith, but if someone is not looking towards the future with you how long could the relationship last? 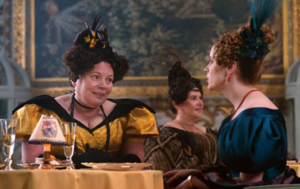 Lister is determined to keep Walker busy and they finally make it to Paris and catch up with Tib (Joanna Scanlen) or Isabella Norcliffe, an old friend with the same penchant for companionship. She’s much more ostentatious than Lister and far more obvious, I immediately loved her. But she proves the title, two jacks don’t suit. Tib cautions Lister in regards to Mariana (Lydia Leonard). And she takes it under advisement, but first the Alps!

Once back from their journey, Walker agrees to write about the division and does so, showing she really is in this. But the Walker clan is still conniving so it’s important to act. Her sister Elizabeth (Katherine Kelly) doesn’t mind, though her husband (Derek Riddell) doesn’t necessarily see the rush. But he does realize the rest of the family are vultures over the unmarried woman with wealth. 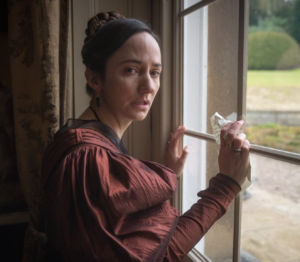 Lister eventually opens up about Mariana and her letters and I was super proud of her. She wants to be open and it’s clear Mariana was a sore spot. Particularly given Mariana’s circumstances, it’s not surprising there’s been some emotional turmoil there. And even more particularly, after however many years of Lister begging her to leave and be with her at Shibden, Lister has now moved on and Mariana finds this the time to be petty. She won’t visit them at Shibden and Lister’s “little friend.” Come now, Mariana. No need to be so insipid, you shall reveal your true colors.

Speaking of revealing true colors, Uncle Sowden (Anthony Flanagan) has a little thing going with Momma Sowden (Lucy Black) and blackmails his nephew Thomas (Tom Lewis) about it. Thomas’s new bride, Suzannah (Amy James-Kelly) tells her mother what it’s like there and the lewd comments Uncle has made. Her father, Washington (Joe Armstrong), is concerned and investigates himself. Seems Thomas isn’t as kind as he might seem. But I suppose trouble does seem to keep leaving their house. Or does it?