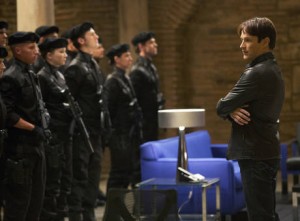 That just happened. At the end of True Blood’s season finale Sunday night, Bill Compton, born-again follower of the vampire god Lilith, takes his newfound spirituality to an extreme: He drinks all the remaining blood left of his prophet, and then, in an über-violent display, he starts convulsing, blood begins spurting out of his eyes and mouth, and he explodes—as vampires typically do when they die. What they don’t typically do, though, is re-emerge out of their own (and Lilith’s) blood. Bill, like the deity before him, is nude and adorned in gore—and he has one hell of a growl. He, apparently, is no longer just Bill Compton, demagogue. He—It—is some odd combo of Bill and Lilith, a demigod. 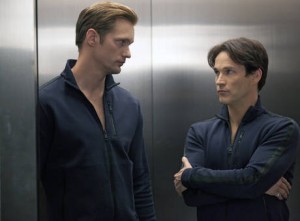 Bravo, writers of True Blood, in all seriousness. Your latest move was jaw-dropping. It was symbolically rich, too; for me, at least, Bill’s transformation says a lot about religious fundamentalism gone wrong.

The vampire’s religious fanaticism this season has evolved from a light interest in Lilith’s teachings, to drug-addled awakening, to (apparently) literal rebirth as Lilith. We see this transformation crystalize at the very end of the episode, when Bill drinks the blood of Lilith—mirroring the Christian sacrament, the act of drinking the blood of Jesus Christ—and then dies—like Jesus dies (substitute a cross for exploding entrails)—only to be reborn, remade in the blood of Lilith, as Lilith—again, like some perversion of Jesus’ resurrection. 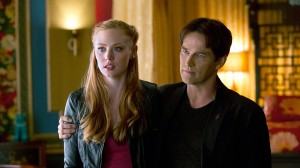 Yet again, True Blood lifts its fair share of allegorical weight. Whereas before the allegory was gay rights—remember “coming out of the coffin,” anybody?—now it’s religious fanaticism. True Blood highlights the thin line between devout worship and self-worship: When does worshipping your god end and becoming your own God begin? Bill doesn’t know anymore. The line between the two is about as thin as the puddle of blood he left on the floor.

I’m not trying to say that spirituality in general runs this risk of egocentrism. Only that a certain kind of spirituality does, as in Bill’s case: a desperate, overzealous religiosity. Pam makes this point clear. Of Mr. Compton’s wayward spirituality, she says, with a sardonic tone, “He’s always looking for something to feel guilty about.” She makes a pretty fair judgment here. Bill, good guy he used to be, has always been somewhat damaged, never satisfied with himself. And now his solution to self-loathing is self-worship. 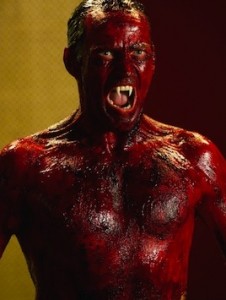 With Bill’s folly, this episode sharply critiques overzealous religiosity. Please excuse the preachiness here—no pun intended: If you have a spiritual hunger, don’t let it get the best of you. Be satisfied with what’s given you. Don’t binge on spiritual renewal to fill some gaping hole in yourself. Because if you seek total absolution, you will fail. Bill doesn’t know this yet, but I think he will soon—remember, when he drinks Lilith’s blood, there’s nothing left. The vessel is forever empty. There’s no blood to purify him again next Sunday, nothing to repeat this supposed-to-be-sacred ritual. Bill’s indelible spiritual appetite has teetered from devotion into full-fledged demigodery.

He was once a humble and kind vampire. Not so much anymore. His newfound religious radicalism—and cruelty—is a warning: Read the Word, don’t write it. Don’t become your own Jesus. And please, check your ego at the door.