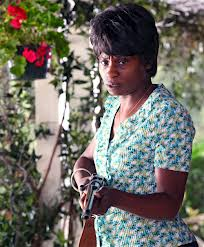 It is never too late. Adina Porter, who has been billed as special guest star on TRUE BLOOD since Season One has the privilege of becoming listed as a regular cast member of the show in its final season.

She plays, of course, Tara’s mother Lettie Mae Thornton who has always been fighting for her daughter’s welfare and struggling with her own. She appeared in only two episodes in Season Six including the gripping Season Finale Radioactive. In that episode she offered herself to Tara to nourish her in an attempt to make up for her neglect of Tara while she was growing up.

Adina Porter has also been seen on HBO as Kendra James in both seasons of Aaron Sorkin’s THE NEWSROOM and had roles in two HBO Films presentations, GIA and LACKAWANNA BLUES.

We can speculate that Lettie Mae may be more prominent in Season Seven. We got a long wait until June of 2014 to find out.