As these ladies have been shouting all along, “We made it to the top.” Yeah, A BLACK LADY SKETCH SHOW has been doing alright. Here via a press release are details:

HBO has renewed the sketch comedy series A BLACK LADY SKETCH SHOW for a second season, it was announced today by Amy Gravitt, executive vice president, HBO Programming. “It’s been thrilling to see the audience embrace the characters that Robin, Ashley, Gabrielle and Quinta have brought to life,” said Gravitt. “We had a blast making this groundbreaking sketch show with Robin, Dime and all of the writers and producers, and I can’t wait to see what next season holds.”

Laugh-out-loud funny and not afraid to be controversial, A BLACK LADY SKETCH SHOW touches on such culturally relevant themes as social norms, anxiety, religion, sex, dating and relationships. Each episode consists of five to six sketches, showcasing the comedic talents of Robin, Quinta, Ashley and Gabrielle portraying an array of dynamic and varied characters, as well as 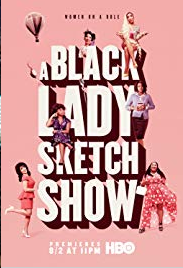 hyper versions of themselves in interstitials featuring four friends stuck in a house during an end-of the-world event.

Unprecedented in sketch comedy TV history, the show is created by, written by, directed by and starring an array of black women. Hollywood Reporter hailed A BLACK LADY SKETCH SHOW as “energetic, funny and wonderfully distinctive,” while TV Guide praised it as “unapologetically goofy” and “cinematic and grounded.” Los Angeles Times calls the series “exceptionally well realized” and “winningly played.”

If you haven’t seen it yet you can find in across HBO’s platforms and spy there the likes of Angela Bassett & Laverne Cox guesting in the “Bad Bitch Support Group.” But the surprise is all the versatility in the lead players. Robin Thede, Quinta Brunson, Ashley Nicole Brown and Gabrielle Dennis.  You’ve got to see it to believe all the characters these gals can play! There are only six installments this year but maybe for 2020 they’ll up the quantity.

Catch our reviews and let the ladies make you laugh. Enjoy A BLACK LADY SKETCH SHOW Friday night at 11:00pm.