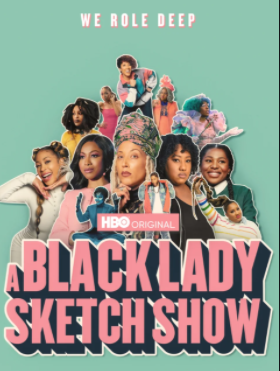 A Black Lady Sketch Show is moving full speed ahead in its sophomore season, and we wanted to take a moment to highlight some of the funniest sketches of the last few episodes. While the running theme of surviving an apocalypse continues to occur throughout, we’re introduced to new sketches with some of the best writing and comedic timing yet. Also, get into these episode titles. Anyone else sit and anticipate the sketch that’ll say the episode title so you can be in on the joke, too? No? Okay. Fine :).

Check out these standout sketches and then seek out ABLSS for yourself.

Episode 2: “So You Just Out Here Chloroforming Anybody”

I am guilty of joining the Peloton cult because of Covid, so when the sketch, “I Wheel Survive,” came on, I’d never felt so seen. And so we land in an all-women’s spin class, led by Robyn’s character, who helps the women “shed the weight” of their last relationship to trap music with some of the weirdest mantras you’ll ever hear. As each of the women recall their stories, they come face-to-face with their instructors who leaves them with such inspiring quotes like: “if he waste yo years, he don’t deserve yo tears” and “delete his number from your phone, get like me and drink alone.” Oh, and to make things funnier, the pictures of their partners are posted so, once the instructor realizes her last student was actually the reason she’s alone, she hops on her bike, unlatches it, and literally rides out of the class, to go and take him for herself. Epic! Go ahead, see for yourself. The sketch is below:

Episode 3: “Sister, May I Call You Oshun”

The episode opens with a BANGER. “Black Table Talk,” led by none other than Dr. Haddassah (a recurring Thede character) herself. And honestly,  she makes the hosts of the Facebook Original Series, “Red Table Talk” led by Jada Pinkett Smith and her family, look like amateurs. Okay, kidding, but let’s take a moment to celebrate the commitment to the hertip character herself. We really do deserve a movie solely following this woman and her antics. What this sketch does so brilliantly highlights the sheer ridiculousness of people and their thought process. Her featured guest was a mega powerhouse, Gabrielle Union, and if you didn’t know what to expect, her first statement lets us know we’re in for a treat. Dr. Haddassah shares that the topic of the episode is: “women in the workplace… why?” and that’s when I knew we were in for a treat. What I also appreciate is the unapologetic way in which the writer’s room for this series writes. The writers really don’t care if you “get it”. They made this show for black people to enjoy, so when Gabrielle says her daughter Kaavia has her on a strict curfew, we know that her “shady baby” is indeed THAT girl! This is five minutes of pure excellence. Don’t take my word for it, enjoy it below.

Sure, a few sketches carried on from last season, but one of the standouts this season by far occurs in this episode: “The Last Supp-her.” This is pure gold. Anytime the ladies enter the realm of religion/social etiquette, prepare for them to not only speak the truth but also, teach. This sketch takes place right before the infamous last supper photo is taken. We’re welcomed into a privileged conversation where the women who were alive during biblical times not only call out the obvious predictability of the men of that era but make it clear that women were running things then too. Nothing is more funny than when they realize that none of the women’s accounts of their homie JC (Jesus Christ) life will be in the bible. Crazy, right?

Episode 5: “If I’m paying these Chili’s prices, you cannot taste my steak!”

There’s a sweet blend of being friendly and professional. In, “Gel It Like It Is,” we get to watch the deeply intimate relationship of a woman, Simone, and her nail technician, Kima. Like Black men and their barbers, Black women tend to have their roster of preferred stylists. But what’s so magical is the smoothness at which these two queens leverage their relationship through laughter, all the while working through the craziness that is upselling products and services. The way Simone is able to effortlessly deny Kima at every corner, all the while recognizing that as the services seemingly get reduced, the pricing is not only inconsistent, but down right crazy. But you can’t tell it on the surface. These two have mastered the art of “keeping it cute,” while getting their nails done. After all, you’re trusting your tech with one of the most precious parts of your body.

That is just the tip of the iceberg of the skits on tap from this show. Maybe, you have a different set of favorites to share in the comments below? Maybe, you have yet to binge these installments with Thede and company. Well. get on it and have a good laugh! A Black Lady Sketch Show can be found on HBO and HBO Max.