I don’t expect that all of you reading this will agree with me and I have no intention to try and sway your opinion because it’s a rather superficial opinion, the same as asking one’s taste in music or their favorite movie (I promise the rest of the article isn’t nearly as pretentious as this sentence). That said I don’t particularly like Bill Compton, especially now that he’s turned blood god ala “Blade.”  He was interesting as a former confederate soldier who just wants absolution for the things he’s done in his post-life, but zealotry has a tendency of unwriting characters. Because they aren’t following what most would deem is logic, and the audience can so clearly see that what they are doing is completely wrong, they move from the comfort of three dimensions to the cramped living space of two. Here are five vampires that are far more entertaining to watch than Bill Compton. 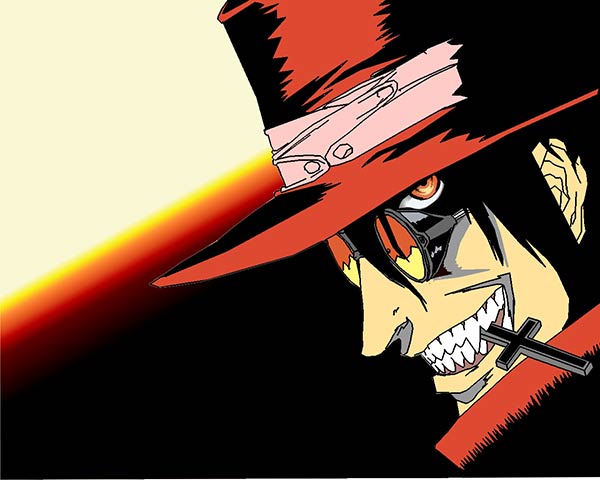 Japan is weird. My xenophobia aside, anime is awesome and the “Hellsing” series, in both flavors, “Regular” and “Ultimate” are both top notch stories of vampirism, zealotry, and Nazis in London. Alucard in this iteration of the progenitor vampire’s tale is a servant of England, fighting and eradicating the vampire rabble that roam the night feasting where they don’t belong. His guns are long and they are big. His powers are mystifying and locked away, only to be unlocked when fighting against a worthy enemy.  But he’s a gentleman first and foremost. Heavy with Christian themes but not many attempts to actually convert you, this is the story of a vampire who knows the most important part about living forever: escaping boredom. 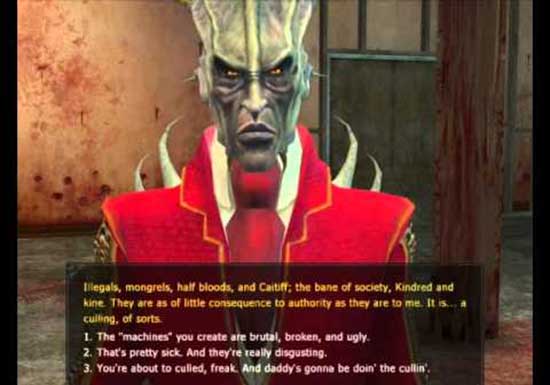 I don’t mean to sound like a hipster but odds are you’ve never heard of this guy from a near ten year old game that unfortunately a lot of people didn’t buy. Though this guy’s wardrobe is similar to Alucard’s, he could not be said to be like him in the slightest. A Tzimisce is a design of pure horror, one who would strip the sinew and bone of vampire and mortal alike and reshape them both into something…new. It’s creations are as brutal as they are horrific. And they are merely sculptures of an artist, created for a higher purpose. In this case,  to tear apart at the vampire status quo in order to prevent the coming doomsday. He’s something straight out of your nightmares. 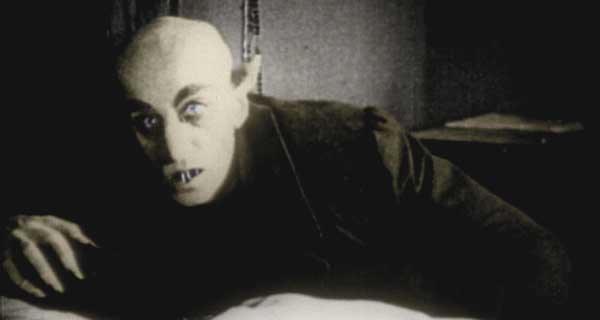 The first movie adaptation of the vampire. And despite being a movie that’s almost 100 years old, it’s still one of the most eerie and unsettling things I’ve seen in a movie. You think that movies these days have bad special effects, think about how bad they were for films back then. So directors got smart fast. Low lighting, and proper framing could make anything ten times scarier than it could be out in the open. By tapping into a primal fear of the unknown they could unlock your mind and fiddle with the inside, like a master violinist. You may not be as startled when a door flies open like in the cheap horror movies today that love using jump scares, but the skulking frame of the vampire will unsettle you to your core. Leave the lights on when you watch this. And someone in the other room. Or have somebody there next to you. 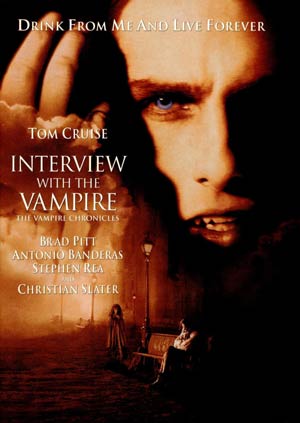 Though I’ve never met the man, I’m familiar enough with his antics to believe that Tom Cruise is probably crazy. So I’m sold enough on a movie where he has to play a character with a more “restrained” madness, if only to witness just how Cruise could possibly portray that. And though this movie predates his initial reports of wackiness (at least so far as I can recall), it’s still fun to think that not just behind the eyes of the character he’s portraying, but in the guy himself, there’s some sort of thing that wants to break out. And the way he bounces along in unlife while his prodigy Louis (Brad Pitt) has his soul continually torn by the need for blood to survive is just fascinating to watch. It’s similar to the way Jack Sparrow flutters along with Will Turner in “Pirates of the Caribbean.” It’s fun in a grim sort of way, and the instability festering behind it all will always make you wonder if he could snap and just tear his world down. After all, he’s been alive long enough that he’s probably had many companions before Louis. When will he grow weary and decide he needs someone else? 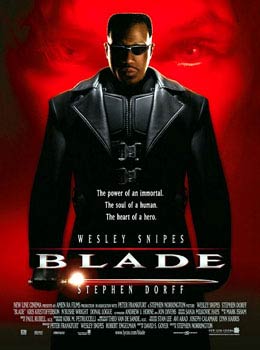 A bit of an obvious choice given the other characters on this list but he is a vampire and he is awesome nonetheless. A vampire born of a human mother who was bitten while pregnant, he is a daywalker who has all their strengths and none of their weaknesses. He uses those gifts and the training imparted to him by his mentor Whistler to eradicate vampire kind in all its forms. One of which is strikingly similar to the form Bill Compton has taken. A vampire who has fallen into a puddle of blood and has become reborn a  god of his species after a religious awakening in a world ironically more dedicated to the facts surrounding their unlives. And while he is a rather generic character in himself, he has a power that all other vampires should revel in. He is a marvel character, and that means he can fight alongside any other marvel character. He’s already had cartoon crossovers with Spiderman and fought alongside the  Avengers albeit only in the comics. It’s crazy. It’s awesome. Bill Compton will never get to do that.

Got any other tips for Bill Compton on this season of True Blood?  Leave your comments below.