First, can I just say how jarring it is to go from Game of Thrones to Veep? 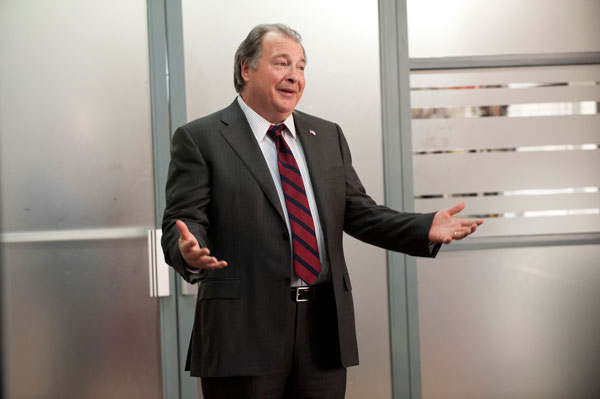 Yet, that is what HBO is giving us on Sunday nights. From Westeros to Washington.

Episode two of Veep begins with Mike. Oh, Mike. Still on his honeymoon, even if his “honeymoon” seems more like a stay-cation. Couldn’t Mike have done better than that? Maybe the beach? The Grand Canyon? A cruise? Yes, now that I think of it, there should really be a spin-off series with Mike, his wife, Gary, and Jonah on a year-long cruise. All four of them, stuck together on a boat, in the middle of the ocean, for a solid year. That would be comedy gold. Gold! Do you hear me, HBO?

Selina tours her new campaign office, you know, for her campaign that isn’t really official yet, and meets Kelly. Kelly, you understand, is the world’s worst photographer/videographer. And, of course, she’s working on Selina’s campaign. Who hired her? It’s never revealed, but that person should be…flogged, or something. Kelly does have one of the better lines of the episode when she declares that “yeah, this thing definitely doesn’t do video” after Selina does, for the camera, about three versions of the same short speech.

Also, Richard is still here. After his disastrous stint on Selina’s book tour, I was really hoping he’d stick around. They guy is so incompetent and played so well by Sam Richardson, he really should be a series regular. His best line of the night: “Ma’am, I’m going to follow you wherever you go. I’m going to be like a Disney animal.”

Now it is time to talk about the real star of the episode, Jonah.

Jonah actually shows up to Mike’s house, where he introduces himself to Mike’s kids by saying “Yo, what’s up y’all punk-ass bitches?”

Jonah is there to ask Mike to join his “consulting firm.” This is hilarious for many reasons, so I’ll mention just a few.

So, of course, Mike would definitely want to get in on some of that.

The rest of the episode deals with Selina having to deal with the fact that POTUS has suddenly come out as pro-life. Selina feels like she doesn’t want to also declare herself as pro-life, but needs to nuance her position so as to be appealing to everyone. When Maddox (who is also trying to get the party’s nomination) releases a statement essentially playing both sides of the issue, Selina begins to panic. Danny Chung, another one of Selina’s political opponents, comes out and says that he supports abortion until week 22, leading Selina to say that she can’t stick with her proposed 24 week cut-off, because that would make her “the most liberal and the most female.”

It is with the abortion issue that Veep really hits upon something important, showing that politicians don’t necessarily believe all of the moral platitudes they purport to and that much of what they do is done for pragmatic reasons and to simply win votes.

Here’s a preview for next time: