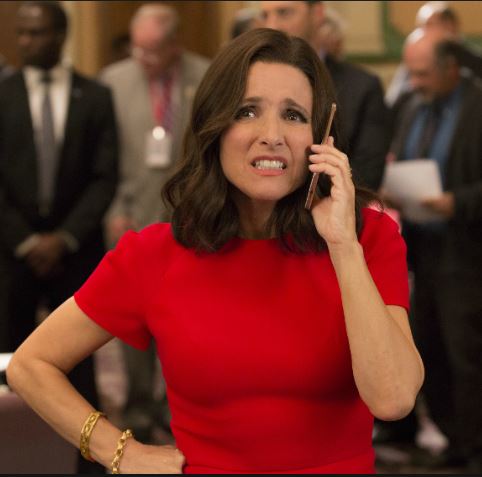 The HBO political comedy that is VEEP is now before the cameras. The series is shooting its seventh and last season and it will only be seven episodes long. What slowed down the whole process, if you remember, is Julia Louis-Dreyfus’ health.

When Louis-Dreyfus’ admitted she had breast cancer, treatment was naturally the focus halting the production schedule of the show. She has since had chemotherapy followed up by surgery and a recovery period. It wasn’t until just this August that she got back to work. She has dropped images of a table read of cast/crew on the seventh season and has expressed gratitude to that cast/crew for their superb commitment to VEEP and for the medical staffs who have taken her from diagnosis to treatment. Regardless all involved have to get ready to wrap up the series. JLD states – “It became clear that this season should be the last season. We don’t want to repeat ourselves or wear out our welcome. The story has a finality to it that feels end-of-series.”

Exactly what is ahead has not been spelled out. Louis-Dreyfus, since it is her usual nature, may drop something to Twitter or Instagram when the series is in the can but there is not much for HBO to work with yet to get a teaser up. Oh, watch them prove me wrong! We do know, however, what will be addressed is a Presidential run for both Selina Meyer and Jonah Ryan (Timothy Simons. That showdown in itself sounds insanely absurd and funny and thus makes complete logical sense that it will play out this way for the characters.

We say thank you to six-time Emmy winner Louis-Dreyfus and all of VEEP and we look forward to the final season. No exact premiere date has been set but we hope that VEEP and GAME OF THRONES will come our way April 2019. We’ll keep you posted.