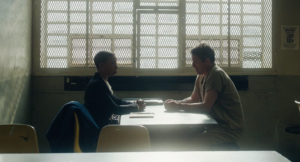 Past the midway point of the season, are we seeing a potential Fraser v. Fraser situation emerge? Grace (Nicole Kidman) is seen coming within steps of Elena’s (Matilda De Angelis) studio where she was bludgeoned to death. Though police have moved on from her as a suspect since she was caught on other cameras continuing her walk. Well, that clears the waters for a moment. Their new attorney Haley Fitzgerald (Noma Dumezweni) is getting her hands dirty and jumping into the case. She challenges Grace which isn’t appreciated, however, I did appreciate watching her size up Jonathan (Hugh Grant). She asks about other affairs and he admits to a one-off after losing a patient. Honestly, I’m having a very hard time believing that. Knowing what an ego complex this guy has, I can’t imagine there’s only been one other woman.  And frankly, I don’t think Haley believes him either. I loved how honest she is about not being funny. It was actually quite hilarious.

Meanwhile, Grace meets up with the old defense attorney Robert Adelman (Douglas Hodge). He reiterates that he doesn’t think Jonathan is the killer, just a douche. But I’m not sure I’m convinced. If Elena threatened to finally come clean to Grace, maybe Jonathan snapped and grabbed the nearest object? Well, he’s getting out on bail. Franklin (Donald Sutherland) agrees to post the cash and has no issues telling him how he feels about the situation. He doesn’t like Jonathan, never has which he admits to Grace; saw too much of himself in Jonathan when he first met him, a man who wouldn’t be faithful.  Wow, poor Grace is getting all sorts of family reveals lately. Hubby has a love child and daddy was never faithful. Grace goes walking to clear her head, as she does. She eventually garners a follower and a medical emergency.

Henry (Noah Jupe) is still getting by but does accidentally bump into Miguel Alves (Edan Alexander). He apologizes, of course, but he’s under scrutiny too. The principal is urging homeschool for now while dealing with everything. Franklin and his wallet feel differently. In fact, based on his c*cksucker speech, I’m wondering if we have a new suspect. He has money, he wouldn’t even need to get his hands dirty in order to protect his daughter… Grace is dealing with the detectives again, and they still don’t trust her. Fair, it’s their job to be suspicious and think people are probably lying to them. But I would think by Grace’s shock at the fact that Elena did a painting of her, you can probably see she didn’t pose for it. At this point, starting to buy the obsessed thread a bit more. I certainly felt it was odd of her to show up at the gym with Grace since her son is on scholarship and I’m sure Grace has a fancy gym. Knowing about this now, starting to actually trust Jonathan’s word a bit more. Not a ton, mind you, but more. He’s so emotionally manipulative with Grace and for a moment, I was worried she would lose her clarity. 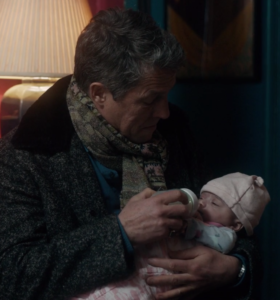 Jonathan has some clarity, or stupidity perhaps.  He goes to see Fernando (Ismael Cruz Cordova) and his daughter. He’s so casual with Miguel, who is clearly terrified. I get he was your patient, but please believe, this kid wants nothing to do with you. Jonathan doesn’t mind the idea of taking custody of his daughter, but this isn’t really the time. It’s called witness tampering, so you best hope everyone keeps their mouths shut. You need all the good public opinion you can get right now and Haley’s not wrong about TV being the way to go. Jonathan gets the chance to open up and admit that he loved her and that while everyone is calling him a murderer, he’s actually grieving a person he loved very much. Well, the baby is a few months old and roughly 9 months for pregnancy, so they were seeing each other for at least a year. Enough for him to be blatant about it at work to the point of being fired. But who are you shifting the blame to Jonathan, if it isn’t you?