I’m fresh off of The Third Day and I have a feeling that religious aspect aside, The Undoing is going to spin a good yarn too. First off -Holy stacked cast of talent!  Nicole Kidman, Hugh Grant, Lily Rabe, and Donald Sutherland are the big names headlining our new show. Kidman and Grant star as husband and wife, Grace and Jonathan Fraser. Grace is a therapist and Jonathan is a pediatric oncologist. Talk about heartbreaking career choice, but by in large we see Grant maintain a perky, cheeky attitude throughout the show (for the most part). The show sets the stage nicely by giving us something horrific off-screen and then time travels us back two days. Grace is on an auction committee at her son’s school to help fundraise.  Considering it is $50,000/year, I’m surprised the school needs help, but they like to give away scholarships to less fortunate kids so throw more money at them to make them feel good! As a scholarship kid at a fancy school myself, man alive did I end up feeling like a poor kid. I wonder if that will come into play at all…

Because we have a new scholarship mom who has joined the committee, Elena (Matilda De Angelis) who has one son in school and one newborn. She’s interested in helping but the women don’t explain much or give her a chance to catch up or contribute really. Not surprising, she ends up kind of pushed aside, and in a total power move, she whips out the boobie when it is time for the baby to feed. Most of the women aren’t thrilled, but as Grace points out, her kid is hungry and she needed to feed it. It certainly made the women pay attention to her, though not necessarily positively. When she sees Kidman again later, she reveals more of herself, physically and emotionally. We get the sense she’s not doing well, perhaps even post-partum. We can see this girl is a bit younger than Kidman and struggling, though not necessarily sure with what yet.

The auction is on and everyone arrives dressed to the nines! I would like a copy of Kidman’s dress. I have utterly nowhere fancy to go, but goddamn, it is gorgeous and I will just wear it and sit in my living room, feeling like a vision. Everything is going well until Grace finds Elena crying in the bathroom. She offers to talk sometime, and Elena is grateful. So grateful, she gives her a smooch. Well, well.  But in the end, Elena rushes off, seeming upset. Grace returns to the party, and a while later Jonathan has to leave for a patient. Everyone returns home after the party, including Jonathan after seeing his patient, breaking down into tears in Grace’s arms, seeking physical comfort.

We’re back up to real-time and now know, the tragic event of the show opening was Elena’s son (Eden Alexander) finding his mom’s body in her art studio. She never returned home after the auction, and soon a text is sent out to the school families. Grace, in a session, does not get all the information right away. But as soon as she does, she tries reaching Jonathan, who is in Cleveland for a conference. Hmmm, hubs not answering? That’s not suspicious at all! The writer’s brain in me is already suspect 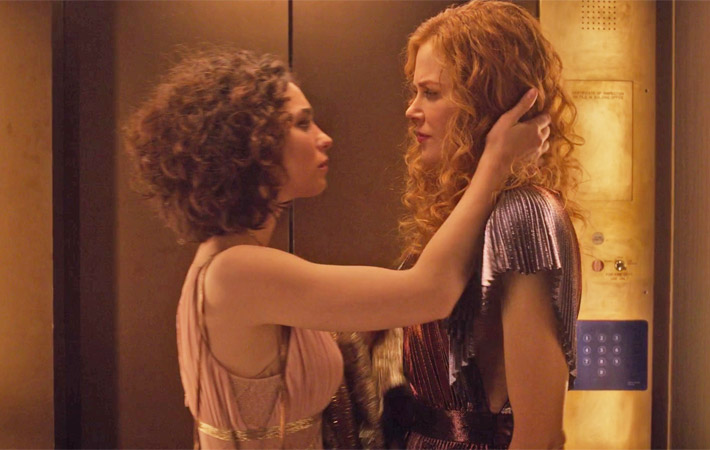 ing plots, who-dun-it, and who is covering it up. I have some theories of how Jonathan might be involved and Grace’s daddy Franklin (Donald Sutherland) will become a key player I think. For now, I’m ready to get spun up into the web of secrets and lies and tragedy.  At least, for five more episodes.

Get on board with The Undoing Sunday nights at 9:00pm and on the streaming sites.