Yesterday, HBO dropped it’s second full-length trailer for Game of Thrones. With only twenty-four days to go until the premiere of Season 7 of HBO’s award-winning fantasy series, expectation and excitement are at an all-time high as fans prepare for what looks to be an amazing season. With the arrival of winter,  some recognize personal feuds must be put aside in order to survive, while others remain stubborn in their bid for power, pleasure, and personal gain. Above it all, dragons soar and the indefatigable White Walkers creep steadily southward. Winter is here. The game of thrones wages ever on, but the war for survival begins this July. Watch the trailer and then join us below as we discuss this tantalizing taste of what is to come.

Backed by the haunting sound of Ramin Djawadi’s Light of the Seven, which was perhaps the most memorable score from Game of Thrones’ last season, this second trailer begins slowly, with a long shot of Sansa Stark before slowly unleashing the uncontrolled chaos that is war. Jon Snow, back beyond the Wall, faces off against some unseen threat, Unsullied soldiers surge, and later fall, Theon Greyjoy and his sister Yara watch as their fleet succumbs to flames, Jaime Lannister charges headlong into battle, lance in hand. In the midst of this madness, there are moments to catch our breaths– Cersei Lannister, now Queen, stares stubbornly into the shadows. Someone polishes a blade, someone else runs their hand along the Painted Table of Dragonstone. Littlefinger lurks smugly in some dark corner– earlier he urges Sansa to “Fight every battle everywhere, always, in your mind,”– it’s a good reminder that there are more ways to play at war than with a sword and shield. Bran, who we find seated in a wheelchair, eyes white and warging, is just as capable of affecting the final fate of Westeros as Beric Dondarrion, whose flaming 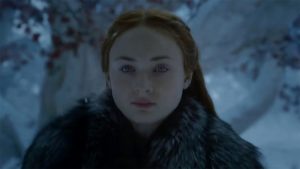 sword engulfs the screen for a breath instant in its fierce glow. With dragons huffing in our faces and flames and arrows ricocheting from all directions, it’s easy to see that the upcoming season will be action-packed. It is the quieter moments, though, that remind us of the stakes. Missandei and Greyworm share a lingering kiss. Theon Greyjoy falters and falls to his knees, somewhere on a rocky beach. Jon Snow stands alone, outnumbered and surrounded in a frozen wasteland. There will be losses, and death and suffering. War has never been pretty, especially not in Game of Thrones. In the end,  it is Sansa, who knows this better than anyone, who dominates the beginning and end of the trailer. In its fleeting final moments, she reminds us that “The lone wolf dies, but the pack survives.” It is only united that Westeros will endure, but whether the fractured factions and families that populate it will be able to put aside their differences is something that we will have to wait until July 16th to find out. The good news is, that is not too far away.

What did you think of the trailer? Comment below