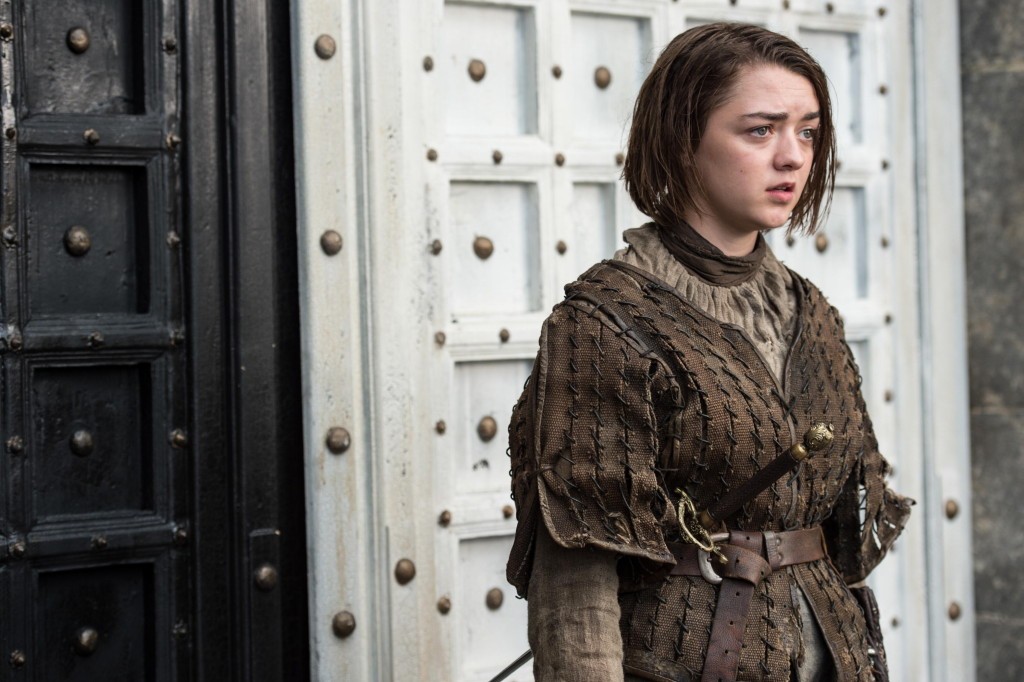 A recently released clip from Season Five has given us a better look at the House of Black and White which will be a pivotal location in Arya Stark’s storyline this season. The actress who plays Arya, Maise Williams recently was a guest on the talk-show Jimmy Kimmel Live  and was able to share a brief look at one of her characters’ scenes from Season Five.

In the scene, we see Arya, standing before two doors–one black and one white, which stand ajar. As the scene begins, an old and  grizzled man appears from the darkness inside, fixing Arya with a impenetrable stare. “Hello,” begins Arya, uncertainly, and after an awkward pause in which the man studies her silently, she adds “Valar Morghulis.” The man continues to stare impassively at Arya in an unnerving way until she brings out the coin which Jaqen H’gar gave her earlier in her storyline. “Jaqen H’gar gave me this,” Arya says, but the man is unimpressed. Finally he speaks abruptly, “No one here by that name.” The man makes as if to go back inside, and Arya grows anxious, “Please!” she shouts and the man turns back towards her. “I crossed the Narrow Sea,” Arya declares, “I have nowhere else to go.” The man responds curtly, “You have everywhere else to go, ” before shutting the door in Arya’s face, despite her protests. With that the scene ends.

Readers of A Song of Ice and Fire will recognize the doors that Arya stands before in the clip, as the doors of the House of Black and White– the head-quarters of the Faceless Men, a sect of deadly assassins who worship the Many-Faced God. Arya will become initiated into the Faceless Men– a journey which will leave her dramatically changed. It seems that in Season Five, Arya’s story-line will focus on her journey to becoming an assassin, and audiences will gain a look at the extraordinary skills of the Faceless Men as well as the “tough love” with which these skills are taught to Arya. It will be fascinating to watch Arya’s character evolve this season as she journeys closer to achieving the revenge she craves.

Are you excited to see Arya in a new location? What do you think this season will hold for her? Comment below!