Yesterday, HBO brightened everyone’s Thursday a little when they released the first trailer for Game of Thrones Season 7. In a departure from the frantic, information-packed trailers of past years, this one focuses only on a few characters and sets a dark, brooding tone for the upcoming season, which will premiere later this year on July 16th. HBO has been largely reticent about what the upcoming season will hold, and it continues this trend in the new trailer, which tells us little, instead, reaffirming the stakes, and reminding us of successes some main characters have enjoyed. The scene is set, the rulers are seated, but above it hangs the looming threat of winter… and what comes with it.

Check out the trailer and then join us in breaking it down below.

The trailer focuses on three characters: Cersei Lannister, Daenerys Targaryen, and Jon Snow– all who have recently found themselves in places of power. We follow the three of them as they slowly walk to and ascend their thrones. For Cersei, this is the Iron Throne itself, for Daenerys, her ancestral seat at Dragonstone, for Jon a simple chair in the great hall of Winterfell, one worthy of the King in the North. The show is Game of Thrones, but the titular throne has always been singular, even as those who have coveted it have multiplied over the years. Now, each contender for ultimate power is a king or queen in their own right, and they have suffered and sacrificed greatly. It is interesting to note how Jon Snow, always rather down-in-the-mouth, looks practically mournful about his position of power, while Cersei Lannister cannot contain a smug smile of triumph. Daenerys, fresh off the boat, and in a new, conservative costume, looks cool and confident. Once seated, the trailer zooms in on each character’s eyes in succession, they blink, the candles go out– and the screen goes dark. Cersei gives a little huff and her breath fogs. Winter has come to Kings Landing at last. Suddenly, the wind is howling and we are deep inside the piercing blue eye of a White Walker. We slowly move out until we can see a section of the Walker’s face. The trailer ends.

Watching this trailer, there are a few tasty tidbits to digest. The first is that Daenerys has apparently arrived in Westeros and taken control of her old family home, Dragonstone (former residence of Stannis Baratheon). This isn’t surprising, but it is exciting to know that Daenerys has finally reached Westeros after years of setbacks. Her throne is also quite striking– roughly hewn from rough stones, but elegant all the same. A small detail that’s also interesting is Cersei’s choice to replace all the window decorations in the throne room with Lannister lions. Gone are the seven pointed stars of the Faith of the Seven. One gets the feeling religion has left a bad taste in Cersei’s mouth. Finally, we can’t ignore that last White Walker face. That nose looks awfully big for a regular White Walker– indeed, that nose is rather reminiscent of a giant’s. Long ago, Old Nan told us that we all lived in the eyes of a blue-eyed giant. Could that fairy-tale hold some truth? Either way, it’s a nice homage. Finally, it’s a little interesting Euron Greyjoy isn’t featured in this tribute to Kings and Queens. He did win the Kingsmoot, after all, did he not? Let’s hope that he doesn’t get wind of this terrible slight. It does make one wonder if this is a suggestion that Euron won’t feature very heavily in the upcoming season, or if it is just a recognition that the Greyjoys don’t have a very big fan base.

This new GOT trailer is a different approach than we’ve previously seen– it’s beautifully crafted and gives us a lot to think about. What was your favorite part? Comment below! 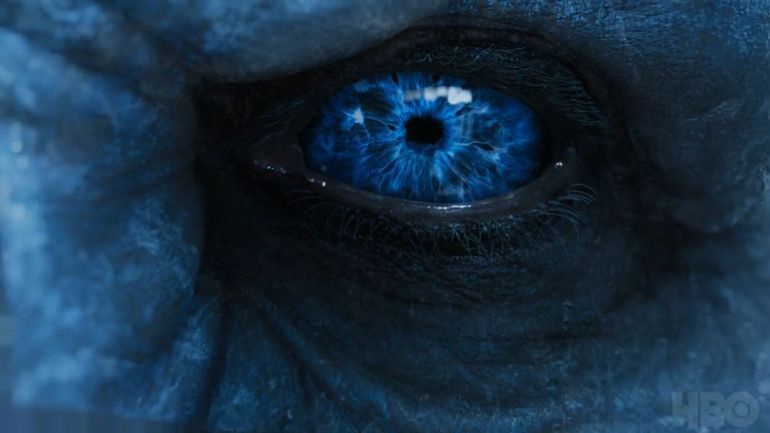