We think that everyone is aware that Larry Davis is returning. The hackers tried to burst our bubble but HBO has been teasing us with a few clips regarding Season 9 all along. Here is one place is what we have seen about the next season of CURB YOUR ENTHUSIASM which debuts Sunday, October 01 at 10:00pm ET.

We have been waiting since 2011 for this guy to return. Yeah, he did in HBO Films: CLEAR HISTORY but that wasn’t the tongue-in-cheek version of himself. What the hell took him so long to give us a Season Nine?

Figures. At least we got Larry David & company back and they are embarking on the new season on October 01 and running for a total of ten episodes. In no uncertain terms he doesn’t let us forget that date in his pompous little way. Observe.

Okay, enough silliness we say. Just what is the meat and potatoes of this upcoming season anyway?

There we go, that is what we were looking for. Seems we get more of the grumpy old Larry David we know and love. Variety actually got somewhere and talked to someone with a bit of knowledge on the matter. Here are excerpts from an interview with executive producer Jeff Schaffer:

Variety: When you and Larry first started talking about doing another season of “Curb,” how concerned were you by the sheer amount of time that had passed for characters and how to work in where they had been and where they are now?

Jeff Schaffer: It was important to us to come up with an arc that addressed in the very beginning of it where he’s been for the last five or six years. There were really two things we wanted to do: make sure everyone would be back and find out in the beginning what Larry’s been doing since Paris. [The eighth season ended with the character of Larry in Paris with his friend Leon (J.B. Smoove) just after he accused Michael J. Fox of harassment.] And what he’s been doing provides the jumping off point for the insane first half of the season that gets much crazier in the second half. These are dark times, and pettiness, like freedom, dies in darkness. So this season is dense and full and big because there’s been a five-year log-jam of indignities and violations of etiquette. He’s been hoarding indiscretions like Scrooge McDuck, and now he’s finally going to let them all out. 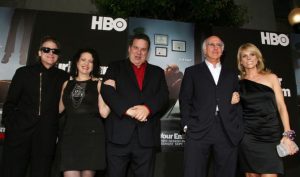 V: So where does the ninth season premiere pick up?

JS: We pick up five years later, and everything you love about the show is back. Larry shares brisk opinions with everyone from Uber drivers to oyster shuckers. Larry and Cheryl [Cheryl Hines] are still divorced, and they’re basically trying to live their own lives, but things are going to get very complicated because you have single Larry and single Cheryl. Larry’s been working on a singular project for the last five years, and now it’s time to show it to other people, and we’ll see how that goes. Jeff actually gets to work as his manager more this season!

V: Did everything make the final cut?

JS: Yes, HBO’s been fantastic that way, and episodes are going to be longer.

Well, there you go – more CURB than we expected. We begged for Larry to come back and now we better not complain about his attitude. The new season brings back cast favorites Cheryl Hines as Cheryl, Jeff Garlin as Jeff, Susie Essman as Susie and J.B. Smoove as Leon, as well as series veterans Richard Lewis, Bob Einstein, Ted Danson and Mary Steenburgen.