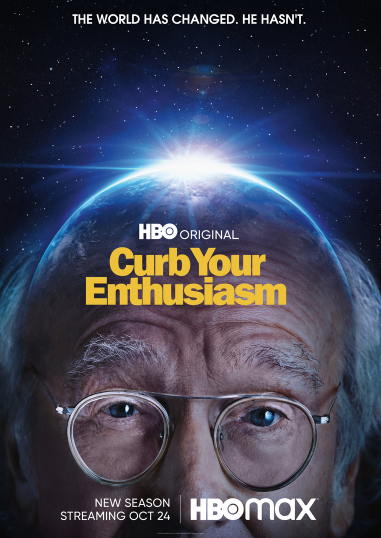 In September 2021, Home Box Office released a teaser trailer inspired by the iconic opening of Stanley Kubrick’s 2001: A Space Odyssey. Any film buff or moderate pop-culture enthusiast is acutely aware that 2001’s opening features an overture of a barely visible moon with the Earth rising in the background, and the even more distant Sun rising above the Earth.  The song “Sprach Zarathustra” stirs as all of the aforementioned transpires. However, instead of the Earth and Moon being lit by the Sun, the HBO teaser revealed the top of Larry David’s bald head (a bald head almost as iconic as Michael Jordan’s), and “Sprach Zarathustra” being overtaken by Curb Your Enthusiasm’s “Frolic” score.  The tagline for this series’ 11th season is The World Has Changed, He has Not, and damn…no lies were told.  Larry David continues his streak of gold standard premium cable entertainment.

Seinfeld was the show about nothing. Curb Your Enthusiasm is about the man who made the show about nothing. Over a 20-year span, 11 seasons have been churned out by writer/producer/actor Larry David, and the quality of the series has not faltered. The following is a breakdown of the 11th season’s 10 episodes.  ***Be warned, the description of the latter episodes delves into TV-MA content***.  No disrespect to any person is intended.

Episode 1 features an unusually serious tone present in the opening scene. Larry is awakened in the dead of night by a burglar’s ill-fated robbery attempt. The would-be thief tripped and drowned in Larry’s pool.   When the police arrive, they chastise Larry for not having a fence around his pool, which is a city law.   This event is the catalyst and main story point for this season. Leon, Larry’s live-in friend since season six, break’s up with his girlfriend Mary Ferguson, because she walks into a glass door, causing Leon to no longer be physically attracted to Mary. Leon embarks on a quest to find another woman named Mary Ferguson, because he has non-refundable tickets to an unnamed Asian country in his name and Mary Ferguson’s name. Larry is extorted by a restaurant owner named Marcos, the brother of the man who died in his pool and forces Larry to cast his daughter Maria Sofia in Larry’s Netflix show. Only in America can a homeowner be held accountable for a thief’s stupidity. 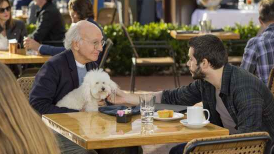 Larry’s Netflix woes continue. Maria Sofia’s acting is not refined enough for her to be a background extra in a Steven Segal straight-to-dvd film. After awkwardly yet successfully pitching Maria to the Netflix executives, Larry attempts to secure actor Dylan O’Brien as the lead in the show to portray a young Larry David. O’Brien is not very fond of Larry’s antics but has a change of heart when witnessing Larry’s care of a puppy. O’Brien is later vexed when discovering Larry used the new Mary Ferguson’s dog to sway his opinion about joining the Netflix show. Larry ultimately loses the Netflix deal after arguing with the studio executives over a loose toilet seat in the studio’s public restroom. Only Larry David would let a multi-million dollar deal fall through due to a minor maintenance issue.

Larry’s best friend and manager Jeff secures a meeting with Hulu to pitch the young Larry David series. Hulu is onboard with the concept; however, they request an audition tape for Maria Sofia. Desperate, Larry asks his ex-wife Cheryl to give Maria Sofia acting lessons and to record an audition tape. Cheryl tries to film an audition tape for Maria Sofia, and it is a real shit show. Maria mistakenly believes Cheryl stole her jacket and physically attacks Cheryl while the camera is still filming. The Hulu executives view the footage and cast Maria due to finding the incident to be comedic genius. 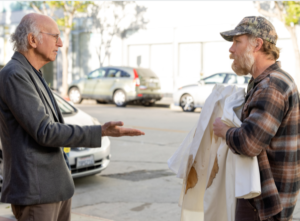 Larry leaves an optometrist appointment with dilated pupils and collides with a Klansman named Joe, spilling coffee on the supremacist’s robe. Larry takes the robe to a Jewish dry cleaner. The cleaner originally refuses to clean the bigot’s robe but acquiesces due to Larry saying they should not discriminate. The casting continues for the Hulu series, with Woody Harrelson being courted for a role. The leftist Woody Harrelson is tricked into believing that Larry owns a cow to procure milk, instead of buying dairy from the store like most people. The deal is nearly secured but Harrelson drops out of the deal after refusing to pick up a half-eaten grape off the ground. Larry is more upset about the adrift fruit than losing Harrelson. At a rally, the Klansman puts on his new robe but is attacked by other douche-bag members when they see it has the Star of David sewn on the back. Joe angrily goes to Larry’s home at night to confront him, but Larry blows a shofar (a Jewish ceremonial horn) causing the entire neighborhood to wake up, effectively scaring away the Klansman.

These episodes revolve around cultural appropriation and societal norms. At an upscale Japanese restaurant, Larry offends the sushi chefs when he also uses the greeting “Irasshaimase” to greet a date named Gabby. Larry did not know that the greeting means “Welcome to my restaurant.” During the date, he and Gabby exchange secrets: Gabby had sex with one of her students when she was a high school teacher and Larry’s secret is a shortcut through the San Fernando Valley. As revenge for Larry’s use of their greeting, the chefs intentionally yell “Irasshaimase” loudly, causing Larry to spill soy sauce on himself. A juvenile shouting match 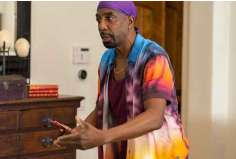 between Larry and the chefs ensues.

On a second date, Larry learns Gabby told his secret about the shortcut, which is the reason that Larry missed someone’s funeral. When the two arrive at the restaurant, the chefs yell “Irasshaimase” and yell out Gabby’s secret as well, causing her to storm off. Returning to New York, Larry is met with a chauffeur, a hardworking but petite woman. Larry does not want her carrying his heavy luggage. Larry speaks with Seth Rogen about a possible guest role on the series now named Young Larry.  Seth decides not to work with Larry after a video of Larry physically wrestling with the chauffeur over carrying the luggage, surfaces on the internet.

Larry attends a rally for mayoral candidate Jimmy Mayhew, which Jeff’s wife Susie is involved in. It must be noted that this season has had the most peaceful and at times touching encounters between Larry and Susie.  During a table read for Young Larry, Maria Sofia gives an atrocious performance and Larry is determined to replace the wannabe actress.

The political rally allows Larry to befriend an unlikable city councilwoman named Irma Kostroski (played by HBO sitcom legend Tracey Ullman).  Larry learned city council can repeal ordinances. Now the bylaw for having a fence around pools has a chance to be overturned, and he could finally fire Maria Sofia without being sued by her extortionist father.

Larry later goes campaigning with Irma for Mayhew. While waiting in a perpetual line to vote, Larry speaks with a man who is voting for the other candidate and suggests that they just leave because their votes cancel each other. Larry, Susie, Irma and various others attend a gathering at Mayhew’s home and the results are announced in which he loses by one vote. Like clockwork, it revealed that Larry left the voting line.  Larry apologizes to Irma about the election and attempts to make amends by going on a dinner date with Irma. Larry and Irma have sex, which he does not enjoy. Irma reveals that she had not had sex in 13 years and is now absolutely infatuated with Larry.

Leon starts a service called “House Husband”. Women hire Leon to greatly reduce the amount contractors charge by having much less work performed, with the assumption (a dumb assumption) that tradesmen routinely do more work than necessary to inflate the cost of their work. Leon’s clients all suffer household failures related to the work they had contracted.  Notably, Irma falls down the stairs when the electricity shorts out and Susie’s bathroom floods water into her master bedroom closet.

Irma agrees to help Larry repeal the fence law. In exchange for the favor, Irma wants vaginal rejuvenation surgery. Larry helps an injured bicyclist on the street, pacing a sweater on the injured man to keep him warm. When an ambulance takes the injured man with Larry’s sweater on, he goes to the hospital to try to retrieve it.   While at the hospital, Larry speaks with a plastic surgeon about Irma’s possible operation and learns if she gets it done, she will not be able to have sex for six to eight weeks.  Larry is ecstatic. Irma is undecided about the surgery because of the amount of time afterwards during which she will be unable to have intercourse with her beloved Larry. Larry has Susie pretend that she has gotten the same surgery and recommends it.  After seeing Susie’s non-operated on vulva, Irma decides not to have the surgery. Despite the embarrassment, Susie decided to have the reconstructive surgery for herself. 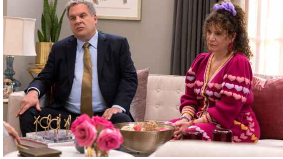 The shit hits the fan in the season finale.  Leon is shafted out of his trip to Asia with the latest Mary Ferguson.  This Mary (I lost count on the number of Marys) hid Leon’s passport and decides to vacation with a new enemy of Larry’s, one Mr. Vindman. Earlier in the finale’, Vindman overhears Larry’s call to another council member about the fence law and reveals to Larry that he will transcribe the conversation and send it to Councilman Weinblatt, thereby ruining Larry’s grand plan.   Depressed over her deteriorating relationship with Larry, Irma gets shit-faced at a bar and misses 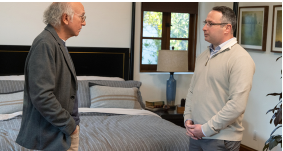 the council meeting. The vote to repeal the fence law is one vote short to repeal.

Larry attempts to intercept the transcription that Vindman left at Weinblatt’s home. He convinces Weinblatt’s elderly mother to let him into the house, and while she’s making tea, he scrounges for the document. Larry finds the document and daydreams about kicking Maria Sofia’s father off his set and firing the terrible wannabe actress. Then, he imagines Irma finally moving out of his house.  Larry attempts to flee the home in a panic when Weinblatt arrives.  Larry trips and falls into a pool, which of course, did not have a fence around it.

No word yet on whether or not HBO will renew Curb Your Enthusiasm for an unprecedented 12th season. It is not known if Mr. Larry David aims to return. But I would guess that there is a “pretty, pretty, pretty” good chance of a 12th season.