We have learned that Richard Lewis will make an appearance after all in the eleventh season of CURB YOUR ENTHUSIASM. The last time we commented on the dark-suited comedian, and Larry David’s long-running show for that matter, was back in February of this year. We stated then that Lewis was bowing out of the newest season altogether due to the multiple surgeries he has had.

That has changed and his health has apparently improved enough because he will be making a one-time appearance in an episode for his good friend David. He let us know he was stepping away earlier this year with a Tweet and, in his fashion, he Tweeted once again announcing his arrival on set to once again play a slightly skewed version of himself. Here is what he posted – 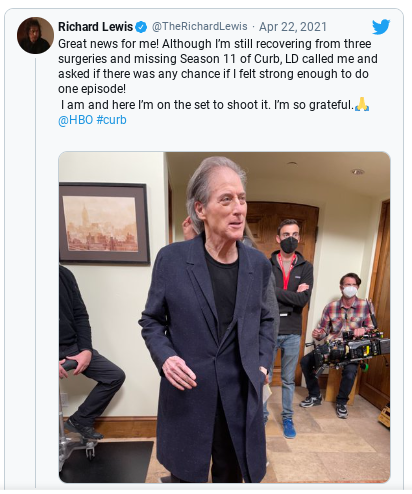 Fans of the show are surely equally grateful because Richard Lewis has always added an extra bit of snark to the show. Co-star JB Smoove, who has played Leon Black on the show since Season 6, showed his appreciation via a Tweet that said, “Hey Bud!! Wish I was working today! You look great!! Love ya!!”

Lastly, and this is straight from HBO’s own site here are a few comments made about Lewis and his place in the show:

Through the years Richard has received much kudos for his work alongside his buddy, Larry David. The New York Times commented that, “…not nearly enough of Richard Lewis, whose job is the hardest of all because his character must truly suffer and endure in a context where feelings are as anathema as M&M’s in a dentist’s office. Never upsetting the show’s distinct tenor of emotional apathy, Mr. Lewis here showcases his particular genius through a bout with kidney failure. He needs a new one, and oh, by the way, guess who isn’t donating?” The Los Angeles Times added, …”But it’s comedian Richard Lewis–himself famous for an act built on despair–who memorably sulks his way through a pair of early episodes as one of the few people in the business who can match David hang-up for hang-up, neurosis for neurosis…David and Lewis reluctantly help a blind man move furniture in his new apartment. It’s a classic.”

I know fans, you are happy to see his contribution to the season but I have to say, and you know I do, but…’curb your enthusiasm’, okay? Who knows whether his appearance will be major or a cameo or whether it will arrive early or late in the season, or, for that matter, exactly when the show will be before us? One thing I will put out there though, for Larry David to ask Richard if there was a chance that he could appear in the season, that moment had to be something special. We will just have to wait; hopefully, CURB will be available this Fall. So, welcome back Richard Lewis, we will be looking for you!