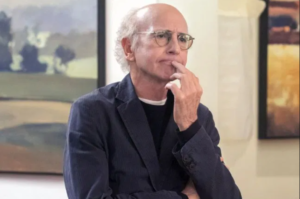 Whoever would have thought that there was yet another season of CURB.. in the offing? Apparently, Larry David has been spending time during self-quarantine to come up with a new concept for another season. Perhaps he satirizes the whole pandemic scenario in his not so lovable but laughable curmudgeonly way? Don’t out-rule it. Here is what we do know:

HBO has renewed the Emmy and Golden Globe-winning comedy series CURB YOUR ENTHUSIASM, starring Larry David, for an eleventh season, it was announced by Amy Gravitt, Executive Vice President, HBO Programming.  “This past season tapped into the zeitgeist in such an uncomfortably delightful way,” said Gravitt. “Larry is already brainstorming ideas, and we can’t wait to see what he has in store.” Adds Larry David, “Believe me, I’m as upset about this as you are. One day I can only hope that HBO will come to their senses and grant me the cancellation I so richly deserve.”

Originally debuting on HBO in 2001 and presenting 100 episodes to date, CURB YOUR ENTHUSIASM stars “Seinfeld” co-creator David as an over-the-top version of himself in an unsparing but tongue-in-cheek depiction of his fictionalized life. The series’ ten-episode tenth season debuted January 19, 2020 and brought back series veterans including Susie Essman (“Broad City”), Jeff Garlin (“The Goldbergs”), Emmy® nominee Cheryl Hines (“Suburgatory”), Richard Lewis (“Anything But Love”), J.B. Smoove (“The Millers”) and Emmy® winner Ted Danson (“The Good Place”).

The comedy series continues to prove how seemingly trivial details of one’s day-to-day life – a cold cup of coffee, a stained shirt, a missing toothbrush – can precipitate a chain of misfortune to hilarious effect. To keep the narrative spontaneous, the series is shot without a script and cast members are given scene outlines and improvise lines as they go.

Any good fan of the show knows the spiel and tone of the whole shebag and are eager to see what happens next. The series will, of course, take time to write and get before a camera but at least we know another season of CURB YOUR ENTHUSIASM is going to happen. Dare we thank Larry David for this? Best not, I think.