Though absolutely nothing has been mentioned officially by HBO it appears that HBO staple Larry David had a little something to say this week regarding CURB YOUR ENTHUSIASM. 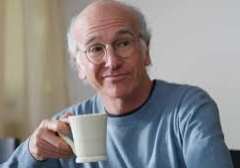 No, he doesn’t want to delete Season 11 and somehow shoot it over differently; that action is just reserved for his documentary. But Mr. David does want to think ahead to Season 12! During a TV Academy event for the Directors Guild of America (DGA) recently David confirmed that the long-running HBO series will be back for the 12th season.

The DGA, which is an entertainment guild that represents the interests of film and television directors in the United States motion picture industry and abroad, held an event Sunday, April 10 in which NFL Network personality Rich Eisen hosted. The event featured David, executive producer Jeff Schaffer, Jeff Garlin, Susie Essman, JB Smoove, Cheryl Hines and Richard Lewis. Eisen simply put the question to David and got an affirmative response.

You can only imagine that Larry David, scratched his balding head and mumbled out his answer proudly enough and surely did not make a grandiose deal about it. It just isn’t his style. Eisen also dropped a tweet regarding: 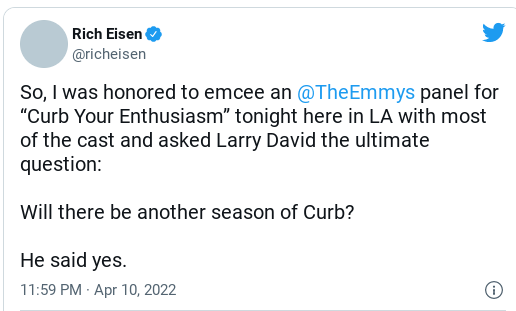 HBO & HBO Max chief content officer Casey Bloys said earlier this year, “As usual, if [Larry] has an area that he is excited about, we’ll do more. I imagine he will.” So, HBO is, of course, down for more CURB… as it is clearly an open invitation for Larry David and his grumpy, brooding persona to gather up the troupe and bring them back around for another go. Just how long we would have to wait for Season 12 is anyone’s guess. If you recall, there was a six-year gap between seasons 8 and 9. We don’t think the wait will be quite that long. However, David might want to get that retooled documentary out of the way first.

Man, it seems like we hold our breath every year for the announcement on whether this long-standing comedy series was going to tack on another season or not and every year that announcement arrives in a different fashion than the last one. It might not be an official statement but coming out of the mouth of Larry David at some little event is good enough for HBOWatch and fans of CURB YOUR ENTHUSIASM. Stay tuned.