This news can be chalked up to the notion that any news about any of HBO’s shows held in limbo due to the pandemic is news worth stating. It appears, due to health reasons, that Richard Lewis will not be a part of Larry David’s CURB YOUR ENTHUSIASM for the upcoming season, whenever that arrives. 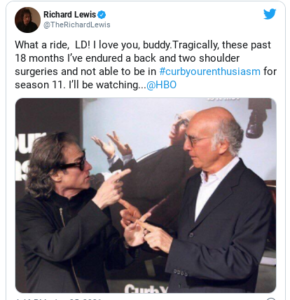 Hey, I looked it up, the guy is 73. He wasn’t keen on waiting for season 11 to get rolling so, he bowed out to continue healing. But since we are on the topic of this comedian you got to know he is no stranger to HBO. He did his self-deprecating routine for more than one Young Comedians special and Comic Relief fundraiser. He did his gig for HBO COMEDY HOUR; AN ALL-STAR TOAST TO THE IMPROV plus appeared in DENNIS MILLER LIVE, TALES FROM THE CRYPT and THE LARRY SANDERS SHOW. 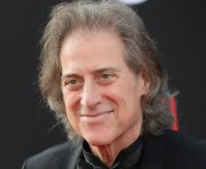 He has also had the recurring role as a variant version of his own self on CURB YOUR ENTHUSIASM since the premiere season back in 2000 as a good friend of Larry David’s. His last scenes were in the March 15, 2020 episode (the 9th episode of the 10th season) called “Beep Panic.” Though the episode, and the whole season, is focused on Larry little coffee shop called Latte Larry’s, a subplot has Lewis striving for a big meaty role to boost his career. He wants to show his range by playing an intellectually disabled character. But we won’t know just how that turns out, in the next season at any rate.

Surely, a part of the upcoming 11th season will be the rest of the usual troupe as Cheryl Hines, Jeff Garlin, Susie Essman and J. B. Smoove return. Keep your eye out for CURB YOUR ENTHUSIASM at some point (late 2021, perhaps?), but alas, without Richard Lewis.