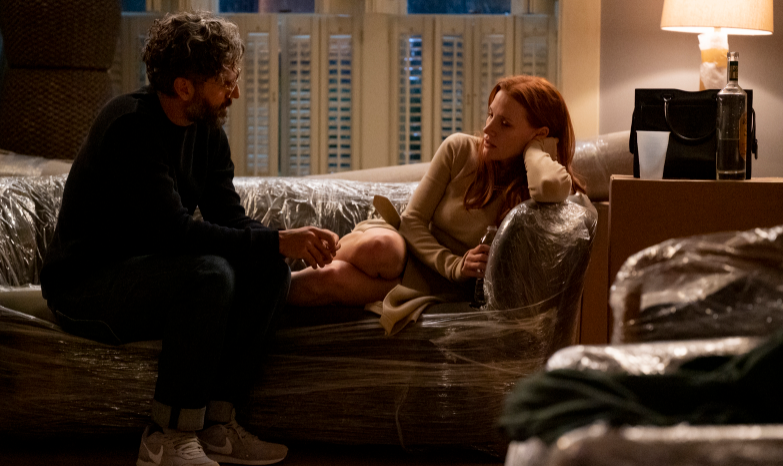 As with the penultimate episode of the six-episode Swedish Scenes From A Marriage, the five-episode American version’s penultimate episode is also the most tumultuous. Jonathan and Mira’s marriage goes to hell in a handbasket in “The Illiterates”, with a confrontation so severe it may have ruined any potential friendship.  Rarely has television so expertly captured the highs and lows of matrimony.

“The Illiterates” begins with a crafty tracking shot of Mira on a phone call exiting her vehicle and entering the home that she and Jonathan once shared. We see 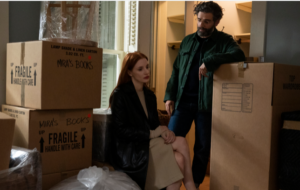 that Jonathan is on a call with a moving company. Their voices and movements in the finite space filled with moving boxes and crates are organized chaos. This opening scene would prove to be classic misdirection for those not familiar with the original series for it appears that the troubled bride and groom have decided to have a new start together. This is not the case. The divorce is going forward, but Mira is having second thoughts.

The tension of this episode begins with the outwardly nominal discussion of a couch. Mira has criticized Jonathan’s interior decorating skills in previous episodes, but now she wants the couch. Jonathan’s annoyance subsides (albeit briefly) after the couple has a moment on the couch that justifies the episode’s “Rated ‘M’  For Mature Audiences” rating. Unbeknownst to Mira, for Jonathan, it was not lovemaking -it was just sex. After the steamy encounter, Mira suggests that they go out to dinner. Jonathan is initially game however, he insists that they sign the divorce papers first. The embers that kindled during the couch argument have spread a wildfire of insults about their past and present transgressions. – Mira is a mediocre mom and Jonathan’s aversion to spicing up their sex life frustrated her. Mira is the one that wanted the divorce but now has a change of heart and mind. Etcetera etcetera.

Scenes From A Marriage sublimely executes a story that should make most people have empathy for both spouses. Most of this must be credited to the performances of the leads. Jessica Chastain and Oscar Isaacson are in all the scenes, and their strong presence negates the absence of a consistent supporting cast. Hagai Levi’s 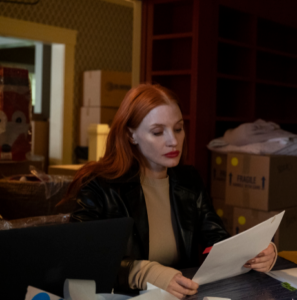 writing and direction allow us to mentally picture the main character’s interactions with offscreen characters; so much that Mira and Jonathan’s unseen partners feel like secondary characters. Proper adherence and deviation from the source material allow HBO’s version to honor Bergmann’s vision while crafting a story for a modern audience.

The question remains: Why does the person who wanted the divorce not want to sign the divorce papers? The answer is concurrently understandable and frustrating – Mira was fired from her job. Unsympathetic Jonathan resumes his insults, telling Mira that the sex was just sex, he does not have feelings for her, and that her firing does not make him have a morsel of pity.

The final 10 minutes of the episode has viewers of the original series and those only familiar with the American take on the same wavelength. We sense a physical altercation is about to occur. When Jonathan reveals that he may want to have another child with someone other than his soon-to-be ex-wife, Mira believes that it is punishment for her decision to have the abortion. Jonathan says that this is not the case, but states he is done talking. Jonathan is physically and mentally drained, and is desperate to leave the home. Jonathan moves for the key, and Mira pushes him and hits him. He shoves back. She returns the shove, and he hits her in the face. Mira throws Jonathan to the ground, and he hits his head on a futon. She throws books and other objects at him. Bloodied, they sign the papers on the floor. Jonathan coldly states, “Should have done that a long time ago.” This line is intentionally ambiguous. Should Mira have signed the papers a long time ago, or should he have hit her a long time ago?

The finale’ of Scenes From A Marriage airs October 10th on HBO at 9pm ET.