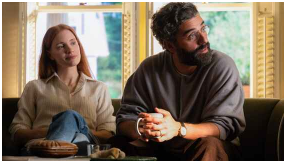 HBO has released its first teaser, trailer and images for SCENES FROM A MARRIAGE, starring Oscar Isaac (HBO’s “SHOW ME A HERO) and Jessica Chastain (Academy Award nominee for Zero Dark Thirty). Adapted from Ingmar Bergman’s classic Swedish miniseries and developed, written and directed by Hagai Levi (HBO’s IN TREATMENT and OUR BOYS), the upcoming limited series will debut September 12 on HBO and will be available to stream on HBO Max. SCENES FROM A MARRIAGE re-examines the original’s iconic depiction of love, hatred, desire, monogamy, marriage and divorce through the lens of a contemporary American couple.

Now, I don’t claim to be a Bergman expert, though I have watched his work and his 1973 Scenes From A Marriage. Levi must have watched it as well, because even I noticed, as did a number of commenters on the internet, that the above teaser very much seems to match Berman’s cinematic style; namely, extreme closeups. It could be debated, and just might be on HBOWatch upon this limited series’ review, that Ingmar doesn’t need retold. HBO, always being bold, hasn’t shied away from such talk and coming in September we get to witness the life & death throes of a marriage from Levi channeling Bergman. It is more evident, of course, in the longer trailer below:

For those not quite up on this work, the original piece was a 1973 Swedish miniseries from the auteur Ingmar Bergman starring his paramour Liv Ullman and Erland Josephson. The six-part film spans the life of the couple over ten years. The miniseries was later truncated into a theatrical film. As we stated, that movie is available to view for subscribers on HBO Max. 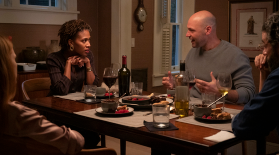 This retelling will keep up with the original by cross-examining the emotional arcs of an unstable marriage. Joining Chastain and Isaac in the work are Nicole Beharie, Corey Stoll (both pictured, right), Sunita Mani and Tovah Feldshuh. An official press release states –  A captivating re-examination of the dilemmas probed by the original, the five-episode limited series explores love, hatred, desire, monogamy, marriage, and divorce through the lens of a contemporary American couple. Mira (Jessica Chastain) is a confident, ambitious tech executive left unfulfilled by her marriage, and Jonathan (Oscar Isaac) is a cerebral and accommodating philosophy professor desperate to keep their relationship intact. Throughout, SCENES FROM A MARRIAGE mines the full complexity of Jonathan and Mira as individuals who ultimately know their marriage isn’t being torn apart by any one event or flaw, resulting in a radically honest series that allows the audience to eavesdrop on private conversations between two people torn between feelings of hate and love.