With each episode so far, we’ve been given a little peek into the behind-the-scenes action. Not only does it give us a taste of what the production of the show looks like, but we get to see Mira (Jessica Chastain) and Jonathan (Oscar Isaac) flip the switch and watch them seamlessly transition into acting mode. It’s been a cool addition. But especially getting further into the series, I absolutely need to add the original to my watch list because I would love to really in-depth compare the two. Especially knowing a crucial difference, to be discussed later, I really would love to analyze the two side by side. But for now, let’s dive into episode 2, “Poli” and what our married couple has or doesn’t have to say. 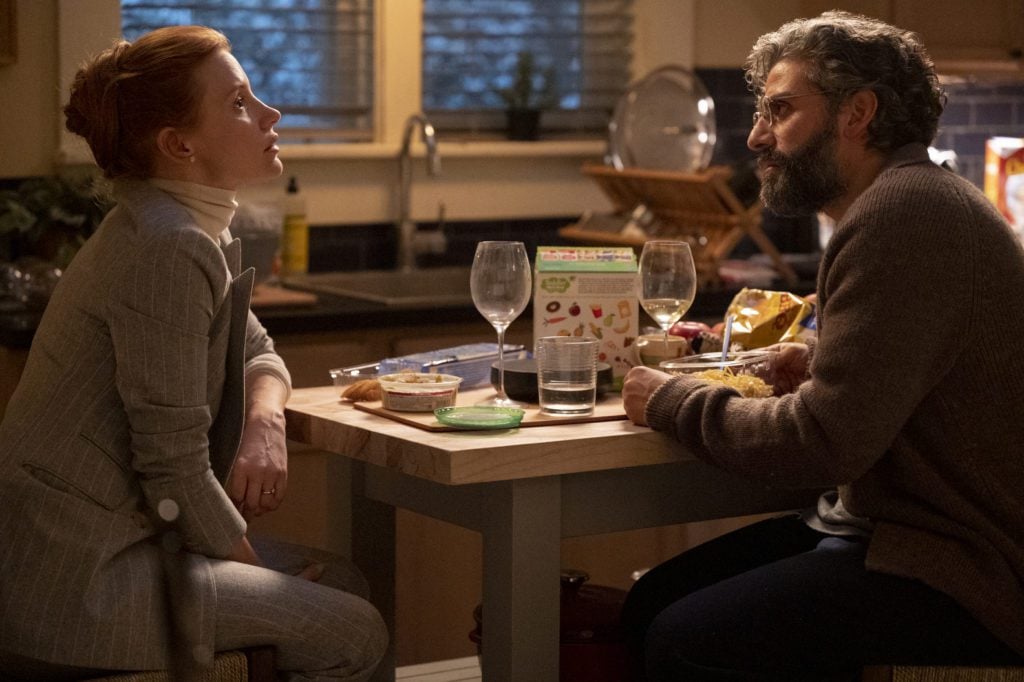 We start with Jonathan at home with Ava (Sophia Kopera).  It’s snowing outside, wintertime. He seems listless, walking through his house not really sure what to do with himself. But he’s clearly lonely, seeking out internet viewing for sexual release. Isn’t he lucky Mira didn’t walk in just then? I mean, you guys have plenty of awkward things to talk about, we don’t need to add to the pile. “How do you know she’s gonna be here?” Ava asks dad, and what powerful foreshadowing that was. When Mira does arrive early, she’s clearly detached. Jonathan expects her to still be mad at him regarding a home renovation argument. And since it was “her project” it’s easy for him to push off on her. Let me ask, Jonathan if it’s your wife’s decision and project to finish when do you think that will actually happen? This career-driven wife of yours doesn’t seem inclined to pick up on home reno at the moment. In fact, she doesn’t seem inclined to want to be here at all. Then, of course, the shoe drops.

We get the perspective that the abortion was around 8 months ago, and they have been struggling. Mira admits to being unhappy and needing to breathe. She gets a breath of fresh air, only it’s with someone else. And she fell in love. Well, f*ck. This is the major deviation from the original in which it is the husband who is unhappy and has an affair.  “You didn’t feel anything?” “No.” “Well, that right there might be a sign of something, I guess.” Of course, Jonathan wants to talk and work through this. He wants details, he wants to understand. Unfortunately for him, she’s already made up her mind. He wants to fight for them, but she’s already tapped out. In fact, she tapped out a long time ago. Even before the abortion, which was something vaguely noticeable in episode 1 and how they interact with each other. At one point, she calls him “honey” and I wanted to smack her. You don’t get to use terms of endearment after telling your husband you f*cked someone else. The bedroom scene was shot for 20 minutes without cutting. This technique has led to some of my favorite HBO scenes, including Matthew McConaughey’s drug raid in season 1 of True Detective. It builds the tension well, especially with the amazing chemistry between Chastain and Isaac. 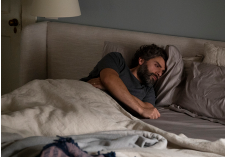 Jonathan tries to get her to see some perspective. To think about her daughter, and what this will do to Ava. “If I don’t leave right now, I’m never going to.” Mira is rushed and panicky in her attempts to not only discuss the affair but also to leave the house. She doesn’t want to be there, it’s obvious. Even leaving her wet hair tucked in her turtleneck was probably the most uncomfortable part of the whole episode to me. I have long hair and when it is wet, I do NOT want it in my shirt. But she’s only focused on getting out, she doesn’t have the time. And that’s what Jonathan is asking for. For the time for them to work this out. You can feel the tension in Jonathan just wanting to touch her, to be with her; hoping that if they can reconnect in some way he can save things. Even after admitting she doesn’t find him attractive anymore (ouch to the extreme, Oscar Isaac is rocking hot daddy in this show IMHO), he just wants to hold her and hope that she’ll hold him back. But she can’t. She doesn’t want to be touched by him anymore. She flees and Jonathan is left trying to piece it all together, including reaching out to Peter (Corey Stoll) and Kate (Nicole Beharie) who knew something was going on. Poor Jonathan. So of course, Ava wakes up and …who isn’t there?

(Due to glitches on HBO.com we are not able to embed the following Scene Study; hit the link to view.)