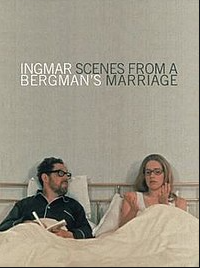 With the HBO-produced reinterpretation of the late Ingmar Bergman’s Scenes From a Marriage was first announced, I immediately contacted HBOWatch’s fearless editor to voice my excitement. Ironically, I had not viewed Scenes From a Marriage, but I was a fan of Bergmann Persona, The Seventh Seal, Cries and Whispers, Fanny and Alexander, and Wild Strawberries. All these superb films can be seen on HBOMAX, yet I viewed these works from The Criterion Collection’s 30-film Ingmar Bergman Blu-ray set.

Two versions of Scenes From a Marriage exist: 1).  281-minute six-part miniseries  2).  167-minute theatrical release.  The latter cut is available on HBOMAX, and it is no less impactful than the full version. It is merely a matter of preference on how long one wants to view this insightful film about relationships. Relationships. My relationship with my wife changed upon my return from a tour in Afghanistan. We are now separated, yet, remain best friends and co-parent our two children. None of the evident reasons (infidelity, insecurity, maltreatment) were present. She just wanted to take a road not yet traveled. Poignantly, having experienced the highs and lows of marriage, Scenes From a Marriage burns in the synapses of my mind, more than Bergman’s other acclaimed works.

Scenes From a Marriage’s superb dialogue, camera blocking and tour-de-force performances from the two lead performers make it a near-flawless work.  However, I believe that it was the real-life relationship of Berman and female lead Liv Ullman, that elevated the already stellar material. The previous five-year relationship of the former couple (they never married) was the model for the 10-year relationship between Johan (Erland Josephson) and Marianne (Ullman). The first episode features a couple’s dinner where a noticeably troubled couple, both laud Johan and Marianne’s marriage, while openly and unapologetically decrying their own. Unbeknownst to this self-deprecating couple, Johan is having an affair, despite being deeply in love with Marianne. The mentioned scenario above is seemingly mere standard melodrama; however, this work is a deep study of intimacy, chance, circumstance, and time.  Over time (five episodes in this narrative), intimacy, chance, and circumstance all change. Sometimes for the better and sometimes for the worse.  The arguments and joys of the couple are never repetitive or dull; Scenes From a Marriage is the 2001: A Space Odyssey of personal dramas. 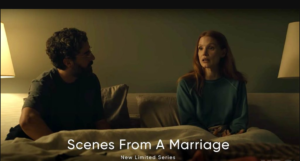 What do I expect from the American interpretation of this classic?  I expect writer/director Hagai Levi (HBO’s In Treatment & Our Boys, Showtime’s The Affair) to not make this a mere remake. Levi is talented and astute enough to know a true reexamination of the source material is needed. The modern setting may tackle the influences of social media and technology while bringing forth the effects of divorce on children. Johan and Marianne had children in the original, however, they are rarely seen. My speculation of things to come from HBO’s take on the material; is indeed mere speculation. Yet, I am certain HBO and Hagai Levi will do justice for one of Bergman’s crowning achievements.

(Editor’s Note: An adaptation of this Ingmar Bergman classic that re-examines the show’s iconic depiction of love, hatred, desire, monogamy, marriage and divorce through the lens of a contemporary American couple is now in production with Oscar Isaac & Jessica Chastain.)