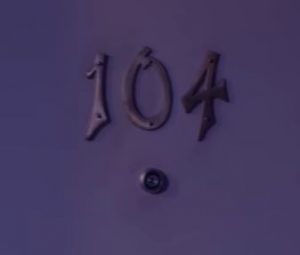 Here now is our take on Episodes 3 & 4 of the anthology series ROOM 104. Go ahead, knock on the door because you can never tell who is inside.

The what? It is a brand of single malt Scotch whiskey  (ah, for a drink of that right now) if you take an ‘o’ off the end but other than that you got me. And therein lies the mystery. Well, it all has to do with a woman seeking salvation. She is visited by a cult priest promising to help her do just that very thing. She wants to transcend. Good luck with that. She is Deborah, played by Sameerah Laqmann-Harris; she could pass as a younger Alfre Woodward. The priest is Samuel, played by Orlando and they set the mood for a religious epiphany in Room 104. 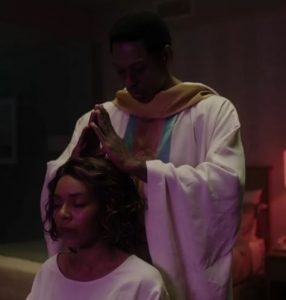 re both members of an undescribed cult. She has followed online disciplines but was ready for a face-to-face experience to take her to a higher level. That is where Samuel comes in. Room 104 is that neutral space and there they get into the appropriate grab and prepare to “transcend” her. Ah, she had to down liquor and 7-Up to calm her nerves first. Get it? Jones used to shill the un-cola in ads. He is also no shilling religious experiences or so it seems. In a tweak of humor here he relaxes her and gets her to open up to pivotal moments in her life and it takes a while for her to find one. To assist her in his quest is a series of DVDs Samuel plays in the room’s provided console. In another twist of humor, those lessons are presented by the character Father, played by Tony Todd in real cheesy dated moments complete with a Casio keyboard.

But let’s get to the nitty-gritty. Deborah finally recounts a traumatic experience from her youth in which a classmate led her over a bridge to a secluded shack in order to show her a rare bird called a Knockandoo. Really what he exposes her to is his penis and she hit it with a rock before running off. Feeling bad about that experience she goes back the next day to make amends and meets a man named John Knockandoo who also wants to show her his penis and what it can do.

Supposedly working her way through this trauma will aid her in transcending but Samuel says she is blocked and needs one further step to make it happen. The half-hour up to this point has given us a dramatic story of Deborah’s past interjected with odd humor but in the last minutes the real shock of the story plays out. Samuel is out to release the pressure that Deborah has to achieve and in involves straddling her and penetrating her nasal orifice with a probe. It is during the onset of that practice, complete with flashbacks of genitalia that she transforms or transcends or has an epiphany or whatever and let’s just say Samuel gets the brunt of her new found awareness and in exactly what way is left to your interpretation.

One should be careful of the clarity one seeks. Feel free to discuss below.

Okay, this installment only has two characters. First is Daniel who is the bearded guy we see curled up on one of the beds with his Apple laptop. We learn from the description that he seeks advice about his marital troubles from a long-lost friend. That friend is Patrick. Are they just e-mailing? Clearly, a face-to-face visit will occur. We also have one more tidbit of info and that is the title – “I Knew You Weren’t Dead.” The question here lies with who is referring to whom? Is Patrick surprised to hear from Daniel because he thought the worse for him? Or perhaps the last time these old friends met Patrick wasn’t so healthy? We don’t know more than that at the beginning. And then the 27-minute story unfolds. 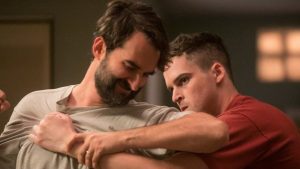 Daniel (co-creator Jay Duplass) is holed up in Room 104 because his marriage is done for and he needs his best friend since childhood to help him sort it all out. He looks at images of Patrick (Will Tranfo) on his device but falls asleep shortly after. Next thing you know Patrick is in the room and they talk like old times. A dream? We are given a few moments to wonder. Daniel wakes up to sounds in the bathroom and again there is Patrick. They settle in to talk some more but instead of Daniel getting advice he gets berated by Patrick for not saving his life when he was 21.

Wait, the title says “I Knew You Weren’t Dead” – it appears that Patrick is physically indeed dead just not in Daniel’s mind. I won’t go into how Patrick dies but know that Daniel witnessed it. They tussle in anguish and Patrick is gone again. We are given yet a few more moments to wonder where this goes next. Daniel sleeps again only to be woken yet again by Patrick. This time the actor Frank Ashmore plays him because in Daniel’s mind he wished his friend had lived to a ripe old age. There is unfinished business between these two.

It is not a spoiler to say where this story ends. There needs to be understanding, tears, apologies and forgiveness. What makes it all work is the way this brief story is executed. Even the moments of silence hold substance. This series has given us thrills and horror but now hits us with a heartfelt moment that left me in a moment of silence after it was done. ROOM 104 keeps me intrigued and engaged. You?