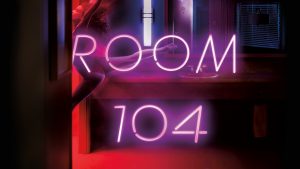 It is time. The portal that allows us to peer into that little motel room that is Room 104 is here for another season and you can be sure that what happens behind that door could be just about anything. Last season we learned of the ‘knockandoo’ met the likes of the ‘missionaries’ and ‘Boris’ & went inside the ‘red tent.’ Before we move on to Season Two and to sort of set the mood for this off-beat anthology series here is a look back at Season One.

Okay, sorry about that but the new season is bound to be just as odd as Mark & Jay. Here are some Season Two details: “The banal” can be a most interesting place – if you stop and take a look.

Telling tales of the characters who pass through a single room of a typical American chain motel, the anthology series ROOM 104 begins its 12-episode second season FRIDAY, NOVEMBER 09 (11:30pm-12:30am ET/PT), debuting two episodes back-to-back, followed by two new episodes subsequent Fridays at the same time, exclusively on HBO. From creators and executive producers Mark and Jay Duplass, the show tells a different story of the assorted characters who stay in the room in each episode, ranging from dark comedy and horror to poignant drama and musical romance. Filled with twists and surprises, ROOM 104 offers a new discovery from one episode to the next, telling tales of everyday people striving for connection and meaning inside a single room.

Well, all kinds of wild things are going on. So, let’s get into ROOM 104 because we’ve got two episodes to look at each week.

It helps to know what that acronym stands for. FOMO = “fear of missing out or anxiety that an exciting or interesting event may currently be happening elsewhere without you.” In this episode, three friends take a weekend trip to celebrate Grace’s 30th birthday. The celebration takes a turn with the arrival of her uninvited sister.

The characters are the birthday girl Grace (Charlyne Yi), her BFF’s Tanya (Pia Shah) & Matty (Tom Lenk) who are eventually blessed with the presence of Karen (Jennifer Lafleur). Grace, Matty & Tanya are holed up in room 104 to celebrate Grace’s birthday complete with ganja, music and comfy clothes. They are the best of friends having a great time; so good a time that the obligatory selfie is in order. Grace doesn’t want to post it on social media though because she doesn’t want a certain someone to see it posted.

With that Matty & Tanya finally wonder where Grace’s sister Karen is? Well, it is revealed that Grace didn’t invite her because she is such a downer. They are glad for that and a good laugh or two is had at her expense. A knock at the door has them hoping that the pizza has arrived but instead it is Karen. She has tracked the party down. Needless to say, the moment gets quite awkward and uncomfortable. It is a bit tough to play it cool while high but the trio gives it a try and fail. As for Karen, she has had a FOMO moment. The rest of the episode has us witnessing how she handles it. 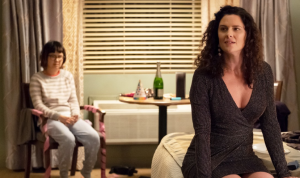 Well, she roughly comes on to Matty who is gay and totally pisses off Tanya and makes Grace just feel small. All this leaves Karen laughing hysterically on the floor. As a result, Tanya storms out and Matty has a rough fall off of his high thus heading to the shower. This leaves Grace & Karen to deal with their issue. It doesn’t end well at all. Karen is full of anxieties over being excluded and Grace isn’t so hot on the way she is treated either.

If you think I’m going to reveal what happens from here on out your crazy. None of my ROOM 104 reviews will reveal all the truths. You got to watch it for yourself. But I will say that there is only one person left triumphant in the end. Does Grace put Karen in her place for her rude behavior? Does Karen wreak havoc in her anger? Do the BFF’s stick by their girl? Who takes the final selfie of the weekend in room 104? “FOMO” is a fine start to the season.

Jim reunites with his third-grade teacher, Mr. Mulvahill, and challenges him to admit to an incident from the past that left Jim forever changed. 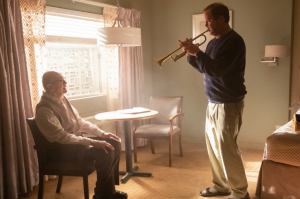 Sometimes it is just going to be difficult to dance around the plot without revealing spoilers. This episode is a case in point because I don’t really want to reveal just what the incident that is the crux of this story is nor do I want to reveal the story’s end. So, what can I tell you?

The episode has a cast of two. Rainn Wilson plays Jim who has rented room 104 and made arrangements for his third-grade teacher Mr. Mulvahill, played by Frank Birney, to visit. Jim is quite anxious about the meeting and rises early on the day of the visit. He plays Beethoven’s “Ode To Joy” on his trumpet. He arranges items around the room the way he wants them and is interrupted by a knock at the door. Mr. Mulvahill has arrived.

We learn in a conversation that Jim wants Mr. M. to remember a tumultuous incident that happened one day in music class back in the day. Mr. M. is cordial and kind but can’t remember anything of significance. But Jim is persistent. He gives us a great rant about the day in music class when the students were introduced to “Ode To Joy” a moment that stuck with Jim. It stuck with him so much that he plays it in front of the now elder Mr. M. But that is not the incident Jim wants Mr. M. to remember. It was afterward when Jim was alone with Mulvahill that impacted him ever since. Mr. M. placed his hand on Jim’s knee and tells him how glad he was that he embraced Beethoven and then he…changed Jim’s life.

Now in this day and age, we might think of where this story is going. Again, I won’t reveal what happened when they were alone. But, once Jim refreshes Mr. M. memory of the matter the rest of the episode deals with Jim forcing Mulvahill to remember & to confess. It escalates quite quickly when Mr. M tries to leave. A 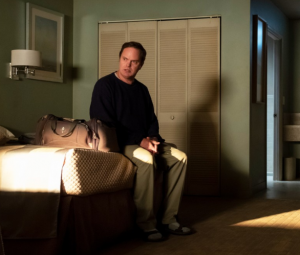 trumpet case to the head stops him fast and when he comes around, he is shackled to a chair that sits by the main window. What transpires is yet another intense moment as Jim threatens bodily harm if Mr. Mulvahill does not confess to the deed.

Does he confess? How does he get out of this hostage situation or doesn’t he? And what of Jim? Does he get the satisfaction he was after? Does he get his moment of  “Ode To Joy?” You will only know if you watch the second episode of ROOM 104.