The Winds of Winter are coming…  just kidding!  Who knows when book six in the Ice and Fire saga will be released (there, there don’t cry sweet summer child)– it could be this year, it could be two years from now! But thankfully the author is keeping us occupied with an interim installment called “The World of Ice and Fire“.

Check out the glorious cover which George revealed just today: 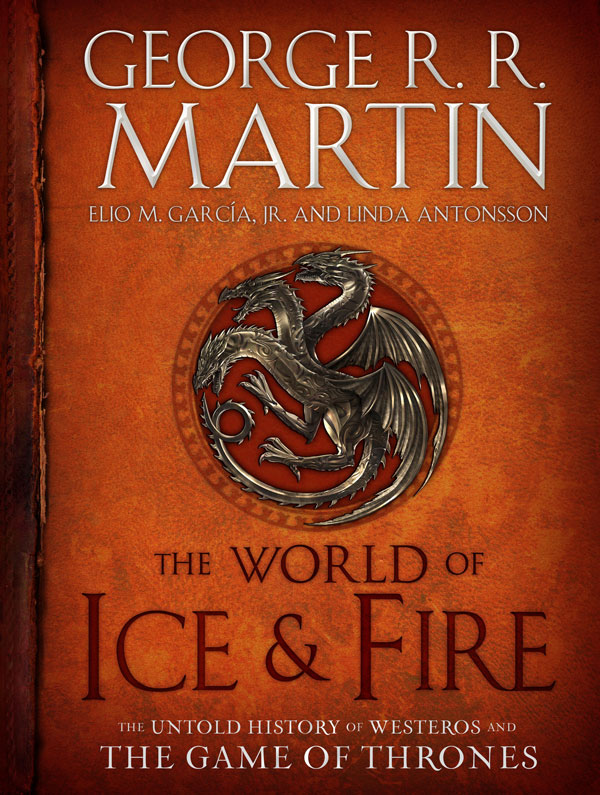 Here’s the description from Amazon:

If the past is prologue, then George R. R. Martin’s masterwork—the most inventive and entertaining fantasy saga of our time—warrants one hell of an introduction. At long last, it has arrived withThe World of Ice and Fire.This lavishly illustrated volume is a comprehensive history of the Seven Kingdoms, providing vividly constructed accounts of the epic battles, bitter rivalries, and daring rebellions that lead to the events of A Song of Ice and Fire and HBO’s Game of Thrones. In a collaboration that’s been years in the making, Martin has teamed with Elio M. García, Jr., and Linda Antonsson, the founders of the renowned fan site Westeros.org—perhaps the only people who know this world almost as well as its visionary creator.Collected here is all the accumulated knowledge, scholarly speculation, and inherited folk tales of maesters and septons, maegi and singers. It is a chronicle which stretches from the Dawn Age to the Age of Heroes; from the Coming of the First Men to the arrival of Aegon the Conqueror; from Aegon’s establishment of the Iron Throne to Robert’s Rebellion and the fall of the Mad King, Aerys II Targaryen, which has set into motion the “present-day” struggles of the Starks, Lannisters, Baratheons, and Targaryens. The definitive companion piece to George R. R. Martin’s dazzlingly conceived universe, The World of Ice and Fire is indeed proof that the pen is mightier than a storm of swords.

Don’t kid yourselves– you’ll be ordering this immediately.  Your collection will not be complete, and your maestery of the world of Westeros may be called into question if you do not partake in this new knowledge. Do not let the cover deceive you; this thing is going to be MASSIVE!  Martin described it thusly:

“…a big coffee table volume with lots and lots of stunning artwork, and tons of fake history.  We were supposed to provide 50,000 words of text, but… ah… I got carried away.”

Are you ready to impress all the ladies (the cool ones anyway) with this massive tome in your living room? The book has a release date of October 28th, 2014. If you’re desperate you should check out The Lands of Ice and Fire, a map companion book which you may have missed.