“Rethinking Game of Thrones” is a new series of articles by longtime fan Jonathan R. Meyers in which he reevaluates characters, scenes, themes and events in Game of Thrones in the context of the entire 8 seasons with a view towards better understanding and appreciating the third act including the final season and the ending.

The “fourth wall” is a concept in movies, plays, TV shows or other media that basically implies that there is an invisible wall, like a one-way mirror, between the viewer and the entertainment media. The viewers (that’s us) are watching a world in which the characters don’t know that we the viewers exist. The unspoken rule of the fourth wall is that the characters interact with each other and their world but not with the viewers. However, sometimes for either dramatic, humorous, or creative purposes, the fourth wall is “broken” meaning a character in the show, movie or play will speak directly to or otherwise acknowledge and address the audience. For those familiar with 1980s teen movies, you might remember Ferris Bueller talking directly to the audience about his day off in the eponymous movie. Or you may remember when, in the movie Sixteen Candles, “The Geek” played by Anthony Michael Hall turns directly to the camera (to the viewer) and says “this is getting good”. More recently, the comic book character played by Ryan Reynolds speaks to the audience in both Deadpool and Deadpool 2.

Though no character in Game of Thrones makes eye contact with the camera, acknowledges the audience, and fully breaks the fourth wall as in the previous examples, there were three scenes when a character, though addressing another in the show, speaks in the direction of the viewer and delivers a key statement that seems clearly meant to inform the audience. Notably, the lines spoken during these arguably fourth-wall-breaking scenes predict or provide context for the still often misunderstood ending of Game of Thrones, where people’s hopes and expectations for their beloved characters clashed with a reality that two of these three scenes should have prepared them for.

The first such scene, which takes place during Season 3, features the sadistic Ramsey Snow torturing Theon Greyjoy. Though Ramsey is speaking to Theon, the camera uses Theon’s perspective so the following line informing Theon that any hope for a better outcome is futile is directed to the audience: “If you think this has a happy ending, you haven’t been paying attention.” The meaning for the audience should be unmistakable. Though this is before the Red Wedding, there was ample indication that death, horror, and tragedy are the norms in Game of Thrones. We experienced the execution of Ned Stark, the assassination of Renly Baratheon, and numerous other horrific events that should have prepared us for a finale that would dash our hopes. Season 3 seems like a lifetime ago and we were just sweet children of summer then, likely believing that all the suffering we witnessed would lead to evil being vanquished, justice being restored, and our favorite character on the Iron Throne. But Ramsay, speaking like a narrator and nearly breaking the fourth wall, was telling us quite directly not just that there was more suffering and tragedy to come but, in plain terms, the show would not have a happy ending. Based on some viewers’ reactions to the ending, clearly, more of them should have been paying attention. 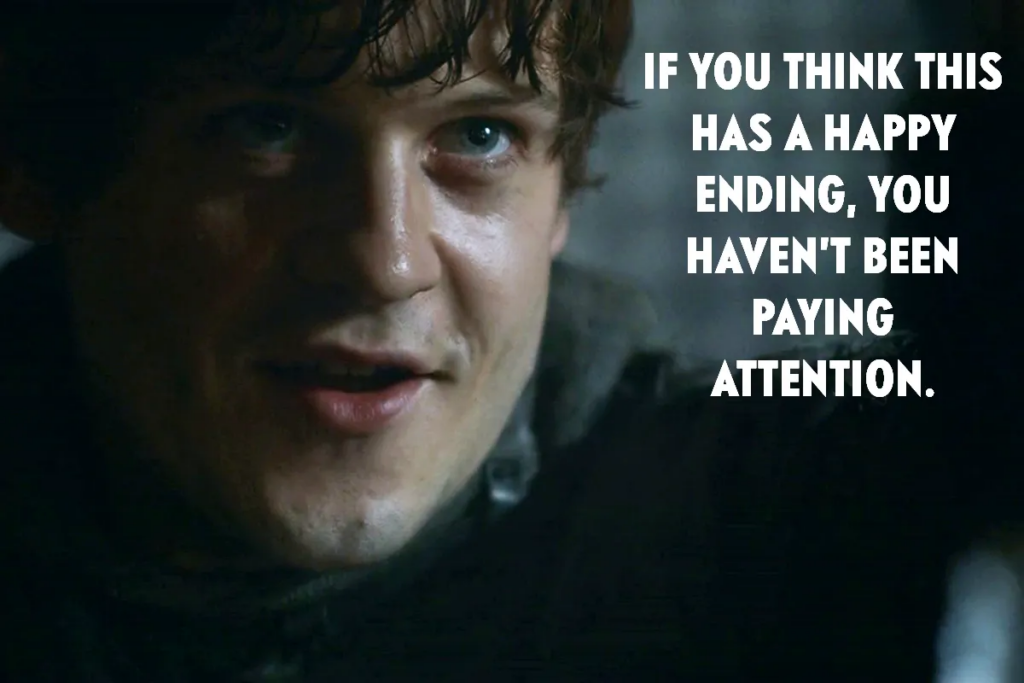 But consider that many of us grew up with television shows where good conquers evil and heroes are rewarded. Massively popular and beloved worlds from our youth like Star Wars follow this general framework. This is the nature of the stories we have consumed and just endings to such stories are what we subconsciously expect. So in case, we needed another reminder that justice and fate in Game of Thrones, like in our own world, may not be fair, in Season 6 Jaqen H’ghar provides the following guidance to the audience:

“Does death only come for the wicked and leave the decent behind?” Though he is addressing Arya Stark, then in training to be a faceless man and being given her first assassination assignment, Jaqen H’ghar, alone in the shot, is also addressing the audience in case they forgot Ramsey’s words and haven’t been paying attention. This is Game of Thrones, no one is safe, nothing is necessarily fair or just, and having expectations based on one’s degree of decency for who lives and who dies or who sits on the Iron Throne is unreasonable, and clearly contraindicated by our own experience watching the show. 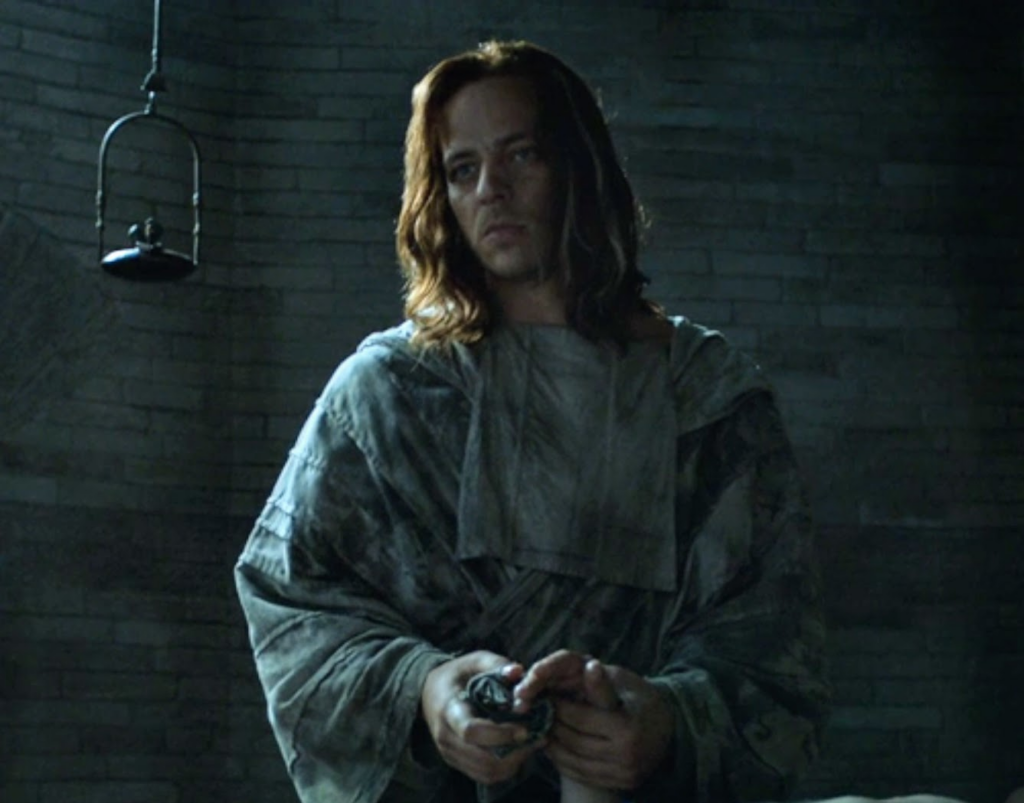 Forewarned is forearmed, but for those who made the aspirations of the main characters their own, or hoped that someone who is good, honorable, and deserving would rule the Seven Kingdoms, the finale dashed those hopes. Though Ramsay Snow and Jaqen H’ghar warned us, most viewers likely took their fourth wall bending statements as purely internal dialogue. Now that the finale made clear there would be no happy ending and death came for the decent and the actual wall in the north was broken, we get one last soliloquy from Tyrion: “What unites people?… Stories. There’s nothing in the world more powerful than a good story.” While not a warning as to how we should expect the story to conclude (having already arrived at the conclusion), Tyrion’s words to us present an overarching theme and are self-referential. In essence Game of Thrones is a tragedy rather than a fairy tale and we are reminded by Tyrion that what matters is not who vanquished whom or who won the right to rule, but that the shared experience of a story brings everyone together. Indeed, Game of Thrones is sometimes considered the final example of “appointment television”. Born before the rise of binge-watching and soaring to the heights of popularity as scheduled must-watch TV while on-demand streaming became the norm, Game of Thrones provided one of the few if not one of the final shows that everyone watched together; a story that united people in a collective experience. The writers and likely, George R.R. Martin himself (who I believe identifies with Tyrion to some degree), tell us through Tyrion’s near-fourth-wall-breaking speech, that we’ve been on a journey and however we feel with its resolution, the story affected us and bonded us together as we communally experienced this epic tale.

As we rethink Game of Thrones and reconsider the ending in the context of the whole story, we are about to begin another powerful tale set hundreds of years before Game of Thrones and we should remember that if we think that story has a happy ending, we haven’t been paying attention.