“Rethinking Game of Thrones” is a new series of articles by longtime fan Jonathan R. Meyers in which he reevaluates characters, scenes, themes and events in Game of Thrones in the context of the entire 8 seasons with a view toward better understanding and appreciating the third act including the final season and the ending.

The Inspiration of The Odyssey, Part 1 of 3 – Settings & Themes 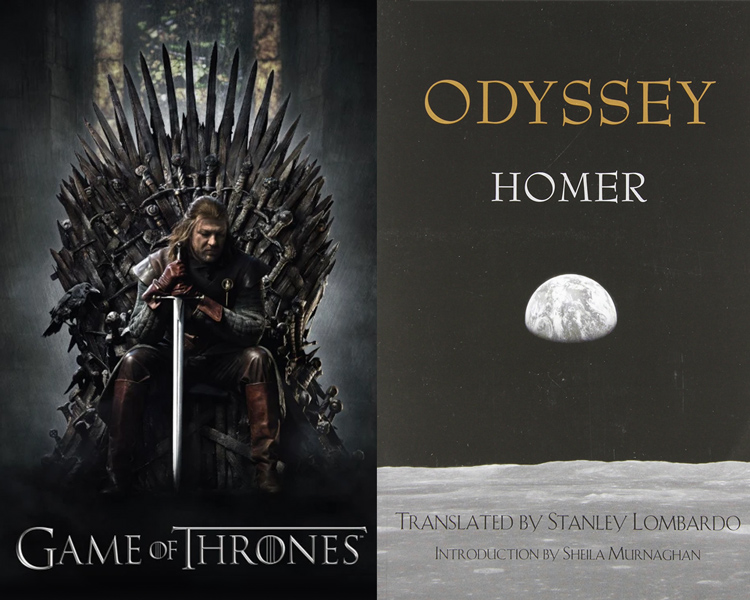 Game of Thrones is a beautiful, epic tragedy with themes, symbolism and story-telling techniques that can be appreciated at deeper levels, especially after multiple viewings.  Experiencing the intricate layers of Game of Thrones motivated me to read other epic stories, particularly those which inspired the author to write and showrunners to produce Game of Thrones.  George R.R. Martin has made no secret that his characters and plot lines are inspired by historical events like The War of the Roses, fiction like The Lord of the Rings, and classic stories from ancient times.  One of the most famous works of the ancient Greek period is The Odyssey by Homer. There is little doubt Martin is familiar with The Odyssey, in fact, one writer recently referred to Martin as “The American Homer” and noted several descriptive lines that Martin has written in his novels that closely mirror lines written in The Odyssey. (1)

After several viewings of the 73 episodes of Game of Thrones, reading the Stanley Lombardo translation of The Odyssey, participating in a 12-week Odyssey discussion course, and chronicling it all in a Twitter thread, I have created a series of three articles to draw parallels and comparisons of themes, scenes, concepts, characters, and qualities between The Odyssey and Game of Thrones.

Part 1 deals with settings and themes, while Part 2 (out next week) features lines from The Odyssey that immediately evoked something specific in Game of Thrones, represented in the article by images.  Part 3, to be published in a few months, compares the similarities of the endings of The Odyssey and Game of Thrones in terms of both the story and public perception.  Part 1 – Settings & Themes appears below: 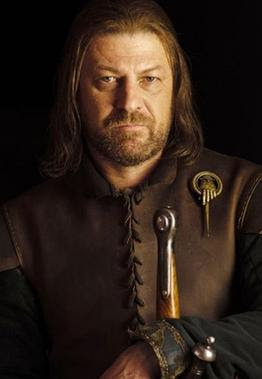 The world state of both The Odyssey & Game of Thrones is heavily influenced by an epic recent war involving the sacking of a major city. These wars loom large over the setting and have determined where characters currently are geographically and mentally as each story begins, and created the conditions for the challenges the

characters encounter as the stories evolve.

In The Odyssey, the story centers around the hero King Odysseus, a key figure in the Trojan War who is credited with masterminding the sacking of Troy.  The early chapters (or “books”) of The Odyssey feature Odysseus isolated and struggling after a war which is responsible for both his status as a hero and his difficult circumstances.

Similarly, Game of Thrones Season 1 focuses on the protagonist and patriarch Warden “Ned” Stark who was a key instigator and hero of the great war known as Robert’s Rebellion which led to the sacking of King’s Landing.

Like Odysseus, Ned’s heroic legacy and current stature, the status of the characters and the world he occupies, as well as his increasing isolation are all the result of the aftermath of this great war.

Additionally, while both cities faced formidable armies, the fall of Troy and of King’s Landing took place not as the result of superior overwhelming force, but of trickery. Troy fell after the city accepted the Trojan Horse whose occupants opened the city gates, and King’s Landing fell when Grand Maester Pycelle convinced King Aerys, against all other advice, to open the gates of King’s Landing.

In each case, a trick convinced the reigning king to open the city gates which welcomed in an invading army who then sacked the city. Though not relevant to the actual stories, I would be remiss if I didn’t note the connection that Ned Stark in Game of Thrones and Odysseus in the 2004 film “Troy” (about the Trojan War and events immediately prior to The Odyssey) were both played by the same actor– Sean Bean. 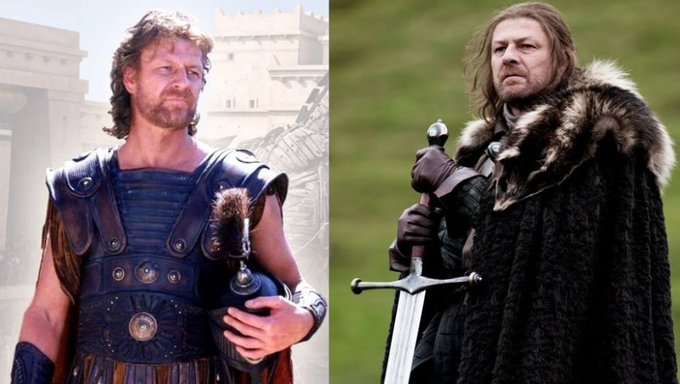 Sailing Home to Regain the Throne (Nostos)
“Nostos” meaning “homecoming” is a theme in Ancient Greek literature commonly involving a hero returning home by sea after a long absence. Nostos is widely recognized as a prominent theme in The Odyssey in the form of the hero Odysseus sailing home in order to reclaim his throne. 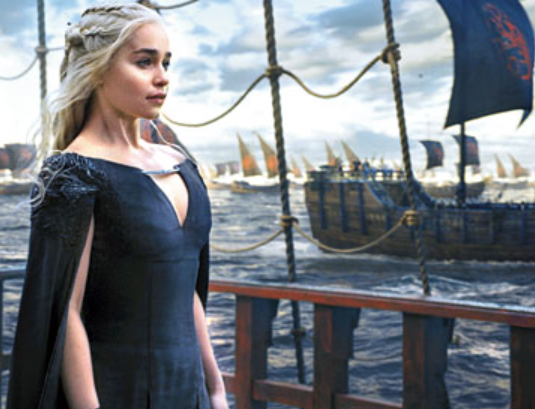 This quest closely parallels the story of Daenerys Targaryen whose intention throughout Game of Thrones was to sail home to the land of her family dynasty and reclaim the Iron Throne. 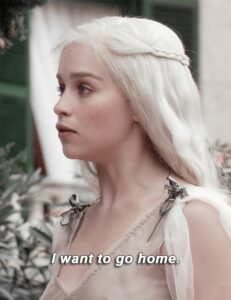 In fact, one of the first lines of dialogue spoken by Daenerys in the very first episode of the series was (referring to the land of her birth) “I want to go home”.

After writing this piece (and much after the Twitter thread upon which it is based) I discovered an article stating that Game of Thrones showrunners David Benioff and D.B. Weiss said that it was Arya’s homecoming scene in Season 7 which was inspired by Odysseus’ return to Ithaca in Homer’s Odyssey. The author of that article is skeptical of the comparison but notes some significant parallels between Arya and Odysseus, particularly that Arya (like Odysseus) delivers the punishment for violation of guest rights (see next section). If nothing else, the piece provides further validation that Homer’s Odyssey served as an inspiration for Game of Thrones. (2)

Guests and Hosts (Xenia)
“Xenia” is another major theme in The Odyssey that relates to the guest/host relationship or “guest friendship”. Xenia positions hospitality as a sacred duty– a stranger appearing at your home creates an immediate obligation to offer them shelter, food and comfort.

In Game of Thrones, there may not be the same strict responsibility, but there is a concept of “guest rights” which is a requirement that the host extends protection to guests under their roof, particularly after guests consume the host’s food or drink.

Though “guest rights” and Xenia may differ in terms of the scope of responsibilities, they are both considered strict guest/host codes, the violation of which brings the disdain of men, but more fatefully, the wrath of the gods.

The most notorious violation of guest rights in Game of Thrones was the horrifying Red Wedding in S3E9 after which (in S3E10) Bran Stark describes a legend about guest rights violation and concludes “that’s something the gods can’t forgive” foreshadowing serious consequences for the violators: House Frey. 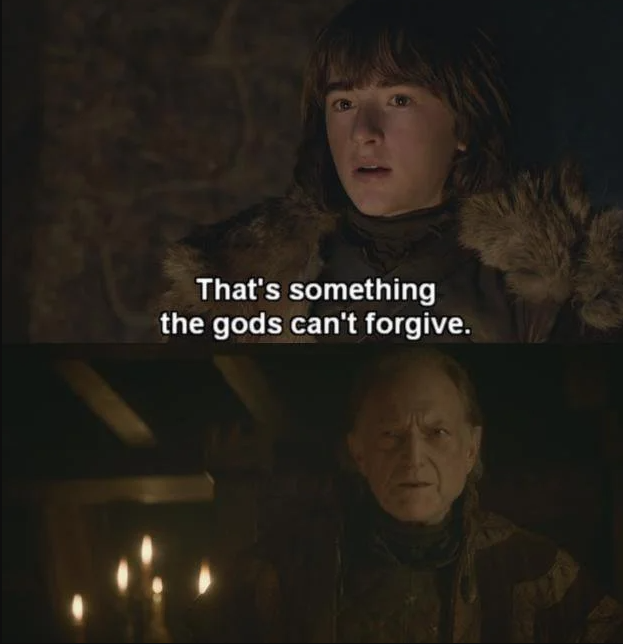 Similarly, in The Odyssey, the “Suitors” are obnoxious gluttonous guests in the house of Odysseus who are seeking to claim his wife in his absence. Their behavior as guests violates the Xenia hospitality offered by the host house of Odysseus (represented by his son Telemachus).

As a result of their ongoing offensive behavior, the Suitors are soon described by the Goddess Athena as having “dark death closing in on them, doomed all to die on a single day.” House Frey and the Suitors both violated the guest/host relationship (Guest Rights and Xenia) which deeply offended the gods, and resulted in the massacre of the violators.

Cleverness (Metia)
“Metia” is a theme or quality in The Odyssey that involves cleverness, wisdom, and craftiness. Consider Tyrion Lannister talking his way out of captivity or imminent danger throughout the series, and continuously expressing, imparting, or demonstrating wisdom and creative problem-solving. 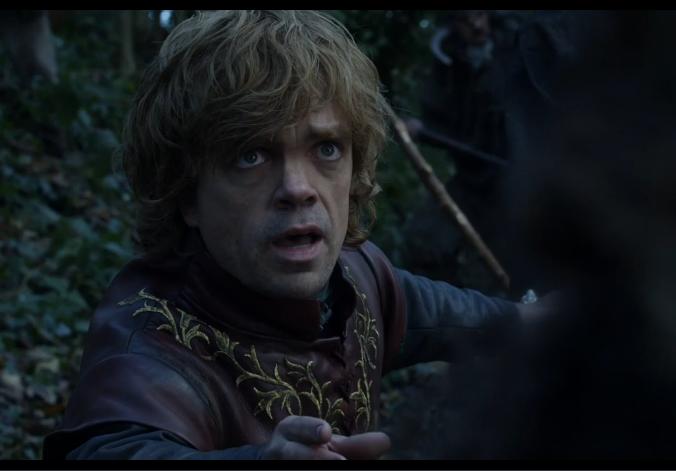 “Metis” is also a clever plan of which Tyrion had many, such as the trap he set for Stannis Baratheon’s forces at the Battle of Blackwater in S2E9, or his peace plan in S8E6 which brokered an arrangement among the major houses & created “a good story” that would unite the people and would curtail any further warring between the kingdoms.

Perhaps more so than any character in Game of Thrones, Tyrion provides the most consistent examples of Metia throughout the series. 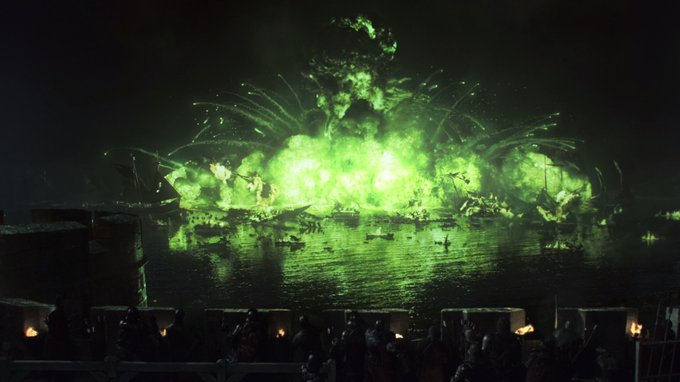 The Odyssey, translated and studied for many hundreds of years, likely provided inspiration for legions of subsequent stories and possibly served as a guide for specific characters, storylines and themes in Game of Thrones. The effects of a post-war world, nostos, xenia, and metia are woven throughout both tales and provide a lens through which to better appreciate these dense stories. In Part 2 (out next week) I note lines in The Odyssey that may not relate to any of these preceding themes, but were strikingly reminiscent of an element in Game of Thrones and further evidence that The Odyssey was one source of inspiration.