MARE OF EASTTOWN has had a long gestation period but it is about to upload to HBO’s services. In fact, the exact date is known – SUNDAY, April 18.

Starring Academy Award, Emmy and Golden Globe-winner Kate Winslet (HBO’s MILDRED PIERCE), from creator and writer Brad Ingelsby (The Way Back), with all episodes directed by Craig Zobel (HBO’s THE  LEFTOVERS), the seven-part limited series MARE OF EASTTOWN, debuts SUNDAY, APRIL 18 (10:00-11:00 ET/PT) on HBO and will be available to stream on HBO Max. This limited series stars Winslet as Mare Sheehan, a small-town Pennsylvania detective who investigates a local murder as life crumbles around her. MARE OF EASTTOWN is an exploration into the dark side of a close community and an authentic examination of how family and past tragedies can define our present.

In the crime drama, Winslet plays the titular Mare Sheehan a small-town Pennsylvania detective in Delaware County (or as the locals say, “Delco”). Over on Deadline, Winslet had this to say – “She’s nothing like me — that’s pretty scary in a great way if you’re an actor that likes to feel terrified and exposed. I just have never done anything like this and was excited to read something that gripped me right away. I really felt the sense of not only who she was but the world she lived in and comes from; that sense of community; being so entrenched in a society that you sort of forget who you are from time to time. “The story has so much heart in it and is rooted in truth,” she said. “It just really resonated with me.”

She also had something to say about the local accent. “This [accent] drove me crazy! There are varying degrees of it…the thing that was hardest for me was to do it well enough that you shouldn’t hear the act of doing. I hate it when you can hear someone doing an accent. That was one of the things that is more important to me than anything — just making it disappear and blend in.”

So, seek out the accent and enjoy the tale that is MARE OF EASTTOWN.  You know, it is nice to see Winslet’s return to HBO after a decade. The limited series will be on HBO Max, HBO – the app & HBO – the channel. Mark your calendar for 04.18.21 as not to miss her. 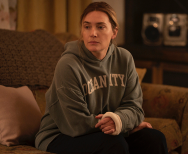