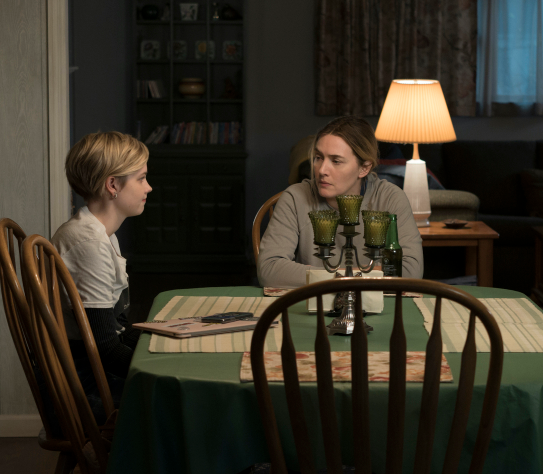 Prior to the last episode, I would have said ACAB but not Mare (Kate Winslet). HOWEVER, after planting drugs to try and keep custody of Drew (Izzy King), you’re on my naughty list. Oh Mare, so not cool and not super surprising you had your badge taken. You got lucky with just some counseling, so you best take it seriously. And isn’t that such a nod to how the justice system really operates?  She still hasn’t admitted it to her family and that’s not gonna be an easy conversation.  “What the hell is a family meeting?”  Bless you, Jean Smart. You are a treasure. Not surprisingly, her family thinks what she did was pretty stupid and they aren’t happy. Siobhan (Angourie Rice) admits that she and Becca called it quits. She doesn’t admit that she met someone else, even though Nana Smart asks. Oh dear, that’s coming back to bite someone. But for now, Mare has to go to grief counseling, which is gonna be a sh*t show.

Meanwhile, Dawn (Enid Graham) gets a disturbing phone call claiming Katie (Caitlin Houlahan) is still alive. They want five grand and you gotta wonder if this is real or not because honestly, I could see it going either way. Kidnappers wait long enough until they need funds, give her some basic evidence, and boom get the money from mom. Or someone just needs the cash, knows enough basic information to pass off that Katie is alive, and tries to get paid. Tricky circumstances, and I just ache for Dawn. Cancer, missing daughter, raising a granddaughter alone, I mean the woman needs a break. Speaking of break, Siobhan meets up with her 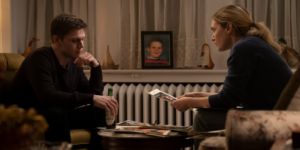 new flame and they end up in the basement making out and ends up being where Becca has come to talk to Siobhan about their relationship. Remember when I said it was gonna come back and bite someone? Turns out it is poor Granny Smart just trying to come down the stairs to the basement.  Ouch.

While Mare is on her break, Zabel (Evan Peters) who has no right in the world to look that good all clean-cut, is pressing on Deacon Mark (James McArdle) especially because some suspicious details about his transfer are coming to light. We know at the end of the last episode, that he dumped what looked a lot like Erin’s (Cailee Spaeny) bike into the river. So the priest is super sus, but part of me has a hard time connecting him to these other cases. I mean, two girls who got into drugs and prostitution and one who was a girl who needed money for her son’s surgery…well, yeah okay, of course, she made a website. “Trust me, teenage girls are fucking sneaky.” This line made me laugh so hard, because one, Mare is clearly speaking from experience as she was once a conniving teen girl, but also she has one of her own so she’s certain her daughter isn’t telling her everything. But Mare handles her daughter about the same way she handles therapy, loudly and brashly. Mare, if you gave yourself a chance, I bet things would go okay but I get that it isn’t easy opening up. But for crying out loud, your drug-addicted son with issues at one point attacked you for money for his habit. You can still love him now that he’s gone, but you gotta process that sh*t.  You’re not gonna be happy as a person alone or with the bevy of men trying to hit you up until you do. I recommend sticking with writer guy and not co-detective. Sorry, Zabel. Work and pleasure shouldn’t mix. 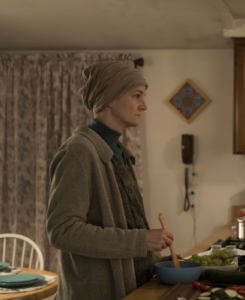 Dawn gets the money and prepares to hand it off. She has a little trick up her sleeve. It is very admirable, but I just have to wonder how easy it will be for him/them/whoever to kill her. She is a frail woman on cancer radiation! You shouldn’t be going anywhere alone. But it turns out it’s not the kidnappers, it is a scam, and it’s someone she knows pretty well. She doesn’t come clean to Bethy (Chinasa Ogbuagu) about any of it and I figure it won’t be long until someone finds out. But as for Katie, well she has a new friend.

Ok, so the CJ major and writer in me has got to break down some potentials here. Foremost, I personally don’t think the priest is connected to the other girls.  I think Erin was killed by Deacon Mark after transferring to the parish and getting her pregnant. I think someone else is abducting girls off the escort website and holding them. There is a possibility the two might be partners, but I don’t think so. I could be wrong, it certainly wouldn’t be the first time. Do you think Deacon Mark killed Erin or someone else? Who do you think is abducting these girls? But the biggest question is will you be tuning in Sunday, May 16th at 10 PM EST to see what happens next?