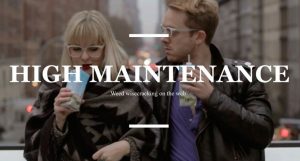 You all know about HIGH MAINTENANCE appearing on HBO Friday nights at 11:00pm, right? It is all about the customers weed delivery man “The Guy” meets around NYC as he delivers their purchases. You also know that it started out as a web series, right? They were featured on Vimeo, but now HBONow/Go has them. There are 19 webisodes total and most of them are titled after the customer seen in the clip.  Each edition only runs about ten minutes long and a minute or so of that time is opening comments from creators Ben Sinclair, who also plays The Guy and Katja Blichfeld.

Here is a crash course (oops, we hope you don’t crash too hard, if you know what I mean, like on bad stuff.) on those installments. They do not have to be seen in order or at all to understand and enjoy Season One of HBO’s continuation of HIGH MAINTENANCE.

Episode 01 “Stevie” – The Guy heads to a hotel for a delivery, and an anxious client turns the routine trip into a lengthy adventure. Well, as lengthy as a 7-minute run can be. He is out to simply make a transaction and get out. He pulls the order out of some SnapOn lid container and waits to be paid while Stevie babbles on and on while getting on & off her cell phone. It turns out that even after getting paid they still end up sitting and chatting. Episode 02 “Heidi” -The Guy delivers to a strangely familiar couple, just as they make a shocking discovery. A couple is shown at length cocooning over the weekend; they run out of food & weed. He calls for delivery from The Guy as she goes out for food. When shown a picture of the girl the boy is seeing The Guy informs him that she is known as “Homeless Heidi.” Oops! The acting wasn’t as strong in this one. Episode 03 “Jamie” – Terrified clients ask The Guy for more than just weed when a mouse appears in their apartment. Yeah, it seems these chicks are so freaked out by the mouse they got in a glue trap that they need to call The 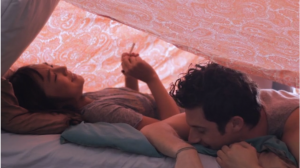 Guy. As they toke up they learn they don’t have the heart to kill it, but he does by asphyxiating it with weed smoke. Hah! Jamie turns out to be the mouse’s name. Episode 04 “Trixie” – A stressed-out couple calls The Guy after dealing with unruly subtenants. The first 4 ½ minutes show the perfect example of why you should never have subtenants share your shitty apartment. They have a difficult time being vocal about boundaries and rules until The Guy shows up to loosen them up a bit. A couple of hits and they once again control the domicile. Oh, and Trixie ends up being the gal’s Appalachian white trash stepmom. Episode 05 “Olivia” – The Guy receives a call from a contact he’d rather not deal with. On his phone they are listed as Assholes and they sure are. They grated on my nerves more than being funny, but that’s just me. They don’t even have money to pay for the delivery. So, The Guy has got to wait in the cold while they run for cash. In the end he blacklists them and that is okay by me. Olivia just happens to be a girl on the phone they trash talk.

Episode 06 “Helen” – The Guy delivers to a man who does not seem especially interested in buying weed. A sad sack of a dude, complete with a Helen Hunt obsession, lives a mundane life taking care of sickly mom Helen. He buys weed once a week form The Guy but we learn he never smokes them. He is just attracted to The Guy who is unfazed in his haze by the advances. Not very funny, but a great 9 minutes. Episode 07 “Dinah” – A couple receives a visit from a longtime friend; The Guy comes for dinner and a secret is revealed. To make a long story (a whole 13 minutes) short a dude named Chad shacks up with a couple to hit Dinah’s wedding and he brings a different girl home every night. One gal needs supplied and The Guy delivers and they all end up taking over the couple’s apartment and once the weed comes out some truths come out as well. In this case that is not good. Episode 08 “Jonathan” – A rising comedian has a traumatic experience at a show; The Guy offers a shoulder to lean on. This one casts a more serious tone. The comic Hannibal Buress (pictured) is not the same after gunshots were fired in the club he was performing at and he hasn’t been himself since. The Guy to the rescue though, not just with cannabis but wait…with a violent videogame?  Episode 9 “Elijah” – A chef asks The Guy to make a delivery; a holiday dinner quickly devolves into chaos. Oy, a Jewish holiday dinner gone to shit. The catered affair 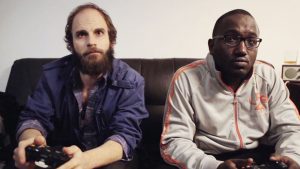 leaves the chef with no choice but get The Guy to make a delivery. He arrives just in time to learn about the prophet Elijah. This proves to be one of the best episodes actually and not a single joint was lit. Episode 10 “Brad Pitts” – A woman receives bad news and her friend calls The Guy for his special brand of assistance. As the intro to this episode states this is a look at marijuana as medical treatment. Good friend Ruth has contacts that can link her up with The Guy in order to help her sickly friend Ellen cut through the pain and finally eat something. Once high they call The Guy back in a panic with Ruth actually freaking out and Ellen gaining an appetite. The title is just a throwaway line mispronouncing the actor’s name.

Episode 11 “Qasim” – A woman dates a man from her cycling class who seems too good to be true; The Guy delivers on Halloween. A whopping 17 minutes long, but a good one in a quirky way. Katie hits it off with Scott. He is a workout pro with a unique regimen that unfolds in a montage. She finally gets him back to her place and she has The Guy, who is off having Halloween fun, make a delivery. Scott, body pure won’t imbibe, but she does and ends up telling her life story. When it comes around to his turn he unspools a long, odd lifestyle focusing on the teachings of Qasim. Scott proves personable but, out there and once again alone by episode’s end. Episode 12 “Matilda” – The Guy tries to juggle his clients’ needs with a visit to New York from his niece. For the first time, The Guy is the central character. He struggles to entertain his teen-aged niece who is visiting from out of town. He doesn’t want to conduct business in front of her, but when their plans to see the show “Matilda” get complicated, and many of The Guy’s kooky clients surface. It is a madcap time and his niece figures out what he does for a livi 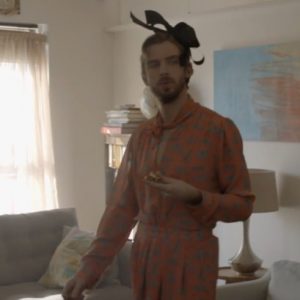 ng and it is no big deal. Episode 13 “Rachel” – A stay-at-home dad with writer’s block procrastinates by calling The Guy. Hey, to get your creative juices flowing you just need some weed, right? Ah, but the writer, played by Downton Abbey’s Dan Stevens (pictured), is spending more time home alone cross dressing. The Guy complements him on him sporting designs by Rachel and wonders how his wife likes it. We think she is going to explode about the cross dressing and she surprises her man early, but it turns out she is more annoyed smoking weed all day until he says The Guy gave him positive reinforcement and they saved her some weed. Surprise, all is good! Episode 14 “Ruth” – The Guy sets up two of his clients on a blind date, and the evening becomes hotter than expected. Oh, now we are playing matchmaker as The Guy sets up two clients but they don’t hit it off at first until, you know, they light up in a secluded spot in the park. Their second date is like no other. He invites her over and he is cooking spicy food that she can’t eat so they decide to go out. He hits the bathroom first and get hot chili juice in his eyes and on his sensitive genitals. Ouch. She soothes him with milk to cut the burn complete with a full shot of him dangling in a bowl of milk! Yep, you read that right. Episode 15 “Geiger” – A soon-to-be married couple deal with existential anxieties; The Guy is asked to sell weed by the pound. It is a bit odd to see the engaged couple obsessing over different things; she is planning the wedding and he is preparing for doomsday scenarios, complete with Geiger counter, thus the title. They are so stressed over their respective plans that a call to The Guy is in order. But this relationship is already too far gone as you will quickly discover.

Episode 16 “Genghis” – A nine-to-fiver leaves his cubicle job to become a teacher; The Guy offers some inspiration. Okay so this dude Evan is bored at his cubicle job and all of a sudden he is a teacher aide. The students of this inner city school are tough and disrespectful even as he tries to liven things up by roleplaying Genghis Kahn upon The Guy’s advice. Finally the students reduce him to his b 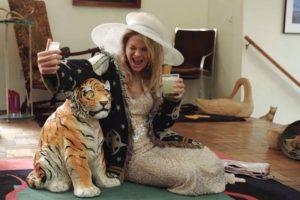 reaking point. Does Evan rally and if so how? Pot is not the answer. Episode 17 “Sufjan” – A neurotic couple gets priced out of their neighborhood; The Guy expands his delivery zone. So this couple wants to move to a cool neighborhood out from the city proper especially since Sufjan Stevens lives out there. When they discover he doesn’t and that other concerns aren’t ideal either the locale starts to lose its appeal. The Guy is to the rescue though as he will deliver a stash out that far, except that he is 2 ½ hours late driving the couple ape shit.
Episode 18 “Esme” – A hapless pot dealer chases her off-Broadway dreams; The Guy has a showdown. This is one of the best funny episodes of the whole thing. Esme should be a continuing adversary for The Guy for the HBO continuation of this series I think. She is his the best character this web series had. In fact, she is a jacked up drug dealer that is a better characterization than The Guy himself. Episode 19 “Sabrina” – The Guy travels upstate for the weekend with some new friends and a bag of magic mushrooms. It a fucked up bunch at Sabrina’s parent’s place and silly, quirky, funny for viewers. It is nice to know The Guy gets some time off.