Straight from an HBO Press Release Comes the news that The Guy is still in business. 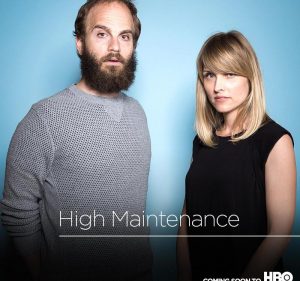 Providing a glimpse into the homes and routines of eccentric New Yorkers, the show explores the private lives of these unique individuals through a common thread: their weed deliveryman. Ben Sinclair stars as The Guy, whose client base includes a group of characters with neuroses as diverse as the city. HIGH MAINTENANCE was created by Katja Blichfeld and Ben Sinclair, who write and direct every episode of the first season, and executive produced by Katja Blichfeld, Ben Sinclair and Russell Gregory.

“The response to the new episodes exceeded all of our expectations,” said Bloys. “Ben and Katja are brilliant, unconventional storytellers and we’re excited to see what they dream up for us in our second season.”

HIGH MAINTENANCE kicked off its six-episode first season Sept. 16 on HBO, debuting new half-hours Fridays at 11:00 p.m. (ET/PT). The first episode was among the top five assets on HBO’s digital platforms in its first week of availability, and has a gross audience of two million viewers to date. The Sept. 23 audience for the second episode was up 6% in comparison to the premiere. Among the early critical raves, the Wall Street Journal hailed HIGH MAINTENANCE as “wry, smart, culturally immediate,” while NewYorker.com said the show has an “expansive warmth that is rare on TV.” The Boston Globe called the series “a faceted little gem,” and VanityFair.com described it as “compelling, surprising and intimate.”

Here perhaps are just two reasons why it was renewed. The Guy’s reactions through his haze are good ones! I’m just sayin’.