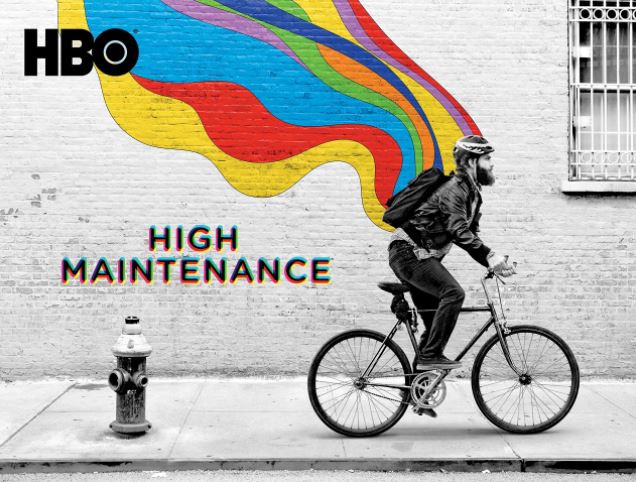 The Guy is giving up dope? Nope, but HBO is withdrawing us from HIGH MAINTENENCE. The show, created by Ben Sinclair, who also played The Guy, and Katja Blichfeld, gave HBO four seasons of the pot-comedy and a web-series before that.

The show, which took the Friday night at 11:00pm ET spot, ran its final season from 02.07.20 – 04.03.20 for eight episodes. In that last season The Guy kept up his job with an adopted dog as a tag-along and ended being stuck in the city over the holiday to celebrate Hanukah anyway he could. At least, the show did not end on any kind of cliffhanger. So, we can imagine him just keeping on his route with his little dog Fomo in tow and easing everyone’s woes through a pandemic with his little bag of goodies.

HBO stated that “Co-creators Katja Blichfeld and Ben Sinclair have decided to take a break from producing High Maintenance to pursue other projects. We look forward to hearing what they come up with next.” The duo stepping out was not the expectation back when Season Four was running. Bustle has curated comments from the filmmaking couple that the story of The Guy and his little business could go on for a long time as it centers on the diversity of characters that cross his path. However, Sinclair did note that “I think we need a break, but I don’t think it’s the last season.” He also said, “Is there a situation in which I want to be doing this show for 20 years, and for each of those 20 years it’s a ten-month-long job? I probably want a little more time to just go be a human being and live a life.”

Well, he got his wish there. It sounds like Blichfeld & Sinclair want to take a break but do not out rule a return to HIGH MAINTENANCE someday. Also, we can hope for whatever new content they develop that it will also have a home on HBO. Plus, you can always feel the effects of HIGH MAINTENANCE by finding it on the streaming sites. Thanks, Guy for a great toke!