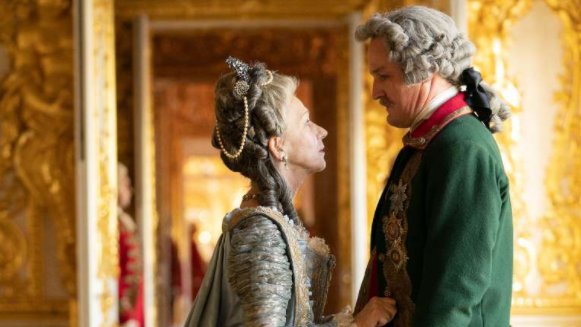 The penultimate episode of Catherine the Great pulls viewers deeper into the tumultuous relationship between Catherine and Grigory Potemkin. Grigory longs for adventure and expanding the Russian empire, while Catherine wants to maintain and cultivate the empire presently in her control. When there is trouble in paradise, Grigory continues to confide in Countess Bruce all the while never degrading their friend Catherine. However, they explore avenues to reconcile personal issues with her. And this is the strength of HBO’s newest miniseries: Personal turmoil. The inner struggles of the main characters are a dichotomy of emotions.  Potemkin and Catherine ultimately decide to learn to live with and without each other and to never have jealously. This agreement appears to be effective, for, in one humorous scene, Catherine kicks out a handsome young secretary after sex, when Grigory wants to spend time with the heiress. He is simply content to have Catherine when she is not occupied with someone else, and Catherine is content with being her number one when he is not off capturing new territory for the empire. 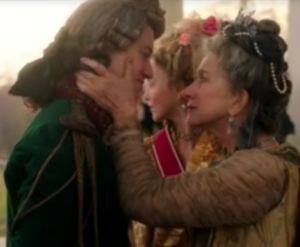 In one troubling yet heartfelt scene, Catherine comforts her son Paul after the death of his wife and son during childbirth. Paul is understandably distraught for days; however, Catherine snaps him out of depression by unveiling that his wife was cheating on him with his best friend and that the deceased child may not have been his offspring as a result. Catherine tasks her foreign minister, Nikita Panin, with finding a new bride for Paul. After Panin finds a prospective wife that both Catherine and Paul like, he is dismissed for attempting to influence the young Prince to overthrow Catherine. Unlike other high concept miniseries, Catherine the Great is relatively bloodless, save for the aftermath of battles, and the beheading of a major political in the first episode. This does not mean that viewers will not feel the tension, just don’t expect to see the jarring war scenes and swordplay.  The tension is with the intentions of Catherine and those who oppose Catherine as clearly witnessed in the Empress/Panin scene.

In the last segment of Episode III, Grigory has seized a region of modern-day Ukraine that he names Sevastopol. In addition to Sevastopol, he presents his lover with a great Russian fleet, an armada capable of facing any force on the water. Catherine is in awe of what he has given her, and the episode concludes with the fleet firing artillery into the black sea, showcasing its potential to their ultimate commander, Catherine the Great. He does it all for her.

Episode IV takes us to the conclusion of Catherine the Great. History buffs already know her fate and that of her empire. Casual viewers will have to watch until the end credits to witness the maintaining or loss of what Catherine loves the most: Power.