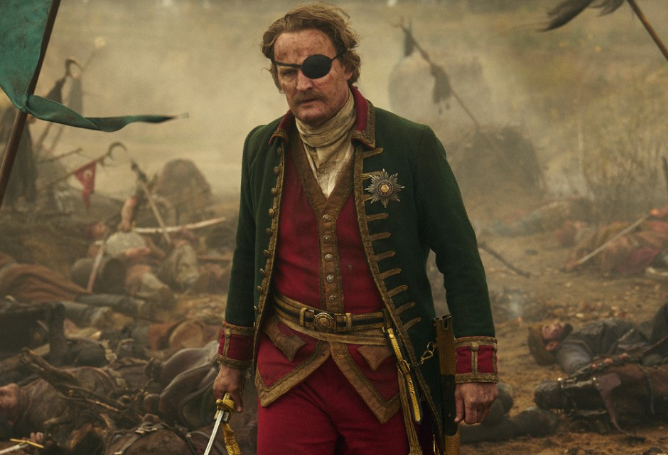 The first episode of Catherine the Great opted not to depict the turbulent seat exchanges of the monarchy and thrust the audience right into Catherine’s first year of ruling Russia. Part II picks up two years after the ousting (and evident execution) of the titular character’s husband Peter III. Catherine continues to receive backlash from her son for the dethroning of his father, and her head is on a swivel with the mounting internal and external threats. She has very few people that she can trust, save for her apprehensive but loyal foreign minister, Nikita Panin; lifelong friend Countess Bruce, and military commander Grigory Potemkin.  Regarding, the latter two individuals, HBO gives us one of the strangest love triangles ever put on the small screen. Where else do you see a woman of high confidence and prominence, willingly assist a lover to get in bed with another woman of higher prominence?

Countess Bruce and now Major General Potemkin (above), have quite the healthy friends-with-benefits relationship, despite Potemkin wanting to be with Catherine.  Countess Bruce (right) genuinely seems to want Potemkin and Catherine to be a ruling couple. However, Catherine has been in bed with a young ambitious officer, one Grigory Orlov, while the other Grigory has been successfully battling the Ottoman Empire. Yearning for Major General Potemkin’s return, 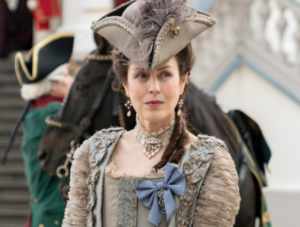 she abruptly ends the relationship with Orlov, and requests that Potemkin allow the other commanders to finish off the crippled Ottomans. After a few weeks, Potemkin obeys his monarch and returns to the palace.  Here mind games and games of tempting unfold between Potemkin and Catherine. This is interrupted by a serious threat to the throne. Yemelyan Pugachev, is leading an ever-expanding insurrection against the current monarch. Pugachev can be branded a lunatic, but he is of great intelligence and persuasion.  Catherine sends Potemkin to handle the situation, which he handles briskly, bringing Pugachev (below) back in a cage to be dealt with Catherine at a later time. Pugachev’s actions have still been a thorn in the side of Catherine.  He pointed out her inability to appease the serfs and abolish slavery throughout the Russian Empire. 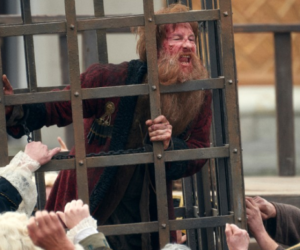 Catherine and Potemkin share an intimate moment alone in Catherine’s luxurious quarter.  She confesses her love but is upfront with one important matter:  Catherine will NEVER share her throne. This is not a shock to Potemkin, who simply wants to be in her presence personally and professionally and to have strong military authority. Internally, Catherine will have to personally deal with her son, who may be in the early stages of planning a coup. Catherine sternly warns her only offspring that she knows his intents, yet she wants him to voice his concerns in the form of prose and acknowledges that he may rule someday.  This may be a ploy to keep the young man busy, or it could be a genuine inquiry into his intentions for the Russian Empire.

This series places much of its narrative on the relationship between Catherine and Potemkin.  The production is impressive, but we mostly see the aftermath of battles, rather than actual combat. Therefore, the intricacy of Catherine and Potemkin’s dynamic must increase with each episode to hold interest. Thus far, the writing and performances of this series hold my interest. How about you?

Part III of Catherine the Great airs on HBO on November 4th.