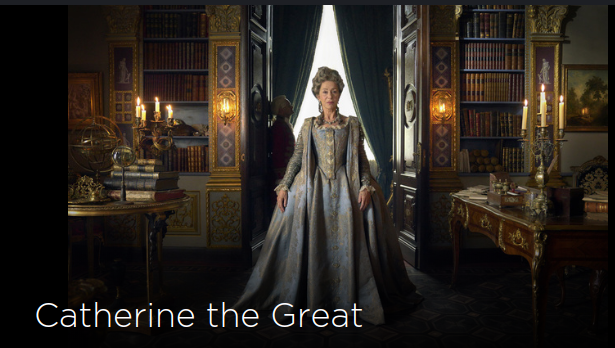 As with any female monarch, especially those who ruled in the past, Catherine of Russia is no simpering wench. She doesn’t have doe eyes and hearts floating around her head. This is a woman who had her own husband overthrown, so she could seize power and rule for almost thirty years in a country that was fraught with political and military tension. The fact that Catherine was a woman – and a forward-thinking one – is a raw portrait of a woman in power. Do you think anyone back a few hundred years wanted to hand a female power?! Nope! So, Catherine, like many before her (Eleanor of Aquitaine; Elizabeth I and Boudicca) patiently waited, plotted and used the opportunities presented to take a firm hold on power and reign with an iron fist.

In those first few moments of the story, we see Helen Mirren dressed up as Catherine -the first line she utters, “Do you know who I am?” with regal authority. The costumes, the locations and the courtly intrigue draw you in. Catherine’s withering stare at a prisoner gives you the impression of just how powerful this woman really was. Schooled in the hard knocks of life, Catherine can sniff out the kiss-asses and the disloyal servants around her. I think she doesn’t get enough credit when she singles out of officer, immediately suspicious of him. She’s on immediate suspicion of a young prisoner she meets. Everyone, no matter how close or far fetched their claim may be, is a threat to Catherine. And she’s not having any of it.

Catherine was born into a ruling German aristocratic family and was married (as was the custom back then) to the heir apparent of the royal Russian family that ruled in the 1740s and 1750s. Catherine wasn’t interested in needlework or dancing lessons; she was interested in taking the throne and keeping it, no matter the cost. Catherine had children with her deceased husband and one, the heir Paul, is on the cusp of adulthood. Remember that sons inherited property and titles back then, while daughters were married off to men of standing and monetary stature. After Catherine took the throne and had her husband dealt with (he mysteriously disappeared and was murdered…how convenient), she never remarried. She knew that once the crown was hers, the power also belonged to her and she had no desire to share it. After all, power shared is power halved. Catherine, in my humble opinion, never did anything by half. 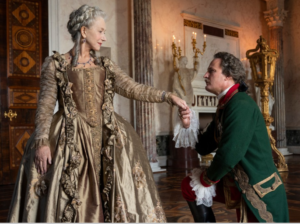 Another shocking thing about Catherine is that, as a mature monarch well into her 60’s, she actually enjoyed having intimate relationships with men. In other words, this is a woman who enjoyed having sexual relations with a man in a time where it was the men who went out, sowed their wild oats and had a good time, without so much as a worry in the world about what it would do to their reputation. A monarch is supposed to be held to higher standards. A Prince or King can also do as he likes. A Princess or Queen should be meek, modest, never an attention seeker and any such woman’s sole role was to be eye candy to her husband and to have children with him. And that’s it; not to make decisions regarding taxation, the military or having meetings with politicians and keeping them in check. Oh, the horror and shock of it all: a woman with a brain, backbone and the political savvy to stand her ground!

Catherine has just recently ended one liaison with  Grigory Orlov (Richard Roxburgh) when another man, Lieutenant Grigory Potemkin (Jason Clarke, pictured right), catches her eye. The two complement each other and I feel sorry for anyone who gets in their way. The attraction between the two is palpable and it makes Orlov seethe with indignation. He helped put her on the throne and has been unsuccessful in getting Catherine into a legal and binding union – marriage – and Catherine is cannier than most men give her credit for. She knows Orlov wants absolute power and outmaneuvers him one way or another. 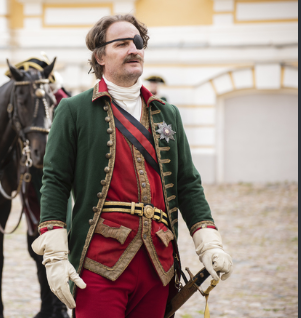 Because of her gender, Catherine understands that she has enemies all around her, watching and waiting for her to make one blunder or another, or to plot against her and take the crown away. Simply because she was a woman or was it because powerful women intimidated weak men? Her former lover covets the throne and her son is no better. Everyone close to the throne wants it for themselves. Catherine is shrewd can often see through people. Everyone wants her attention for one cause or another and we all know people try to flatter their way into the private audiences of a King or Queen because they want something.

When people come to court, they have a ton of ambition and it’s just a matter of who they can use, manipulate and exploit to achieve their own goals. The court is not for the faint of heart. People are beaten, thrown in jail or even murdered at the whims of powerful people. We see Orlov and his brother take their pent-up frustrations out on Potemkin. We see Catherine stand coldly, as she watches an officer being executed. We see Catherine’s lady-in-waiting sleep with Potemkin, in order to secure information and pique his interest in Catherine. A court is a vile place and a person becomes hardened and jaded. You can’t trust anyone. To be the ruler of a great nation, you’ve got to have eyes in the back of your head and eyes and ears everywhere. For Catherine, it’s doubly so because she is a woman. She’s the center of the court and at any given moment, her power can be taken away from her. She understands that in order to rule, she must be ruthless. And Helen Mirren brings it all out quite well in front of all the opulence and formality. If this is the first episode, I can’t wait to see the rest of the series.

You can find Catherine The Great on HBO Monday nights at 10:00pm and on HBONow/Go.