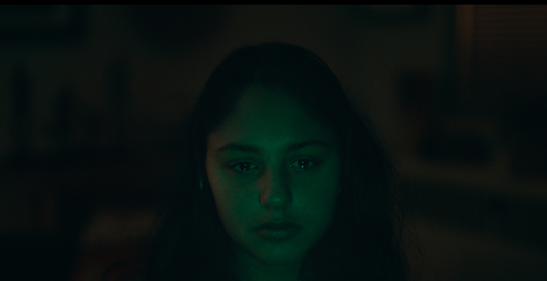 First, EUPHORIA comes along and gives us a good strong dose of what the latest teen scene is all about for some. But to me, and granted I’m a lot older than that set, it does not seem to depict the Gen Z crowd I observe from my neck of the woods. The youth of Zendaya’s show are more diversified, more progressive, more independent and bolder than the ones I know and more so than the ones seen in HBO Films: SHARE. I find the characters, the situation and the scene much more familiar and that is a plus for the story that writer/director Pippa Bianco, created. It isn’t sensationalistic and/or controversial TV, but a truthful and more relatable account of the way things are. And, in my opinion, that kind of approach to the top issues in this film are the way to go.

SHARE started out its life as a short film that made the rounds and garnered an award at the Cannes Film Festival. SHARE’s message is a strong one that needs to be told and the more outreach from such a film the better and in joint with A24, HBO Films did just that via this 87-minute adaptation. The movie (as HBO describes it) gives us Mandy (Rhianne Barreto), a 16-year-old athlete whose world is upended when she discovers a disturbing video from a night she doesn’t remember. As the video – which features a vulnerable, unconscious Mandy – begins to circulate among her community, Mandy desperately attempts to recover her memories of that night, while navigating the throes of an invasive public. 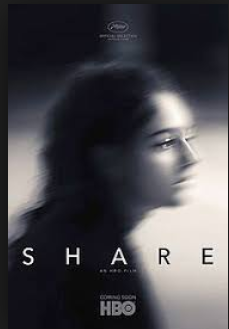 SHARE opens with Mandy awakening on her front yard after a night of heavy partying. She later learns via social media that an incident occurred the night before that will impact her greatly yet will remain a mystery. She doesn’t remember what happened and just as she doesn’t remember the details the viewer is never fully given them either. All she & we know is that she was lying on a bathroom floor with her pants down while unconscious. She was clearly humiliated and bruised so she was assaulted. That’s bad enough, but was she sexually assaulted too? What happened and by whom?

As you’d expect those thoughts consumed her waking moments. Miss Baretto dug in and drew out some raw, strong emotions at times and at others she gave us the exact opposite. There were many scenes where she just gave a sense of malaise or stupor as her character internalized everything. A few times she’d snap out vocally and at times she’d shed a few tears, but most of the time we witnessed silent moments giving the viewer time to ponder just what was running through her mind. Adding to Mandy’s anguish is the way she was treated in school. Loyal friends exist but most whisper about her. Her basketball mates help ground this show in realism I think and do it far better than EUPHORIA. All the attention escalates enough to warrant her suspension from school because she has become a distraction. Mandy just wants to continue on as normally as she can but the world around her is doing what the world does.

To her advantage I think is a healthy home life. She has understanding parents without saddling burdens of their own just focusing on what is best for their daughter. Poorna Jagannathan (THE NIGHT OF, BIG LITTLE LIES) and J. C. Mackenzie (BIG LOVE, VINYL) really invest love, thought and time to work through the issue including getting the police involved. Mandy’s parents, Kerri & Mickey Lundy, want the perpetrators punished, but they also want to listen to what Mandy wants to happen. It takes a little longer for Mickey to move past anger and listen to his daughter. Kerri has a great speech for Mandy that it was all because he is a male and that only women condition themselves to brace for the type of situation that befell her daughter because it only happens to the female gender. SHARE is just as much about how the family deals with the trauma as the victim and thankfully the family is more articulate than the victim. Poor Mandy is traumatized and in shock. 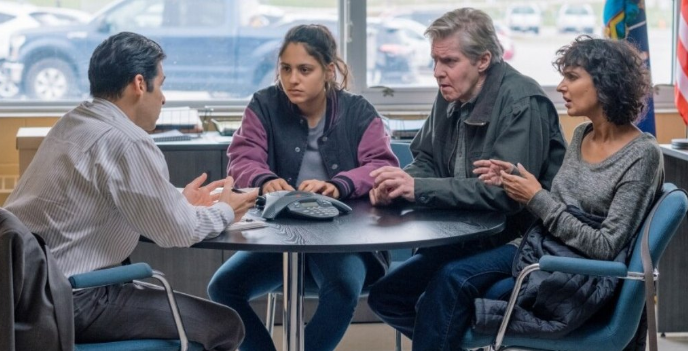 She, of course, has every right to be and though it is quite a realistic response it gets a little old. So, to me, while the story is far too important not to tell I’m not sure the way it was told was perfect. SHARE might have served more effective as a short film because the pacing was not good in the movie. Some scenes, though moody and artistic, just seem like padding to make the work full length. How many scenes, (I wish I counted them) do you need of distant, distraught Mandy staring out windows, broken and conflicted? Again, well-executed, mood music and all, but too many of them leave the viewer tired of trying to figure out what’s in her mind.

That opinion does not mean you should not see HBO Films: SHARE. It holds up as a realistic examination of the types of situation Mandy faces. It is all too frequent and all to devastating. Mandy seems to make it so far but you are left to wonder if she will be alright. I am purposely vague here because I rather you seek out SHARE on HBO or HBONow/Go for yourself to try to get into her dilemma and her head.