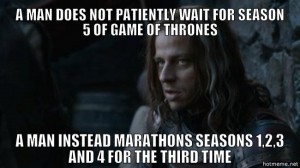 There’s no such thing as a true spoiler in Game of Thrones since the television series is based on a series of books that is already published but that doesn’t stop the show only fan’s hearts from dropping when possible book spoilers, or even show spoilers surface. Early this morning it was announced that episodes from tonight’s upcoming Season 5 were leaked on an illegal downloading site. Which means the world is about to get a lot more spoiler happy and a lot of us will be super careful about what we click on in the near future.

If you’re one of the people tempted to search online for these illegal episodes instead of waiting the few hours until tonight’s epic premiere, here’s a few reasons why you should hold off with the rest of us.

We hope you’re all looking forward to the episode as much as we are. Stay tuned to HBOWatch for a review of tonight’s episode and let us know what you’re hoping to see in the comments.